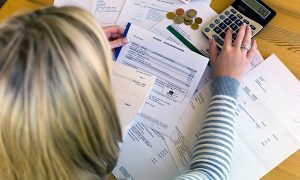 After your file bankruptcy, you can expect your credit score to suffer. There’s nothing you can do about it, because that’s just how the system works.

On the other side of the coin, don’t feel like you are going to be completely without options as far as getting a credit card is concerned. Because nothing could be further from the truth. You can get a credit card after bankruptcy has been filed.

As you can imagine, it will be much harder to get approved for a card once you’ve filed for bankruptcy though. The bankruptcy is going to be on your credit report, and lenders are going to look at it as a major factor of consideration when determining whether or not they will grant you a card.

All Credit Card Issuers Have Their Own Specific Policies

Regarding bankruptcy, every credit card issuer is going to have their own specific policies that they follow as far as granting credit cards are concerned.

As an example, let’s take a look at Capital One’s policies. If you look on their website, it clearly states that if a person has a non-discharged bankruptcy on their record, they should not apply for a credit card because they do not qualify.

What is a non-discharged bankruptcy? It’s the kind of bankruptcy that is currently considered unresolved.

Unfortunately, it’s not always easy to figure out whether or not it’s worth it to apply for a card if you’ve had to file for bankruptcy. Many of the card issuers do not clearly state their specific criteria for approval or denial. For the most part, applicants aren’t going to find out if they come close to qualifying until they get a letter in the mail saying they’ve been approved or denied.

Another thing, if you apply for a credit card, it’s certainly possible that you could see a hard inquiry from the potential lender on your credit report. Remember, credit card companies take more into consideration than whether or not you have a high credit score.

Having a bankruptcy on your record is certainly going to be an issue for many lenders, and for the most part you’ll have a difficult time getting approval. According to Consolidated Credit, a consolidated credit solution review site, “In order to get a good interest rate on a loan or qualify for the 0 percent promotional offer, you will need to have good credit.”

In fact, as far as unsecured credit is concerned, it’s going to be nearly impossible to get it if you have a bankruptcy on your record. But there is light at the end of the tunnel.

Applying for a Secured Credit Card

What is a secured credit card?

A secured card is a card issued to a borrower that grants them credit in the amount that they have deposited beforehand. As an example, to make this clear, let’s say that you’ve put down $1000 as a deposit on your credit card.

More often than not, the company will not go over the thousand dollar limit because they are afraid that you are a credit risk. They want to protect their investment in case you stop paying your bill, so they are only willing to extend credit for as much as you have deposited.

That’s where the security comes in for the credit card company. By giving them $1000 ahead of time, they know that they can immediately recoup their investment if you default on your credit card payments.

That’s the best way to apply for a credit card after you’ve filed for bankruptcy.

When to File for Bankruptcy?

In the infographic below we provide you the most common reasons for filing for bankruptcy: you are our of work, your home is going to be foreclosed, your credit debt is huge, etc. Read more below.