Imagine having to walk half an hour to collect clean drinking water, or worse, walking the same distance for water that is dirty and diseased. This is the reality for close to 300 million people in sub-Saharan Africa. In 2000 the United Nations introduced the Millennium Development goals. 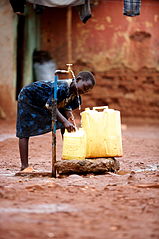 Once such challenge is wide spread corruption both at the national, and local levels. Bribes to government officials are still commonplace in Africa. As a result funds are not allocated where they are needed the most. There is no middle class to speak of in sub-Saharan Africa. Those that control the wealth use it to line their own pockets, and the people that need help the most continue to be ignored.

This makes many richer nations cautious in their approach to aid for Africa. The aid they do provide quite often never gets to those that need it. Some of the more successful aid ventures include actual volunteers that have gone to rural Africa to drill wells and build pumps that provide clean water. Even in these instances, the volunteers still have to fight through considerable red tape, and this can prove discouraging for many.

When they can find a way around the corruption, aid workers still face many other challenges. Not least of which is the arid climate of sub-Saharan Africa. The amount of rainfall in Africa is not significantly less than that of the other continents, but the rapid rate of evaporation due to the arid climate makes it difficult to take advantage of this. Water does not remain on the ground for long in Africa.

One possible solution to this is the use of rain barrels for the capture of this rain water to be stored in a shaded area for later use. The donation of items such as rain barrels would also offer another way around some of the corruption. Items like these are not all that useful for many other purposes. If African’s can make greater use of this available rainwater they may be able to solve another issue facing much of rural Africa.

Due to this chronic water shortage sub-Saharan Africans face they often have to choose between clean drinking water, and water for their crops. Most rural Africans rely on food they grow themselves to survive. In fact, more than 70% of the water they use is for the purpose of growing crops. Having to choose between eating and drinking is not something that any of us should have to do.

One might immediately think the solution is to use the clean sources of water as the drinking water, and use less pure sources of water for the crops. This is not a viable solution. Using contaminated water to grow crops is just as dangerous as drinking contaminated water. Both practises will lead to consistent outbreaks of disease and a high mortality rate. Tapping into clean ground water by drilling wells and building pumps, as well as using rain barrels, offers an overall approach that can help Africa come closer to achieving the Millennium Development Goals. 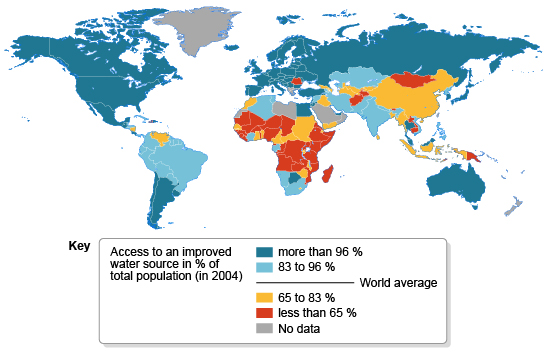 Another problem sub-Saharan Africa faces is the lack of regional cooperation, and lack of infrastructure between major centres. It’s not hard to picture how goods are transported in the western world. In North America and Europe a vast network of paved roads and rails connect one country to the next. In Africa these networks are usually very poor, or don’t exist at all. This makes it hard to transport much needed aid and materials for improving access to water across many of the hardest hit areas of Africa.

There are signs that this situation is improving. In particular organizations such as the East African Union are implementing policies to improve cooperation across borders, and improve infrastructure. If this type of cooperation can be expanded to include more nations in sub-Saharan Africa, there is hope that Africa can surpass the goal of 75% of people in the region having access to clean water.

Not all countries in sub-Saharan Africa have failed to reach the goals for access to clean water set out in the Millennium Development goals. Countries such as Namibia and South Africa are meeting and exceeding these goals. The key is to look at these nations and understand what they are doing right. When compared to other nations in Southern Africa, these countries boast relatively stable governments and better overall infrastructure. Stable, strong governments are a must if Africa is to make real progress.

It is clear sub-Saharan Africa is falling well short of the Millennium Development targets set out for the region for access to clean drinking water by 2015. This does not mean it’s a lost cause. With increased regional cooperation, growth of stable governments, reductions in the level of corruption, and the introduction of new technologies for access to clean water, Africa can turn the corner. The problems facing the region are difficult, but not insurmountable.

Dereck Lee is author at LeraBlog. The author's views are entirely their own and may not reflect the views and opinions of LeraBlog staff.