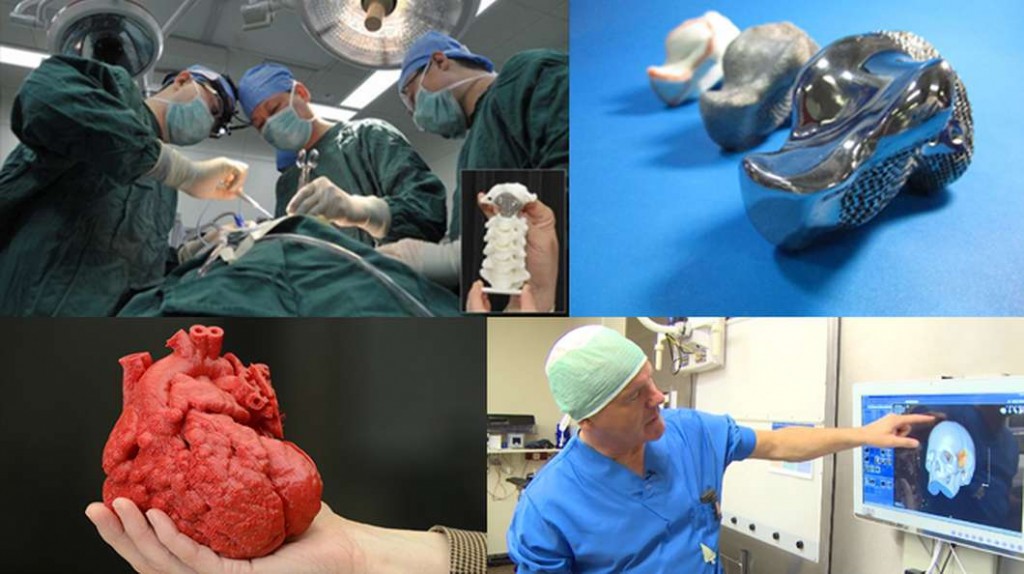 Though 3D printed items like pizza and chocolate is satisfying for most, it still holds a lot of unfulfilled potential. No doubt we are enthusiastic about these advancements, but we are chiefly excited about the advancements made in medicine. This is the domain where 3D printing casts significant impact. The capacity to produce medical devices and customized implants tailored specially for patients has opened up a different kind of possibility in the field of medicine.

Let's check out on some of the significant life-changing procedures that emerged in the course of the last few years and have been made possible with the aid of 3D printing technology.

Recently, the removal of a man's upper jaw owing to cancer saw parts of both his nose and mouth exposed. It got worse after a few weeks of radiotherapy during which he developed fibrosis and lockjaw, impacting the ability to open mouth. The specialists used CT scan to reconstruct the man's face. The replica of his mouth was 3D printed and then used as a template for producing a wax model. It was then hardened and fitted with teeth. Thanks to the new prosthesis; now he can swallow, chew, speak and smile without difficulty.

A 22 year old woman was suffering from a condition that led her skull to thicken. The specialists opined for a partial implant. This has been used before too when parts of the skull were got rid of to reduce pressure on the brain. But the cemented versions were not a great fit always.

The surgeons worked in communion with an implant company of Australia for creating a 3D model of the skull of the patient, printing an implant that will be the exact fit. This has major advantages. It's not just cosmetic. The patients often enjoy better functioning of the brain as compared to the old method. While increasing brain pressure threatened to impair coordination of the patient as well as other brain functions, 3D printed implant ensured her complete recovery.

This surgery is an extremely complex process used for treating patients with conditions like spinal instability and disc degeneration. The spine cage is an important tool in this process. It's actually a medical device serving as a replacement for the damaged discs. By 3D printing the spine cage tailored according to the anatomy of the patient, a team of surgeons in France implanted it in the back of a woman with great results.

“The intersomatic cage, specifically printed by Medicrea for my patient, positioned itself automatically in the natural space between the vertebrae and molded ideally with the spine by joining intimately with the end plates, despite their relative asymmetry and irregularity,” Dr. Vincent Fiere said after performing the surgery.

3D printing is increasingly implemented in the operating rooms today with the surgeons turning to the technology for creating tailor-made implants. The surgeons of Southampton General Hospital printed a hip joint for Meryl Richards, making use of her own stem cells to hold it in place. This 71 year old woman had several hip replacements before, leaving one of her legs shorter than the other. She was unable to walk in the absence of crutches. Without this surgery, she would have been confined to a wheelchair for life.

Surgeons recently removed a cancerous vertebra of a 12 year old Chinese boy. The spinal experts had found out that the boy developed a malignant tumor on the second vertebra in his neck. In a 5 hour long process, the surgeons got rid of the cancerous vertebra replacing it with a 3D printed implant. Titanium screws were used to secure the artificial vertebra in place. This also involved cleaning the nerves, the carotid arteries, and the spinal cord of cancerous tissues. The specialists mentioned it to be a major improvement and enabled a fast recovery time.

A 71 year old man in Australia was threatened with amputation below knees after he was diagnosed with cancer in his heel bone. While exhausting the options, the surgeons had been exploring the possibility of producing 3D printed implant in an attempt to save the lower leg of the patient. Making use of schematics of heel bone, titanium implant was printed and then inserted into his foot. Now, he is said to be recovering perfectly and can also place some weight on the heel.

A toddler's life was saved with the aid of a 3D printer. Mina Khan was born with a hole between chambers of her heart. She was breathless and found it hard to eat. The doctors of St Thomas’ Hospital in London made a copy of her heart including the defect. This allowed the surgeons to start the procedure with a much better idea of the things to expect. Helping with being more precise, the 3D printed practice organs will be in vogue soon.

These are just the tip of the iceberg if we consider the benefits 3D printing will usher in the field of medicine. It will be interesting to note the way this technology develops in the future and transforms the medical world.