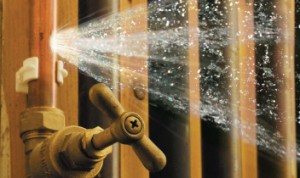 For those who haven’t seen a bursting pipe or a damage pipe that caused it to burst, then, they are lucky. This situation often happens at home. Its effect can be very disastrous, especially when it’s inside the home. Since water is too powerful, to prevent it is the best way. This means that it’s a must to take simple, yet effective actions to ensure the pipes do not freeze and burst. A house that is poorly insulated can protect pipes, since the conditioned air maintains the wall cavity above the freezing point. But when it’s very cold, it might be difficult to defeat the weather; the water in the pipes begins to freeze.

Ways to Protect Pipes from Bursting

It’s always easy to drain and shut off garden hoses. Make sure that you have a shut-off valve in the house near the garden hose supply. Shut it off during autumn. And outside, you should open the spigot, then, remove your garden hose. You also need to drain the sprinkler system.

It’s very helpful to insulate the wall cavities. If you are remodeling the entire room, you need to add more insulation. In some cases, insulation could be blown into the wall cavity, but it should surround the pipe for it to be effective. Additionally, you need to insulate areas where the pipes get in and out. You can make use of spray foam insulation. This will knock down drafts, while keeping the colder parts of the house warmer.

The majority of home stores sells a heat tape. You need to wrap this tape around the pipe, then, plug into the receptacle. This is effective for crawlspaces and garages.

If the above options are impossible, you can choose to open your taps for hot and cold water so they trickle. This will keep your pipes from freezing since the water is freely moving.

If the room gets cold, you need to keep the door of that open. If the same problem happens below the kitchen counter, make sure to keep the cabinet door open.

If you will go on a vacation, do not forget to turn off the main water supply. At the same time, open the faucets to drain the system. And when you return home, leave them open and turn on the main water switch. This will allow the water to run freely until the air gets out of the system.

If you have frozen pipes that haven’t burst yet, take a quick action. This will depend on where your pipes freeze, but in general, heat the pipes back if possible to avert the disaster.

If the faucet on your sink does not release water, this could mean that the pipe is full of ice. And there is a tendency that it’s frozen somewhere upstream. If you can access them, blow hot air from a heat gun or blow dry to melt what’s blocking it and get it out.

If you have plans to renovate the house, it’s a must to consider your pipes to avoid potential problems. And even if not, make sure to have them checked from time to time to avoid expenses and burst pipe repair.

VictoriaBrowlie is author at LeraBlog. The author's views are entirely their own and may not reflect the views and opinions of LeraBlog staff.