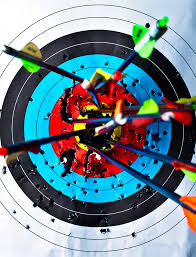 Archery has evolved significantly over the years - from a skill for warfare and a mean of recreation in the earlier days to a tension-packed game in recent times. Since the demand for learning archery is increasing with every passing day, the need to set up more up-to-date facilities is increasing to keep pace with the demand. Most importantly, people of all ages are becoming interested in this game, which requires artistic skills as well as a few techniques.

If you are planning to set up an archery facility, it is essential to know the primary archery terms. Here's a sneak peek:

To set up the archery facilities, the first thing that one needs to make sure is that the practice area is safe enough. It is obvious that during shooting, the field needs to be free from all obstacles, be it human or pet. But apart from that there are some other ground rules that needs to be followed. Here's a quick look:

There has to be a different field orientation. The environment of indoors where archers will practice will be different from the outdoor practice field. Hence, it is necessary to make the indoor space more like its outdoor counterpart. However, it is necessary to keep the sun in mind when planning an outdoor space. If the sun rays fall in the eyes of the archer, then it will prevent him from shooting at the right direction. And the movement of the sun from morning to evening as well as the need of both left handed and right handed archers should also be considered.

There has to be a barrier of a height of 4 meters behind the target. It will make the spectator area a safer zone. In case of outdoor fields, one can use natural feature of the field to reduce these areas. The height of 4 meters is enough to prevent the arrow from going in some wrong direction. If the distance between the shooting line and the target increases, then it is wise to lengthen the space between the target and the barrier. But to maintain balance, the height of the target barrier can be lessened as well.

An indoor facility can be set up in those countries or areas where the weather is not apt for outdoor practice. In countries having extreme weather, it is essential to set up an indoor practice field to provide a better ambiance for learning.

To set up an indoor facility, one has to undertake a few measures. It can provide the utmost security, which is required at the archery set up.

The facility will provide the enthusiasts an opportunity to learn and explore. But before that, the priority should be safety of the archers and the spectators as well.