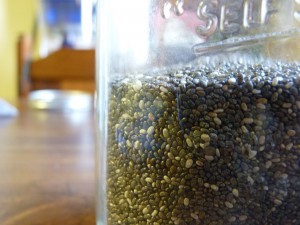 I will admit that I quickly became excited about chia seeds when they first entered my world. I did a bit of research after reading about them in Born To Run, and got excited about this newly discovered supposedly excellent source of Omega-3 fatty acids.

I ordered a big bag off Amazon.com and started incorporating some into smoothies and otherwise eating them by the spoonful. Recommending them to family and friends, I was a major chia fan to say the very least.

If you have never heard of chia seeds, here is a quick rundown:

A one ounce serving contains approximately:

The organic chia seed has been around for so many years now, and they were actually utilized by the Mayan tribes as well as the Indian Culture. They make use of the seeds to give them unbelievable source of energy. The Aztecs also took advantage of this wonder seed because of the natural makeup it contains. Not only that they are a good source of nutrition, they can also help in preventing dehydration.

It is because it can absorb for about 12 time its weight in water. Currently, these seeds are becoming popular again because it usually has the same functions as the diet pills do, but they are way better. They do it all in a natural way and so far they have no side effects.

These stats are great for such an inexpensive food, but they don't form the complete picture. Much like flaxseeds, the Omega-3 fatty acids contained in chia seeds are in alpha-linolenic acid (ALA) form. Herein lies the problem. The main benefits of Omega-3 ALA consumption is to try and get our bodies to convert it into EPA/DHA fatty acids (the kind found in fish oil), but in most cases our bodies just don't seem to be efficient at making the conversion.

ALA bio-conversion to EPA is very limited and conversion to the even more important DHA is practically absent. I said "in most cases" because there has been some evidence of the conversion rate being higher in vegans and EPA conversion higher in chronically-ill African-Americans.

To put all this more simply: most of the Omega-3's we get from chia seeds get wasted.

Getting enough of the right (EPA/DHA) Omega-3 fatty acids is extremely important for overall good health - one of the most important dietary things you can do in my opinion. In order to reduce chronic inflammation, we should try to get closer to a 1:1 ratio of Omega-6 to Omega-3 fatty acids. This is vitally important. Most of us get far too much Omega-6 fatty acids, with the typical American's ratio more around 30:1.

What Does All This Mean For You?

Most people should be supplementing with Omega's 3's to get the O6 to O3 ratio closer to 1:1. And as long as your not vegetarian/vegan, you probably should be taking fish-oil instead of relying on chia seeds. Chia seeds (or flax seeds) just can't give you the proper Omega-3 benefits.

That being said, I'm going to recommend you still eat them, but for different reasons than you've previously heard. Chia seeds are mainly a good food option for their high content of soluble fiber and antioxidants as well as their hydrating properties (when prepared as a gel). So yeahâ€¦don't give up on them just yet!