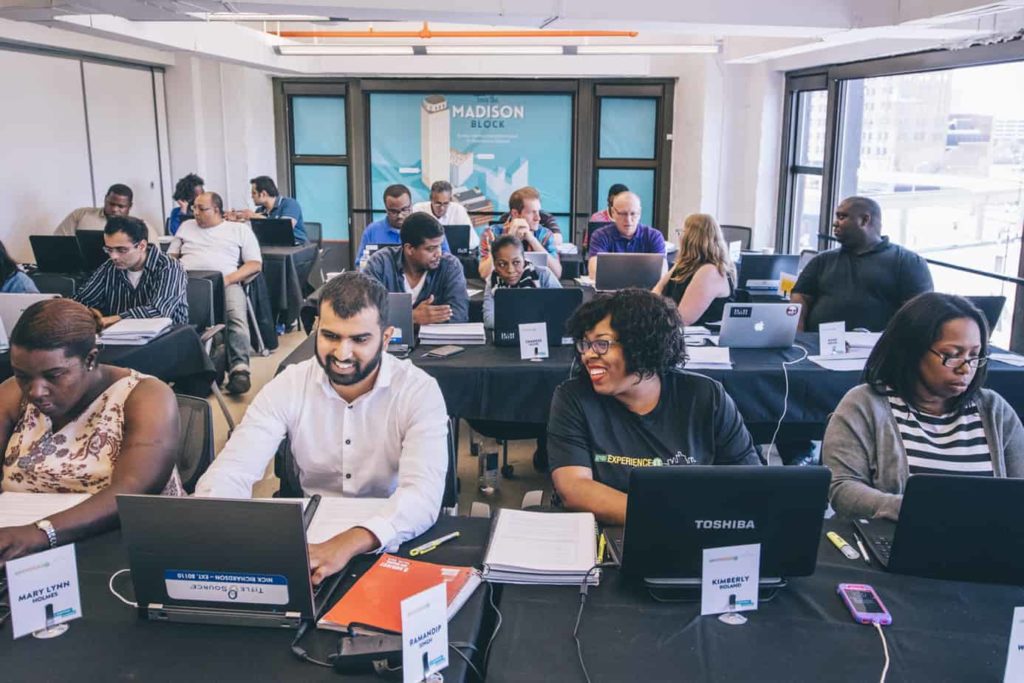 A coding bootcamp is a software development program which proposes to tach various programming strategies in s short period of time. Such programs can be either online or offline, mostly part-time, depending on the student’s preferences. The first boocamps emerged in early 2011, but the popularity of such education programs started to take winds in the recent years, with the US leading the market. In the EU, bootcamps appeared in early 2014 and the popularity is growing.

The most well-known types of bootcamps are stack-development bootcamps (coding bootcamps) and data science bootcamps. In order to attend any of the 2 types of bootcamps, minimum skills are required and participants usually undergo quick pre-tests in order t prove their coding abilities, analytical thinking, and/or scientifical approach towards given topics.

The need for experienced web developers is expected to grow 15% through 2026, faster than nearly any other professional sector. On top of that, research shows that salaries in this field increased faster in the last three years than over the previous decade.  With this unparalleled growth both in job opportunities and salaries, it’s no wonder that coding bootcamps have emerged as a way to train a new generation of web developers, a shift that could not have happened sooner. A direct response to the slow process taken by traditional computer science degrees to produce developers, coding bootcamps represent a disruptive educational force making college degrees less and less necessary.

One extremely obvious place where coding bootcamps have developed drastic improvements over traditional four-year degrees is in the amount of time and money needed to complete the programs. The cost of college is only going up, and these days yearly tuition for a traditional college degree can be at least $30,000, and that doesn’t include room, board, textbooks and other necessary items. When you factor in those additional fees, you’re looking at an incremental $10,000 per year. In total, the full cost of a college degree can be upwards of $160,000.

Compare this to a coding bootcamp. In just six months, students can complete a full-stack bootcamp that gives them the basic skills they need for an entry-level role. Even more remarkable is that hybrid community bootcamps, which blend online and offline learning via a lower-cost model, mean that students can stay in their local cities and towns. The considerably shorter time period coupled with the lower-cost approach to education means that coding bootcamps is substantially less expensive. Depending on the program, the full cost can be as little as $2,500.

Certainly, the cost difference is incredible. However, the payoff needs to be strong too to make any type of education investment worthwhile. Published income data shows that it is! Findings from coding bootcamp experts Switch Up show that on average, coding bootcamp graduates’ salaries increase nearly $20,000 within their first year of completing their programs. Naturally, salaries go up from there as graduates continue to pick up new skills on the job.

On top of this, research from job hiring experts Indeed showed that small and mid-sized companies have a preference for hiring bootcamp graduates over individuals with computer science degrees. With their experience problem solving on teams, previous work experience, and up-to-date coding skills, bootcamp graduates are found to be better equipped at ramping up at these companies than college grads. Further, Switch Up also published data that while 30% of bootcamp graduates don’t have college degrees, 70% found tech-related jobs after their bootcamp. What this means is that computer science degrees are not necessary to become a developer. Coding bootcamps can get the job done well, all while offering strong financial returns.

As great as coding bootcamps might appear, one place where they admittedly aren’t as strong compared to computer science programs is in the area of computer science theory. Coding bootcamps’ accelerated learning process puts a strong emphasis on hard skills needed for a job on day one. In contrast, the four-year nature of computer science programs means students take several courses on theory and foundational concepts. For someone looking to understand broader ideas and solve more challenging, complex problems, this is truly valuable. However, since most employers aren’t looking for these abilities, let alone from an entry-level role, they aren’t necessarily skills employers find lacking.