As one of the world’s largest developers, Emaar Properties has perfectly embodied Dubai’s pioneering spirit, creating some of the city’s most iconic landmarks such as the Burj Khalifa and Dubai Mall. With over 60,000 properties sold since its inception, Emaar has been at the helm of building some of the largest, most recognizable residential communities in Dubai. Boasting a sterling reputation for delivering quality projects, read on to find out about the most sought-after new projects by Emaar.

Dubbed as the “future of living”, Dubai Creek Harbour is a visionary project situated in the historic Dubai Creek. With its impressive selection of finance, culture, community, learning and leisure components, the 6 km 2 development is set to push Dubai to the forefront as one of the world’s leading global hubs. Featuring villas, townhouses and apartment buildings, the residential development will be built in several phases over the course of a decade. Once it reaches completion, Dubai Creek Harbour is expected to be at par with other highly popular real estate areas in Dubai like Palm Jumeirah, Downtown Dubai and Dubai Marina. Apartments at Dubai Creek Harbour have enjoyed considerable investor response. The projects that have been launched so far are all situated in the development’s prime location which is known as the Island district. To name a few, these are Dubai Creek Residences, Creekside 18, Harbour Views, Creek Horizon, Address Harbour Point, and its newest beachfront community,
Creek Beach.

Inspired by the vibrant beach culture of Miami, Emaar Beachfront delivers the tropical pleasures of a resort address amidst the exclusivity of a gated island residence. Thoughtfully designed to bring the convenience of urban living within a spectacular beachfront setting, the resort-style community will be comprised of 27 towers. Perfectly positioned on a pristine location, residents
have direct access to 750 metres of white-sand beach on either side of the development. Apartments at Emaar Beachfront feature luxurious interiors and floor-to-ceiling windows that frame scenic vistas of the Arabian Sea, The Palm Jumeirah, Dubai Marina and the Dubai skyline. The master-planned community also has an extensive selection of retail, dining and leisure attractions. Indulge in a variety of enjoyable experiences with luxury hotels, a waterfront shopping mall, and an enthralling marina that is poised to become the largest of its kind in the Middle East. Ideally located, Dubai Marina, the Palm Jumeirah and JBR are all accessible in mere minutes. Well-connected to major thoroughfares, key destinations within the city are also a short drive from Emaar Beachfront.

As one of the most sought-after addresses by Emaar, apartments at Beach Vista, the project’s first community, are now completely sold out. Recent launches such as Sunrise Bay and Marina Vista are also expected to generate considerable market interest. 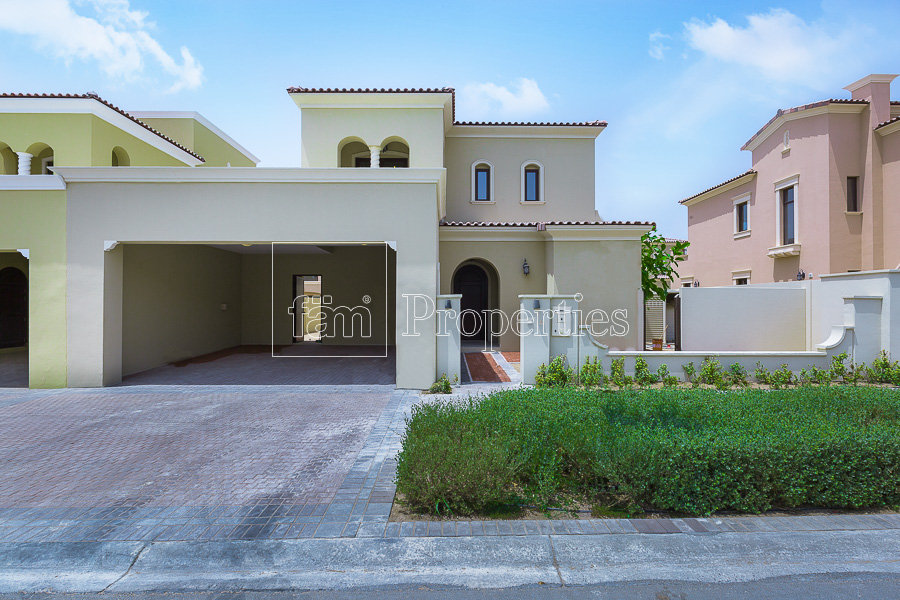 Home to exceptional villa communities, Arabian Ranches is one of Dubai’s premier residential developments. With 4,000 units ranging from luxury golf and polo homes to Mediterranean-inspired havens, villas at Arabian Ranches can cater to every preference, lifestyle and budget.
The abundance of amenities and leisure spaces like the Arabian Ranches Golf Club and the Dubai Polo &amp; Equestrian Club, make for an engaging community where residents can indulge in relaxing experiences that surely enhance every lifestyle.
Considered a prime location for family homes in Dubai, Arabian Ranches has recently been identified as the top area to buy villas with robust sales recorded in the first quarter of 2018.
A sizeable segment of the market has also sought villas for rent at Arabian Ranches. In response to steady market demand, expansions are still underway with the launch of new projects and several other phases in existing neighbourhoods.

Downtown Dubai
Spanning 500 acres, Downtown Dubai is Emaar’s flagship development located at the heart of the city. A tourism and entertainment hub, the site houses one of the world’s largest shopping malls and the world’s tallest building, Burj Khalifa. Downtown Dubai has traditionally been a real estate investment hotspot. For many years it has been a top pick for both off-plan and ready property and this trend has continued well into 2018. As one of Dubai’s prime real estate areas, apartments in Downtown Dubai are also one of the most expensive to buy and rent.
Emaar’s launches in Downtown Dubai have elicited some of the most impressive responses from the market with some projects completely sold out in a matter of minutes. Several off plan projects by Emaar in Downtown Dubai are currently in the pipeline including Burj Vista, Vida Residence, Downtown Views, BLVD Heights and BLVD Crescent to name a few.

Dubai Marina
Setting the global standard for similar developments, Dubai Marina is the largest waterfront development in the region occupying 50 million square feet of the prime real estate. Home to several high-rise luxury apartments and villas, it is divided into ten districts and each area offers a distinctive residential experience. A popular choice among the sophisticated and stylish set, this premier waterfront community boasts of excellent infrastructure as well as an impressive selection of cosmopolitan restaurants, entertainment attractions, retail offerings at Dubai Marina Mall and premium hospitality venues including the famed 5-star hotel, The Address at Dubai Marina.

As of 2018, apartments at Dubai Marina are still highly popular among overseas and local buyers. In fact, it was named the most in-demand area by the Land Department for the first half of 2018 amassing about AED 2.9 billion in sales transactions. Emaar’s newest and most highly-anticipated projects in the area include 52|42 and Vida Residences at Dubai Marina.

Raniyah is author at LeraBlog. The author's views are entirely their own and may not reflect the views and opinions of LeraBlog staff.