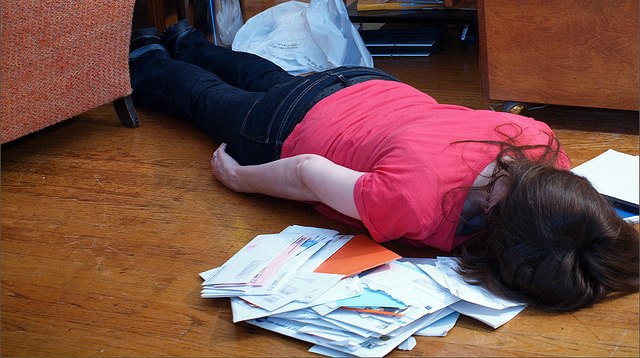 Talk to the average Boomer long enough and they’ll let you know how Millenials — those slackers who make up Generation Y — pose a great threat to the economy.

According to them, Millennials are lazy and self-satisfied people whose upbringing consisted of overprotective parents and participation awards. Overlooking the fact it was the Boomers who handed out these awards in the first place, their pasts have molded them into special snowflakes unwilling to commit to hard work.

They post pics of their latest brunch while they nurture a dangerously low bank balance but it’s all right. Since they’re still living with their parents, they don’t need to start thinking about savings or investing in property.

They’ve ruined the diamond industry, the paper napkin industry, and they’re setting their sights on the next corrupt and/or wasteful industry near you.

They should be, as a generation, very bad at handling their finances, but as a growing number of financial studies report, Millennials may not deserve this reputation. In fact, they may just set a financial example Boomers and other generations should follow.

The Public Versus Private Face of Millennials

If we read nothing more than Buzzfeed quizzes and click-bait articles, it would be easy to fall into the tailspin of Boomer logic. The Internet has painted anyone ages 18–34 years old as incompetent. Once you dig a little deeper, however, you’ll start to see this public façade doesn’t hold up to scrutiny.

Despite every listicle that says otherwise, TD Bank’s most recent Consumer Spending Index Survey profiles the snowflake generation as being responsible with their money. The study revealed those individuals ages 18–34 actually spend less money than the average American despite eating out more often.

This is backed by the result of the Nielsen Company survey. Despite indulging in impulse purchases more often than any other generation, two-thirds of Millennials mitigate the cost of their splurges by spending when special deals and discounts could save them cash.

A half-priced latte fails to hold the same sinister sway its full price counterpart has over personal finances, but extreme couponing isn’t enough to explain this generation’s surprising maturity regarding their finances.

Contrary to popular belief, their edge over other generations could be that they’re goal oriented, with over half of Millennials viewing debt as their most pressing financial concern. It’s with this in mind they start tackling targets of debt and retirement almost a decade earlier compared to most Boomers.

They do this by keeping to a budget. Nearly 80% of these snowflakes use a household budget, compared to just 61% of Boomers, and they aren’t shy about loading up their smartphone with money management apps to help them stick to it.

Why They Have a Bad Rap: Age Gaps, Student Loans, and the Recession

The gap between the youngest and oldest Millennials is more of a chasm. Those who make up the tail end of the generation were born in 1999, and they’re just entering the workforce and adulthood. In fact, at just 18, they can’t even vote. Much of the financial common sense older people take for granted are still lessons to be learned by these individuals.

Meanwhile, way on the other side of this crater, we find those who started it all. Born in 1983, they’re 34, and they’re thinking about developing their careers, starting families, and investing in property — not what you would call priorities for the average freshman.

When the experiences of the generation differ drastically like this, the idea of creating an average that’s representative of the typical Millennial is doomed from the start. There may very well be younger Millennials who think nothing of frequenting Starbucks too many times a week, but for everyone extravagant Millennial, there’s another who is diversifying investments and contributing to a retirement plan.

Fiscal responsibility is no mean feat as a Millennial. In some ways, this generation was set up for failure. They have the highest student loan debt out of any generation, with over a third of these individuals owing more than $30,000. Meanwhile, the older Millennials entered the workforce during the Great Recession. As they settled for underemployment in positions where their degrees went unused, they weren’t making as much as other generations straight out of school.

Many people think their experiences seeing the housing markets crash as they came of age skewed their priorities. Millennials are putting off investing in life’s big investments (like vehicles and houses) longer than other generations, and they view many conventional financial organizations with suspicion.

Perhaps this could account for the Millennial’s lion’s share of payday loans. They’re twice as likely as Boomers to get such a loan from a direct lender. Why? Direct lenders like MoneyKey offer an alternative to traditional banking sources, and they do so with loans that appeals to Millennial’s value of convenience. Many of them, MoneyKey included, conduct most of their business online to make it accessible by any mobile device. Rather than waiting for the bank to open, they can get online payday loans any time they get the time to check in with their iPhone.

Unsecured cash advances may be their preferred method of borrowing, but direct lenders don’t put them at any more risk than any other generation. In fact, considering the frugal spending habits outlined by TD and Nielsen surveys, they’re better equipped to take on these short term loans than any other age group.

It may take a while for popular culture to catch on to this generation’s economical ways. Since they’re not plugged into Social Media, Boomers may take even longer to clue in. But their financial gains will be hard to ignore once it’s revealed Millennials are better prepared for retirement than their predecessors. At the very least, the up and coming Generation Z will take the heat off the Me Generation soon enough. Until then, those ages 18–34 will sleep well knowing the state of their finances are a lot better than the media depicts.