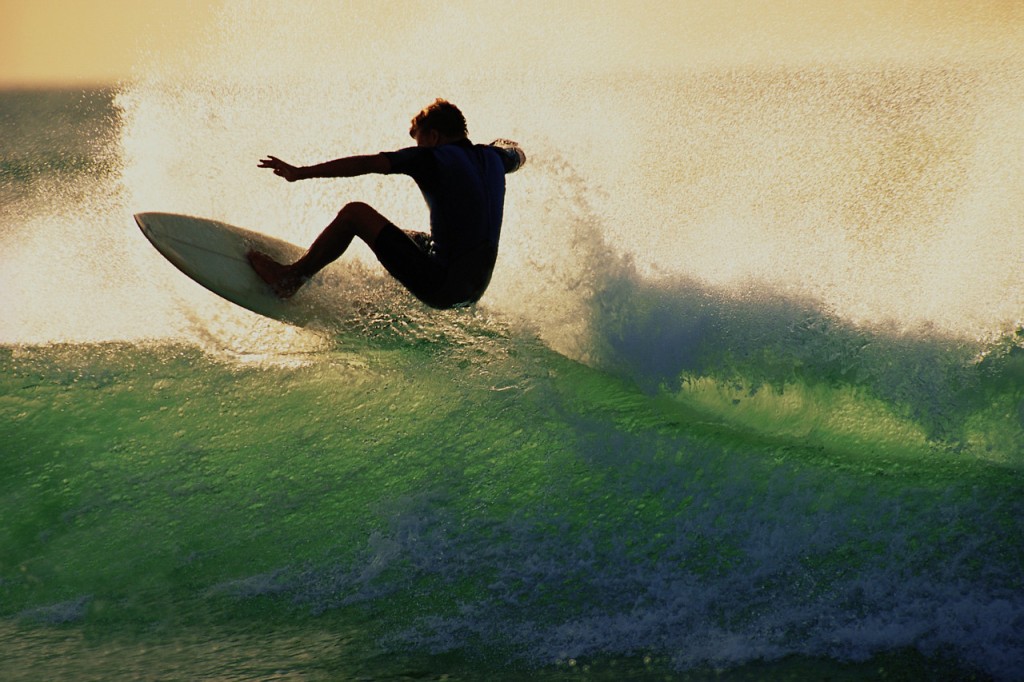 Do you know who Kelly Slater or Bethany Hamilton or Andy Irons are? Why they live for? What they do?

One thing that is common in all of these three people is Surfing. You must be wondering why I am writing this article, it's just because of my keen interest towards surfing I want my knowledge to spread over the internet. Let's talk about surfing, as we know it is mainly a surface water sport in which the rider of the wave is called as a surfer. In surfing the surfers use surf board or sometimes without a board ride on the advance or deep face of a progressing wave, towards the seashore. These surfers are largely found in the deep-sea, but surfing is also being done in lakes or in rivers. On the other hand, few surfers make the most use of waves which are made from cruiser wakes or somewhere in artificial wave pools whilst learning how to surf of just for fun when they can't go outside and surf. So it can be done outdoors as well as in indoors too.

The present day explanation of surfing is mainly referred to a surfer riding any wave ducking, sitting or standing up on a surfboard. Standing up on a board may be known as paddle boarding too, while the other famous form of surfing is body boarding, in which a surfer has to lie on their belly or on knees, whilst riding the waves. Rest are foils, surf matting, knee boarding etc. Among all of these preferred styles of surfing, the purest form of surfing is Body surfing, in which the wave is surfed without using any board but the surfer’s own body and just to be safe while surfing many workouts and fitness exercises are also important, to get away on a high wave without being injured these are meant to be done on the daily basis. There are websites which provides these training and workouts online. Important workouts are discussed at the end. Talking again about standing-up surfing again,

There are further 3 major subdivisions in it:

Further these 3 have several other major differences, with the board length and design, its riding style, and depending on the kind of wave that is ridden.

Kelly Slater – Robert Kelly Slater was born on February 11, 1972, Cocoa Beach, Florida, US. Kelly is a professional surfer from American. He has been awarded with a record 11 times World Tour Champion by Association of Surfing Professionals, counting 5 successive titles from 1994 to 1998. He is the youngest and the oldest to achieve the title at the age of 20 and 39. Kelly has become a fundraiser and spokesperson for "suicide prevention" awareness and he also has surfed in celebrity events for Surfers against Suicide, influential sports website ‘Athletes Talk’. He said "People get in this dark place and they don't know what to do so it's always nice to see a non-profit that isn’t turning into anything else other than just trying to help people."

Bethany Hamilton – Bethany Meilani Hamilton was born February 8, 1990; Lihue, Hawaii is also an American professional surfer. She survived a shark attack losing her left arm, and overcome the injury to eventually revisit as a professional surfer. An autobiography Soul Surfer: A True Story of Faith, Family was then written by her about her experience in the 2004, he also wrote his fight to Get Back on the Board. Later in April 2011, based on her book and additional interviews the film Soul Surfer was released. She also has appeared on many television shows, and will portray herself in the 2014 movie Dolphin Tale 2. Recently she announced that “I'm excited to announce that I got married to an amazing man, Adam Dirks, on Sunday, August 18th, 2013!”

Andy Irons – Philip Andrew Irons born on July 24, 1978 and lived till November 2, 2010. He was an American professional surfer as well. He learned to surf on the treacherous and thin reefs of the North shoreline in Kauai, Hawaii. In his professional career, he won

Also he won 20 elite tour victories including four times Vans Triple Crown of Surfing, from 2002 to 2006.

These surfers and many more surfers like these are inspiring people to surf by their acts and hard work. They admit that it was never possible for them to do it without the determination and their training. To be a surfer like them a proper training and fitness regarding surfing is a must. Fitness includes many workouts starting from:

The stories of these surfers are inspiring and gives a confidence in other people to do surfing and if anything is being done without proper training and a maintained schedule, is vain!