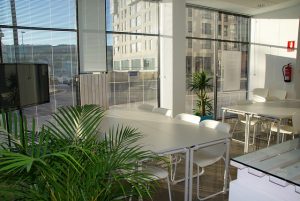 Coworking spaces are all about using workspaces to facilitate more productivity and collaboration between independent professionals working side-by-side or creatively beating their own path.

These kinds of collaborative work environments are known to attract self-employed people of all stripes—entrepreneurs, freelancers, artists, and all kinds of temporary workers.

If you’re not familiar with the concept of coworking spaces, it can be difficult to initially wrap your mind around. Think of a coworking space as offering all of the amenities of the workplace—the opportunity to bounce ideas around, networking opportunities, and physical amenities like boardrooms and on-site cafes—with a little extra to sweeten the deal like higher workplace morale and more genuine idea synergy.

A lot of researchers have taken a hard look at coworking spaces and tried to determine why they consistently outperform traditional workplace environments in terms of productivity and morale.

It turns out that membership-based coworking spaces led to significantly higher levels of independent workers thriving in the workspace mostly because each of those workers wanted to be there in the first place, which is certainly not a given for millions of workers.

Studies also show that workers tend to thrive more in coworking spaces because they’re working on projects that they hand-selected and care passionately about. This happens to create a virtuous cycle in which creating a job that’s initially appealing leads independent workers to find richer joys as the project moves along from the brainstorming stage to completion.

Independent workers, entrepreneurs, and freelancers also like that in coworking spaces they don’t have to “put on airs” or play the social-climbing corporate game.

Everyone in a coworking space is working on their own projects, although there are ample opportunities for collaboration, networking, and synergistic effects. Remember, coworking spaces have all of the amenities of regular workplaces, such as on-site meeting rooms and cafes, so that if workers need to work side-by-side they can.

Freelancers going about their jobs in a coworking space also find that collaborating with others comes a bit more naturally. Why? Because they’re not worrying about someone else stealing their ideas and taking credit to impress the boss and advance.

Another reason is that independent workers are often working within totally different fields, which makes teamwork and networking non-competitive yet potentially really interesting from a creativity perspective.

Imagine a filmmaker, freelance photographer, and screenwriter sharing their interests over a coworking spaces’ cafe…coworking spaces bring together passionate independent workers who most likely want to help each other succeed!

The other nice thing about coworking spaces is that it gives workers much more control over their schedules, pay scales, and even the kinds of work that they accept from clients.

Since coworking spaces are membership-based, open 24/7, and come with other amenities like security, parking, and reservable meeting rooms, there’s no reason why workers can’t burn the midnight oil when inspiration strikes or decide to take the day off when relatives make a surprise visit.

Coworking spaces seem to have struck that happy medium between encouraging too little structure and too many workplace rules. In other words, when you’re given total latitude on where to work and how much you should work in a given week, the tendency is to slack off or subscribe to a work schedule that’s functional some weeks and disastrous on others.

Too much workplace structure tends to sap the fun out of it or stifle creativity. Coworking spaces seem to encourage just enough structure to facilitate productivity, creativity, and ultimately professional fulfillment.

Franchise opportunities in the coworking industry are only increasing as the need for these kinds of workspaces goes up. The U.S. Bureau of Labor Statistics say that by 2020 over 40% of the American workforce, or more than 60 million people, will be some kind of independent worker.

That could be an entrepreneur, a freelancer, a contractor, or a temp but the point is that these workers are increasingly going to need a convenient, secure, and comfortable coworking space to collaborate and learn with each other. Much of tomorrow’s work will be job-based rather than salary-based.

Independent workers also like the extra degree of flexibility, control, and freedom that comes with independent work. Now, coworking spaces are the future of business and a hugely promising franchise opportunity because they’re membership-based with relatively low overhead and an ideal chance to get in on the next big revolution in workplace culture.

BrianMase is author at LeraBlog. The author's views are entirely their own and may not reflect the views and opinions of LeraBlog staff.