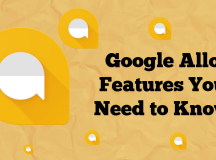 Google Allo is Google’s smart and instant messaging app developed for iOS mobile operating systems and Android. For Android users it has an available web client on Google Chrome. Google Allo was announced in May 2016 at Google’s developer conference but it was released in September 2016. In the app […]