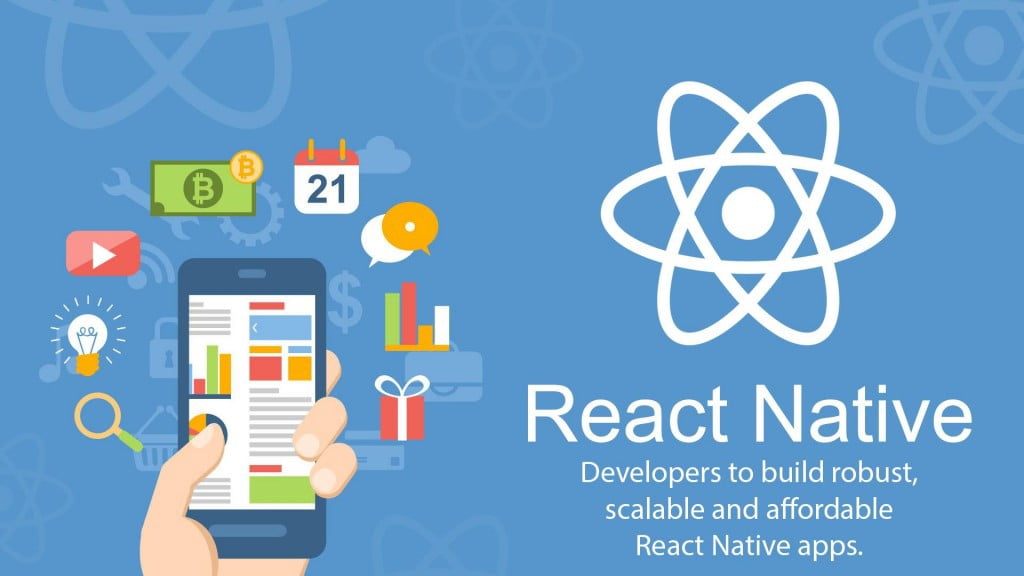 Across the world, 10.5% of respondents from the developers’ community uses React native framework for the web and mobile app development.

The app development deploying React Native works well for Android as well as iOS; this further reduces the tenure of development. Along with the readymade components, numerous React Native tools help in building new components to fasten the development process.

The Visual Studio Code is a powerful source code editor written in TypeScript and JavaScript. Since it is open-source, lightweight, and free to use, it is the choice of every React native development company. It supports Node.js, TypeScript, and JavaScript. VSC also has app development tools like IntelliSense code completion and debugging.

Flow is also an open-source and free-to-use React native programming tool that gives services like real-time feedback, JavaScript customization, and ease and integration. The tool allows static typing as the primary feature.

Nuclide comes as a unified package of functionalities that supports Atom to offer an environment to play with the projects of React Native, Flow, or Hack. It offers numerous services like built-in debugging, task runner, hack development, JavaScript development and so on.

A toolchain employed by the React Native developers offers plenty of features like documentation, access to community forums and Slack community, etc. It opens the gateway of the Native components like Expo SDK library, native APIs, Accelerometer, native graphics, file systems, etc. Expo helps you maintaining the product parity on Android as well as iOS platforms.

Redux is the popular state management tools meant for JavaScript applications. The features of live code editing and time-traveling debugging are the primary reasons behind its popularity among the developer’s community. The primary idea of employing a Redux is that the complete state of an application is put away in one central location. Whenever you require a component, you can directly access it shares it with other child components with the help of callback functions. It helps you simplify the complex sections of your application.

Atom is a hackable text editor which is known for its trouble-free approach as a code editor. It also enables the addition of open-source packages to add novel features to improve the functionality of your application. Additionally, it enables services like cross-platform editing, built-in package manager, multiple file navigation over a single window, and customizable theme based designing.

It is a tool that helps in tracking the patterns of JavaScript as well as ECMA codes. It is similar to JSLint and JSHint. ESLint deploys Espree to parse Javascript. It also uses an AST to evaluate different coding patterns. Also, ESLint can be plugged or unplugged as per requirements. Since every rule is in plugin format, there is an easy to add or remove them in the runtime.

The trouble-free navigation in the app as well as on the web is important to let the customers stick. The contextual navigation helps your users understand the offerings of your site and help them navigate to those sections that they like to explore. React navigation is a popular tool that helps React Native developers in managing and adding navigational routes in native applications. It is a JavaScript-based tool that supports a wide range of platforms for app development.

It is a free-to-use open-source toolchain CLI provided with boilerplates, plugins, and a lot more. It enables easy access to numerous boilerplates to support plugins. It enables the services for the app testing, customization in themes, selection of components, and distinct usage examples.

It is one of the finest and quick prototype designing tools for UI/UX development of the web as well as mobile apps. Though it’s not free to use and available only with the paid version, it’s totally worth investing. If you own a React native development company, you must opt for Adobe XD to offer the best designing services to your clients and boosts the efficiency of your app designing team.

These are some of the React Native tools that can fasten the process of project development. But these aren’t the only ones. You can look for some other paid and unpaid tools to improve the efficiency of your team at different stages of mobile app development.

wedowebapps is author at LeraBlog. The author's views are entirely their own and may not reflect the views and opinions of LeraBlog staff.