While the front-end constitutes the visual part of an app, the back-end is responsible for the app’s functioning. And, a back-end/ server-side framework is a library containing tools and modules that create the architecture of a website or an application. Unlike front-end development that involves creating/implementing the client-side of an app like UI/UX design, the layout of the app, etc.; back-end development takes care of the server-side requirements – the creation of back-end functionalities, the implementation of database systems, and communication between various web services. 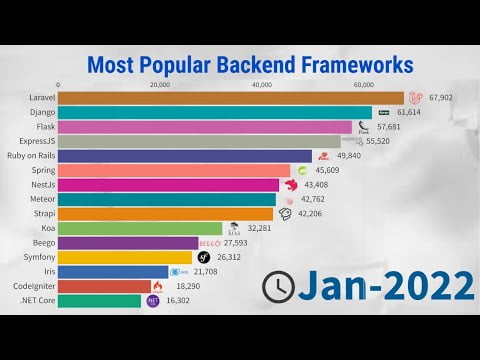 A research report published in January 2022, by YouTube’s analysis and data visualization project “Statistics & Data” enlists the top backend frameworks based on their popularity amongst users. The frameworks have been ranked as per the number of repository stars earned from users.

This open-source PHP web framework is employed for building Symphony-based web applications. It comes with a modular packaging system having a dedicated dependency manager. Laravel possesses an MIT license and has hosted its source code on GitHub.

Laravel promises high app security with the use of:

Laravel comes with a simple configuration which eases out:

Laravel provides support for popular cache back-ends including Memcached and Redis. Moreover, a file cache driver is employed for executing the process of cached object storage within a file system. Furthermore, Laravel users are empowered to configure several cache configurations.

Flask is a Python-based backend framework used by brands like LinkedIn and Pinterest. It is a versatile framework that is suitable for developing small-scale as well as large-scale backend development projects. It is considered to be a micro web framework as it doesn’t need any tool or library for development. Besides, it does not have any components like form validation, database abstraction layer, etc. where the already present third-party libraries offer common functions. Nevertheless, this framework does support extensions for adding app features and other utilities, but these extensions have to be implemented in Flask itself. The extensions include certain framework-related tools, various open authentication technologies, form validation, object-relational mappers, etc.

Also called Express, Express.js is a Node.js web app development backend framework. It is open-source and licensed under MIT. This standard Node.js server framework is employed for creating web apps and APIs.

An easy learning curve for developers

Ruby on Rails is written in Ruby and licensed under MIT. This framework is fifteen years old and is employed for architecting eCommerce apps, stock exchange platforms, social networking websites, and informational portals. Several big brands like Airbnb, Hulu, GitHub, and Goodreads have reaped the benefits of RoR.

Spring is an open-source Java-based backend framework designed by Pivotal Software, Inc. It was crafted for simplifying the tasks on microservices and can be utilized for standalone Java apps as well as traditional WAR apps.

TysonWinward is author at LeraBlog. The author's views are entirely their own and may not reflect the views and opinions of LeraBlog staff.