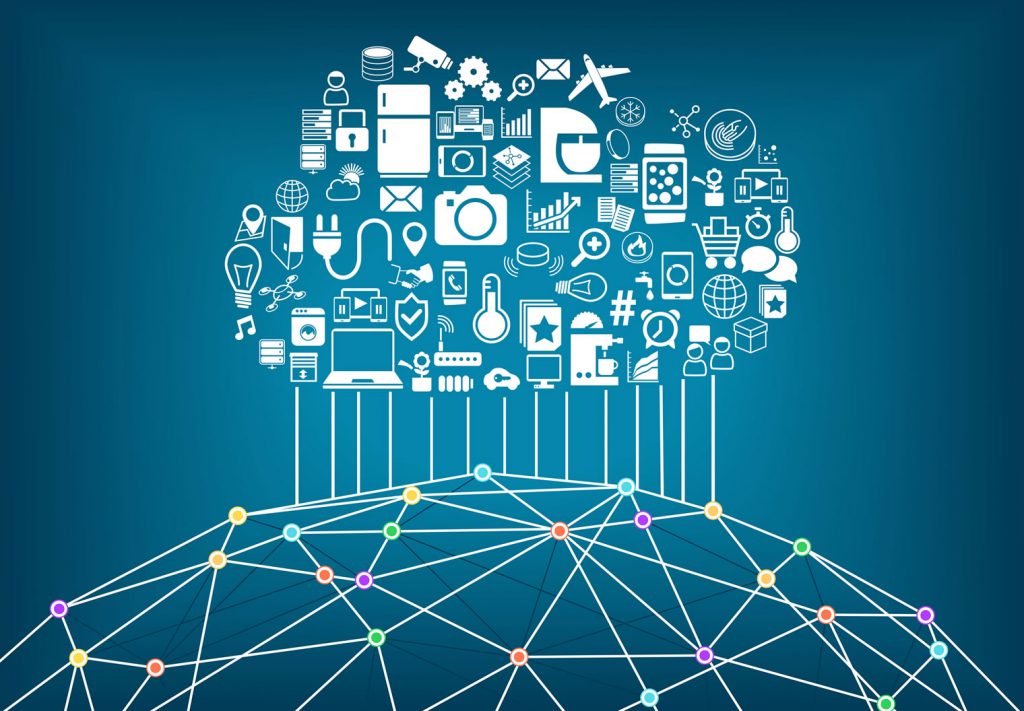 Internet of Things is a vast ecosystem of linked physical objects which can only be accessed via the internet. It is a massive collaborated network of connected not only items but also individuals. Every object and individual using IoT amass and then share the data linked to the way they are using it, and also, the environment surrounding them. All the objects have inbuilt sensors, and they are linked to a single Internet of Things platform. This platform further integrates data from a wide variety of devices. The data collected is further analyzed to share the most valued information along with the apps which are built to address particular requirements. All the strong IoT platforms can identify precisely what information is required and what not.

When it comes to the Blockchain technology, it is similar to the functioning of the internet, as it also contains built-in strength. Blocks of information are stored which are identical across the network, Blockchain. And, it cannot be regulated by a sole single entity. Basically, Blockchain network abodes in a state of harmony, one which automatically checks itself, and it is regarded as a perfect self-auditing ecosystem.

How are IoT and Blockchain connected?

Blockchain and Internet Of Things (IoT), two of the most fascinating terms in the world of technology at the moment can be connected more seamlessly. Internet of Things basically contains the world of sensors, the moving objects including the vehicles and any device which has embedded electronics, and is used to communicate with the world. This is basically done over an IP protocol.

Now, when it comes to blending IoT with Blockchain, which is basically just a distributed ledger architecture pattern, the combination becomes more powerful. With this efficient combination, the complete lifecycle of Internet of Things objects and apps can act as a binding factor for business processes to act on the events. A private Blockchain for a driverless vehicle which will enable safe and real-time connections from the vehicle, starting with starting up, authenticating to track safety. Blockchain technology is basically touted as a technology which is aimed to improve the IoT ecosystem. They also make the IoT cost-effective.

IoT and Blockchain can work in sync!

Almost 20 billion connected devices are online. Therefore, IoT is surely going to play a significant role in the economy. Internet of Things linked expenditure will touch the $1 trillion mark by the years, 2020. This clearly depicts the increasing band of companies like healthcare, agriculture, logistics, transportation etc. However, behind these huge numbers, there are various things which are hidden as well, like intricacy of the technology, security issues, the standard protocols etc. All these have hampered the extensive adoption across several different domains. Here, comes the role of Blockchain technology. It promises to take into consideration a plenty of problems.

There have been doubts linked to the security aspect of Internet of Things, especially related to the reliance on the old centralized technology solutions. Blockchain is now coming out to be as a missing link which will be apt to settle privacy and reliability issues with the Internet of Things. Further, this technology can even be utilized to trace the billions of connected devices, allowing the processing of both the transactions and harmonization between various set of devices. This further paves the way for important savings for Internet of Things industry experts. This type of decentralized motive will eradicate the risk of single points of failure. Therefore, it is touted to develop a more powerful ecosystem for devices to function. Also, most importantly, the cryptographic algorithms which are being used by the Blockchains can easily make consumer data a lot more private.

IoT and Blockchain can be connected in various ways. And, the power of both these technologies doubles up once they get connected. Therefore, we will surely see them connecting a lot more.

James Warner is author at LeraBlog. The author's views are entirely their own and may not reflect the views and opinions of LeraBlog staff.