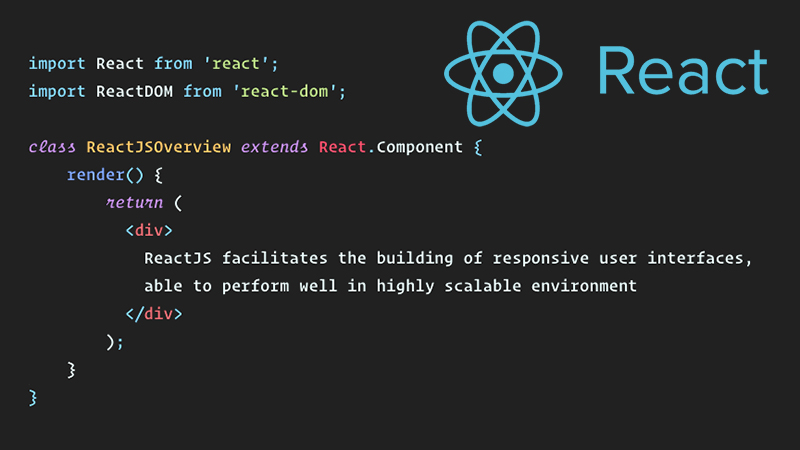 Invented by Jordan Walke at Facebook, React.js is, undoubtedly, the most popular library out there. Reusable React.js components increase the quality and speed of development. It also optimizes web development efforts significantly. With the help of this library, React.js developers foster a comfortable user experience and help in creating highly dynamic mobile and web applications.

Let us know about more advantages that React.js offers:

Careful consideration is required by those applications that host a lot of data updates and user interaction about how the application structure is going to affect the performance. It is quite slow to change or update the Document Object Model (DOM). A server keeps an eye on the difference caused by the changes constantly to provide the required response. Then, in order to respond properly, it requires to update the DOM trees of the entire document which is not valid ergonomically. Nowadays, DOM trees consist of numerous elements. This problem is resolved by using the virtual DOM.

React Native is one of the most efficient environments for developing mobile apps. Its working principles are similar to the principles of React.js, except for the fact that it does not manipulate the DOM via virtual DOM, but a few native views. React Native does not depend on HTML5; everything is written in JS and rests on native SDKs.

React Native highlights the chief advantages of React.js and React.js makes it easy to develop mobile applications with React components. This allows developers to use native APIs and take it towards performance benefits.

React.js developers can work much faster and in an efficient manner due to the ubiquity of JavaScript code. Developers can just refresh the viewing page instead of reloading the developed application after every update to witness the changes.

UI libraries keep a track on the changes happening in the data model and also update the corresponding part of the DOM when these changes take place, or tracks changes in the DOM and accordingly update the data model. This process is known as two-way data binding and can make it complicated to work with UIs.

React.js uses one-way data binding. This process guarantees that changes of child components do not have any effect on their parents. For instance, in a React UI, each time you type in text in an input field, it does not affect the status of that component. Instead of that, it updates the data model which triggers the UI updates. This brings stability to the code. It also makes it easier to debug self-contained application components.

Each React.js component controls its own rendering, has its own logic, and can be used again wherever required. This library’s ability to amplify small components and build custom components provides great flexibility required for a project.

In particular, this approach works great with small and medium-level projects. Reusing code makes it simpler to create and maintain applications and to execute a persistent look and feel across the entire project. This function also means that the developers can simultaneously create a web and mobile application. All this results in the decrease in time and overall cost.

An open-source library with more than 1,000 contributors, React.js is developing non-stop. Major changes done to React.js undergo the Future of React repo, Issues and PR. This allows the community to share their thoughts and feedback on new features, JS syntax improvements, and experimental APIs.

JS community provides developers with the ability to quickly learn the language. In addition, this vast community makes sure that you find the apt React.js development company for your project.

Tech giants like Airbnb, Facebook, IMDb, DropBox, Instagram, PayPal, Netflix, Walmart, and Tesla Motors are a few users of React.js as it provides unmatched efficiency. Its trendy, dynamic, efficient, quick, and simple to use. As it boosts business growth and enhances customer satisfaction like no other framework, React.js is the framework to go for.