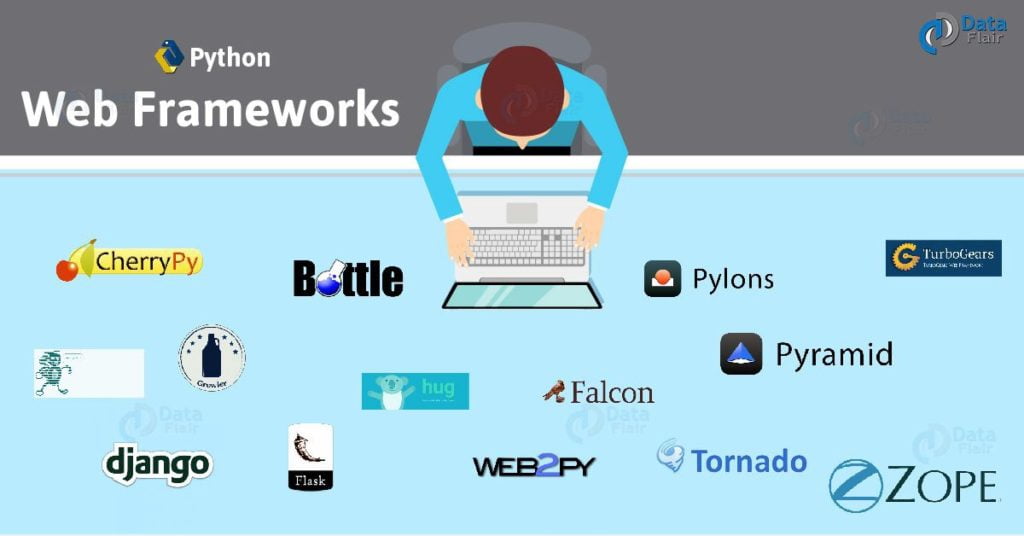 On the last years, Python’s popularity among developers has been growing steadily. According to GitHub, it stands now as the 3rd most used language, thanks to its ease of use for higher-level programming in machine learning and data analysis projects.

In fact, the search for developers skilled in this language has spiked since mid-2018, to the point that many companies are now considering Python development outsourcing to fill their gaps. That’s basically because the language boasts a unique syntax and it’s very readable.

So, anyone looking for an object-oriented programming language for higher programming can’t go wrong with Python. That’s especially true when considering the number of highly efficient Python frameworks out there that make things fairly easier when working with it. With these frameworks, developers can build robust apps over an existing structure, avoiding the need to start from scratch.

Of course, you need to know which framework can become your best ally. Here’s how you can do that.

How to choose the right Python framework

The first thing you should do is take a look at your project to define its size and complexity. Are you building a simple app or a large system? How many features will the project require? What’s the project final goal?

Also, you need to know that there are 2 different Python framework types that serve different purposes. You can find:

Apart from the kind of framework you are looking for, you also need to understand each framework’s limitations to check which one is best for you. Of course, you can always work your way around those limitations or use another alternative, given the various Python frameworks out there.

You should discuss these things with your IT team or with the Python development outsourcing company helping you with your project to find the option that best suits you. Additionally, you can read on to find out the specs of some of the most used Python frameworks today.

This microframework was developed to create APIs. It distributes in a single file, which means that it has no other dependencies to create small web apps besides the Python Standard Library. This limits its use for simple apps, especially those for personal use or prototypes.

Bottle has a built-in HTTP server, supports plugins for different databases, and allows access from cookies, data, file uploads, and other metadata.

Pasttle is an example of a simple web app built with Bottle, which is basically a pastebin clone.

One of the most popular Python frameworks out there, CherryPy is a microframework with which you can build web apps as a standalone Python application embedded with a multithreaded web server. It can create apps that run on any OS with Python support, which grants it higher versatility.

CherryPy has a flexible built-in plugin system, support for coverage, profiling and testing, and an interesting number of tools for authentication, caching, encoding, static content, and many more.

Monitoring tool Splunk Enterprise is one fine example of what you can achieve by using CherryPy.

This is a full-stack Python framework that follows the DRY (Don’t Repeat Yourself) principle to limit or avoid repetition of software patterns. Since it’s a full-stack framework, it has loads of built-in features and support for various databases (such as native support for MySQL, PostgreSQL, SQLite and Oracle Database).

That native support is the reason why Django is used for the creation of complex, database-driven websites. Additionally, it’s packed with libraries, an object-relational mapper (ORM), support for web servers, template engine, and authentication support.

Another popular microframework among Python development companies, Flask is very lightweight thanks to its modular design. This also allows for it to be very adaptable, which in turn makes it a great choice for creating solid foundations for web apps to use all kinds of extensions.

Compatible with Google App Engine, Flask has a built-in debugger and development server, support for any ORM and unit testing, HTTP request handling, and support for secure cookies for client-side sessions.

The website for sharing Linux and Dot files, DotShare.it, is a good example of what you can build with Flask.

This is an open-source framework and an asynchronous networking library at the same time. Tornado is great for building apps that require superior performance while also receiving thousands of users at the same time.

This is possible thanks to its use of a non-blocking network I/O that gives Tornado the possibility to scale tens of thousands of open connections. This is perfect for apps that need long-lived connections for each user, such as long polling and WebSockets. Additionally, Tornado offers real-time services and user authentication support.

The most widely-known app was FriendFeed, a real-time feed aggregator bought by Facebook that managed massive server loads for its real-time updates.

TurboGears is another full-stack framework that’s data-driven and open-source. It lets Python developers create data-driven apps in a quick manner. That’s because TurboGears comes equipped with a flexible ORM, intelligible templating, and components like Repoze and WebOb for apps that require database connectivity.

This framework is designed around the model-view-controller (MVC) architecture, which makes developing in Python easier and more maintainable. Besides, it also offers a minimal mode that lets it work as a microframework to work on projects that don’t require the whole stack.

An example that shows the power of TurboGears is Allura, a management suite to host software projects.

The final framework on this list is also open-source and comes with a web-based IDE including a code editor, debugger, and one-click deployment. Thus, Web2Py is the perfect choice for developers looking for a scalable full-stack framework for Python.

Web2Py lets you create dynamic web content and has a powerful ticketing system that generates a ticket whenever there’s an error. It also has data security features to protect you from vulnerabilities, it can read multiple protocols, and it is able to run on any web hosting with support for Python or Java and Python.

The number of applications for Web2Py is very impressive, as you can surely attest this with this example list found on GitHub.

There are more frameworks that Python web development companies use on a daily basis, but these are the most common ones. As you can see, there’s a wide range covered here, from microframeworks that help in the prototyping stages, to full-stack frameworks that power huge websites like Instagram. As Python use in sophisticated technologies keeps growing, so will these frameworks.

That’s why you need to work with them, be it with your own team or with an offshore Python development company. Because some of the best features of the future will be based on them and they’ll surely provide the solutions you seek.