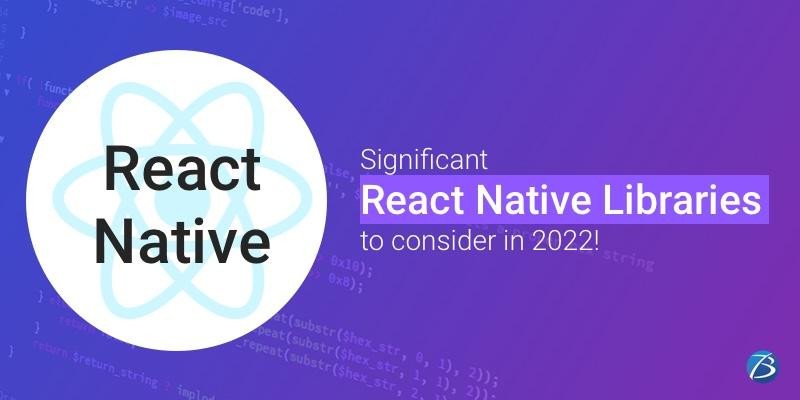 The React Native framework offers a wide range of tools and libraries that ease out the task of software developers and speed up the development process. These libraries contain innovative components that can be integrated into web/mobile apps to create amazing interfaces. Thanks to these ready-to-use libraries, React Native developers no longer need to create the code from scratch – they can adjust these readymade elements as per the requirements of their software development project.

One can find numerous useful React Native libraries on GitHub that are easily accessible. However, the availability of myriad options often confuses app development teams trying to pick the best-suited library, and so, it is important to be well versed with these libraries. This post provides glimpses of the top libraries you need to consider in 2022 as well as handy insights on their offerings and USPs. Check them out! 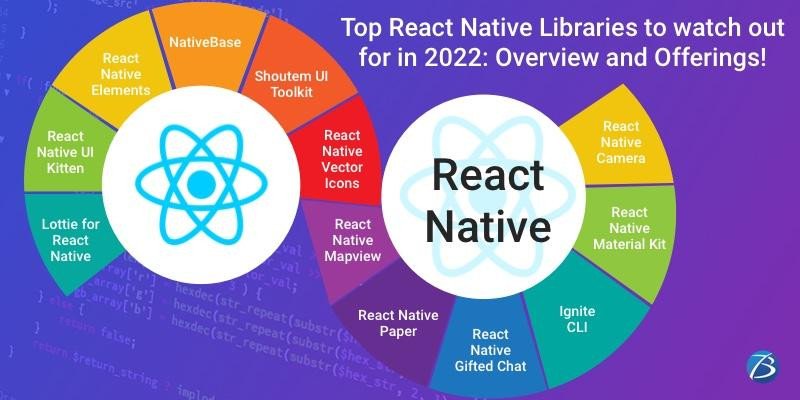 This library facilitates adding animations in React Native apps across several platforms – Android, iOS, Windows, and the Web. The Lottie component parses Adobe After Effects Animations that are exported in the JSON format, using Bodymovin and then, renders these animations on the mobile and the web. This way, the designers can build animations and ship them, without the need for engineers to take the effort of recreating animations by hand.

This React Native app development library is portable, offers a magnanimous collection of in-app animations, and can be accessed by the developers around the globe via open-source licensing. Using these animations you’ll be able to craft a captivating UI for your React Native applications. And, since the animation files are small-sized and come in vector format, the app’s performance is not impacted either.

This React Native UI library facilitates the development of alluring multi-brand mobile apps with cross-platform compatibility. React Native UI Kitten is based on Eva Design System and therefore, the designing as well as the app building process becomes consistent and scalable. It offers generic UI components and its themes can be altered during the run time, without having to reload the app.

This library allows app developers to integrate various open-source UI modules in a single place and utilize pre-built app development packages comprising several modules such as search bar, divider, etc. It provides the developers complete control over the app design and empowers them to model the app components as per the requirements. React Native Elements will save the time and efforts of your development team as there is no need for rewriting the same code. This leads to the development of a distinct app within a shorter time span.

React Native Base facilitates the creation of visually captivating applications that are easy to use. It contains a rich collection of React Native components with cross-platform compatibility, theme templates, and handy tools like starter component kits with keyboards, buttons, text fields, etc. This library enjoys ample customizable attributes and can be even updated with additional features. As such, developers can create an agreeable interface effortlessly as well as speedily.

Shoutem functions by employing modular building blocks or extensions like galleries for videos/photos, events, products, restaurant menus, etc. It works in the same manner as a website created using plugins on WordPress.

React Native Vector Icons offers over 3,000 icons that can be styled, extended as well as customized as per your project needs. This library supports Toolbar Android, TabBar, image source, and multi-styled font. It’s an apt choice for creating logos, buttons, and navbars. The package utilizes the animated library of React Native and integrates it with an icon for building an animated component. If an icon font having an associated CSS file already exists, an icon set can be effortlessly generated with the help of a generate-icon script.

This library allows integrating map modules into React Native mobile apps. It provides various methodologies of customizing the map style, allows changing the position of the mapview, and enables the creation of animations when zooming into the required location.

This is an open-source element library that comes with components having material design standards. This cross-platform library provides theming support. It offers light, as well as dark themes, and users can seamlessly switch between these two themes. The Appearance API of React Native is used for implementing theme switching as per the device’s settings while customizing the theme.

This library helps in creating the chat UI in React Native apps.  React Native Gifted Chat comprises fully-customizable components written with Typescript and enables an array of actions including copying messages to the clipboard and stacking of previous messages. Moreover, it offers numerous features to speed up the process of messaging and make it more effective altogether. Furthermore, this library offers easy-going composer actions having multi-line input that enables users to attach media.

This is a free starter kit employed for React Native applications. It comes with a React Native boilerplate that assists in the app development process. This library is easy to install, has been created as per the best practices, and most importantly, the boilerplates can be effortlessly adapted to React Native projects. Its support for standalone projects and ability to function with iOS as well as Android is commendable. Besides, development teams can select a boilerplate from various options or create one of their own as well. The addition or creation of app features is possible on account of the modular plugin system.

React Native Camera turns out to be an immensely useful component when the camera feature needs to be implemented within apps built in React Native. This component supports videos, photographs, text recognition, barcode scanning, and face detection; and enables react native developers to effortlessly communicate with the device’s camera using a few easy functions, without needing to think about the native code.