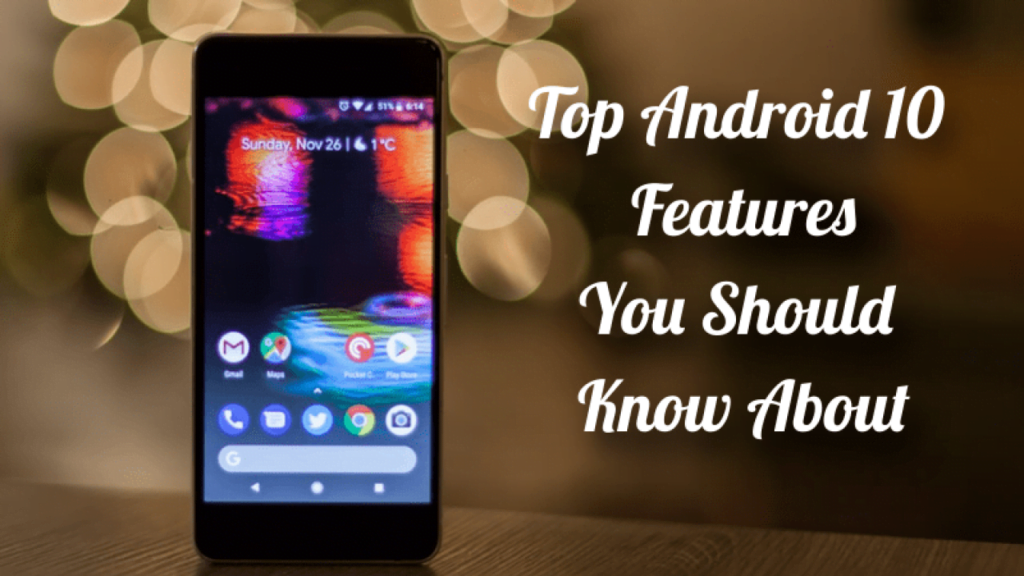 Android 10 was released on 3rd September 2019 as the 10th major release of the popular operating system. Asia, and more specifically India, has been the choice of the Android market. There are plenty of Android app development companies in India, and so are the Android app developers. The latest version of Android i.e. Android 10 includes a range of new features, performance improvements, and bug fixes, ranging from a true dark mode that helps to save battery life to privacy enhancements and a fun live caption feature. Google originally named Android releases after desserts, while this version, in the beta stage, was dubbed Android Q. However, it is now clear that Google either put their naming strategy on hold or scrapped it all together as the new name for this update is Android 10. In any case, following is a list of features of Android 10:

1. Dark Mode – Google has been experimenting with a system-wide dark mode for quite some time, but it has now finally been made official with Android 10. Dark mode can be enabled via a quick-tile setting, or when the battery saver option is enabled. In addition, the dark mode will also affect Google Photos, Podcasts, and Search. It’s certainly one of the most crowd-pleasing features of Android 10, having been demanded for a long time. Google is also partnering with third-party developers to introduce dark mode in their apps.

2. Focus Mode – One of Android 10’s most prominent features is the Focus Mode, which is an extension of the Digital Wellbeing app. This mode helps you focus, by pausing apps that you find distracting for specified periods and hiding their notifications.

3. Improved Files App – Google’s previous Files app was a straightforward affair and the app drawer didn’t even have a shortcut. However, the Android 10 Files app not only has a shortcut, it also provides an updated UI, a universal search bar, and quick access to other applications.

4. Quicker Access to Settings – Wi-Fi, Bluetooth, and other connectivity options are already super easy to toggle, but Google makes this process a little easier when you’re in apps with the Settings panel. This new popup window can be called upon by apps in specific situations. For example, you open a browser when in airplane mode. The browser will ask you to enable Wi-Fi, and then invoke the settings panel automatically.

5. Navigation Gestures – Android 10 has removed (most of) the bottom navigation bar and introduced new full-screen gestures. So instead of the three icons at the bottom of your screen, you’ll see a black strip with a white dash in the middle (or white strip with a black background depending on the background color of the page). You have to swipe up to go home, swipe from the sides to go back, and swipe up and hold to switch between apps.

6. Google Assistant Handles – Switching to gesture navigation means you can’t access Google Assistant via the home button any longer. However, you can activate it with an inward swipe from the lower corners of your screen. This activation method is not recognizable, so Google has included visual cues in the form of “handles” in the corners.

8. Wi-Fi Sharing with QR Codes – This Android 10 feature allows users to share their Wi-Fi via QR codes. It is easy to use, as you tap on your Wi-Fi connection, click the Share button, and then authenticate with a password or fingerprint on your phone. You should see a QR code from here, and your friend will scan the code to get access to it. This feature has already been implemented in many third-party brands.

9. Privacy Controls – The Settings app now features a dedicated Privacy section in Android 10. Opening it will show the various permissions that applications can request for including camera, calendar, contacts, microphone, and venue. Android has always lacked a straightforward way of seeing which apps can access what data on your device. The new section makes it easy to determine and revoke permissions for particular apps.

10. Seek bar for Music Notifications – This is an Android 10 feature that might take you a while to notice. You can now skim through music straight from the app’s playback notification using this feature.

11. Smart Replies – Smart Response is one of the best features Google has to offer, which predicts what you’re going to say in response to a message. It is currently only available for Google apps, but is now coming to all Android 10 messaging apps.

12. Live Captions – Google developed Live Caption as a means to make Android more accessible. Even without a data connection, the feature will live-caption any video being played. Play a video, then press a volume button to enable Live Caption. Tap the caption button at the bottom of the volume slider. You can move the caption around the screen by dragging it.

13. Improved Share Menu – We all are familiar with the share menu in Android that always takes a few seconds to fully load? In Android 10 however, all the sharing options are initialized before you open the menu, which means it’s much quicker. In certain cases, you will even get a preview of exactly what you’re sharing (a picture, link, etc.). The new sharing menu is also supposed to be better at recommending apps and contacts for sharing.

14. Location Permissions – Android 10 provides more control over how location information can be used by an app. Before Android 10, it was always on and (potentially) always monitoring once you gave an app access to your location. Now with Android 10, you can only allow your location information to be accessed by an app while you are actively using the app. This is not only an essential matter of privacy, but will also help save battery life.

16. Security Updates via Play Store – Another big feature that comes to Android 10 is Project Mainline, Google’s attempt to provide some security updates through the Play Store. This will considerably reduce the waiting time for security updates in theory as you won’t have to wait until your operator accepts the update. In addition, it shouldn’t entail a lengthy installation process, as it will work in a similar way to app updates. The only real disadvantage to this approach is that this method can’t fix some security vulnerabilities, requiring a traditional security update anyway.

17. Undo App Removal – In Android 10, you have a few seconds to undo the change after a removing an app. You’ll find an undo button at the bottom of the screen as soon as you delete an app.

These are the major features to be implemented in Android 10. There must be other features which we might have missed out on, which you can check out yourself on your Android device.

krunalvyas is author at LeraBlog. The author's views are entirely their own and may not reflect the views and opinions of LeraBlog staff.