Technology seems to solve many challenges that companies had been facing for so long. We have so many choices that we almost get confused about choosing the right one. This goes same with choosing the right Java Framework for web application development. There are many frameworks available but it’s two which is favored the most – Angular & React.

While both have their own advantages and disadvantages, its basis the need and favor`, developers opt their preferable framework for web application development. Both are JavaScript (JS) technologies that are used to create interactive single-page applications (SPAs).

“State of JavaScript (a web portal that surveys developers)- While both React & AngularJS are widely known frameworks, 20, 000 developers prefers React when it comes to adoption to the framework.” 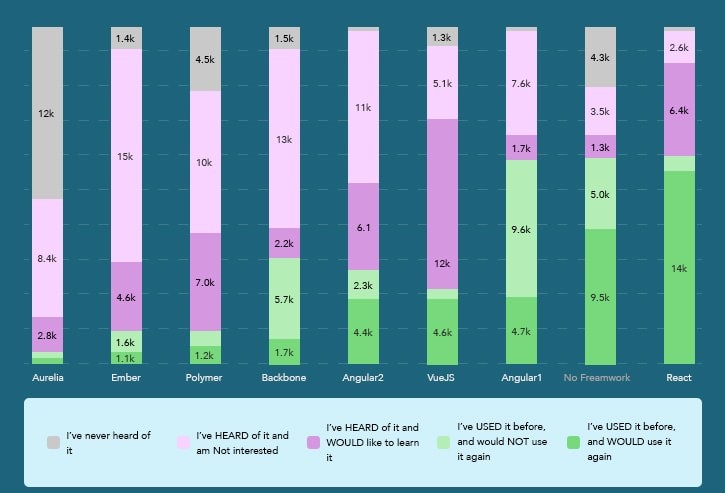 If we talk about the core development of both the framework, it has already been stated above that both Angular and React are supported and used by big companies like Forbes, Facebook, Google, Whatsapp, etc.

Google prefers Angular in most of their projects like AdWords UI (implemented with Angular and Dart). Angular offers full framework i.e. Model-View-Controller framework. While React takes care of view component only.

AngularJS uses two-way data binding to connect the Document Object Model (DOM) values to Model data. Two-way binding means that if the user interacts with input and provides new value to the app, then both the View and Model is updated.

Being the desired framework, AngularJS comes with few drawbacks too. Few to enlighten are:

On a different note, if we talk about React Library, there is an advantage that React has over AngularJS in regard to data binding. Unlike AngularJS, React follows one-way data binding approach. This means that a developer can easily direct the flow of data only in one direction. It becomes easy to track where exactly the data was changed.

The one which is introduced in the market earlier than others has an added advantage of market adaptation. Here, if we talk about comparing both the Java Framework, React has an added time-to-market advantage as it was released 3 years prior to Angular.

It has already gone through real-time world problems, critical testing, and user adaptation challenges. This surely has developed React into an adaptable and flexible front end-library favored by many.

Coming to the Angular framework, it has 6 times more issues than React which is obviously not good. However, there are few things that Angular is considered best with. For instance – Angular is a much larger framework, and also has fewer developers using it in recent times since it was released in 2016.

Thus, there are chances that it will continue to thrive with real-time changes in the framework and will gradually be accepted by app developers.

To sum it up, it’s evident to say that each of the frameworks has its own unique set of features with its advantages and disadvantages. Though many developers still prefer to React for web application development, one cannot ignore the fact that Angular is rising with an unexpected rate in the market.

The preference of the framework depends on the project that you want to develop. Once having the entire details of the project, then only one can decide and choose the framework to proceed with. It’s essential for developers to conduct in-depth research on the required technologies depending on the project’s specifications. Whatever selected, it surely is going to bring the benefit to the project.

ritasharma is author at LeraBlog. The author's views are entirely their own and may not reflect the views and opinions of LeraBlog staff.