Rapid Application Development is a form of application engineering where functions are developed independently just as if each of them was a separate project. Once each other function is built and operationalized, they are assembled into a time-boxed prototype. It is also said to be a form of agile software building method where prototype iterations and releases are prioritized. 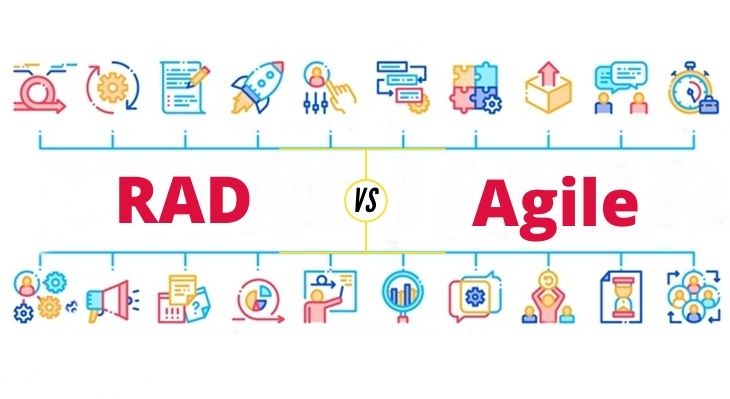 RAD makes it much easier for application developers to build or even change product components more rapidly. The key focus of this article is to establish the difference between RAD and agile. By the end of this discussion, you should have clear answers to the question “what is rapid application development?” and “how does it compare to agile?” In essence, this process therefore makes Creatio software development easier and improves customer experience. In fact, being a very open process, RAD model inspires active customer feedback even at the early stages as the increased visibility makes customers more willing and ready to interrogate the processes for a customer-focused output.

Rapid Application Development is carried out in five key phases. These include planning, designing, development, testing and deployment. On the other hand, the five key phases of agile model include planning, designing, building, testing, review and launching. This model is basically based on three principles – visualize what you have planned to do, reduce the volume of work in progress, and enhance flow.

The Difference Between Rapid Application Development And Agile

First, while Rapid Application Development model implements application development through prototypes, Agile does not. This way, RAD delivers dirty quick prototypes in the first stage before they are refined into fine quality usable codes. Instead, Agile insists on the systematic building of each feature in an incremental manner without requiring prototypes.

Secondly, RAD software development model implementers do not focus on quality in the first stages of app development. They therefore consider building all the key features sketchily before refining each one of them into better quality codes over time. With Agile, the solution is broken down into features. These features are then developed more incrementally and delivered without living any bits behind.

Thirdly, Rapid Application Development teams reveal screen prototypes and mock ups to customers. These are generally in the form of simple table lookups as opposed to the actual computations and is a sign that customers are more likely to have an idea of the situation or position of the process in the pipeline. This is too far from what Agile model does as customers are not shown the stages. The Agile team therefore only demonstrate to customers the end product after every iteration.

Finally, RAD model makes it much easier to implement existing prototypes. It therefore becomes more difficult to use the model if the company does not have a similar type of project or an existing code to utilize. On the other side, Agile model cannot be used to implement small projects. This is because such projects cannot be easily divided into small parts for incremental development.

RAD model requires that developers be more engaged with clients in order to communicate assessment processes and feedback. In addition, as a model that is mainly focused on user interface, it is basically used for prototyping based on feedback obtained from customers.

On the other hand, Agile model can only be executed by professionals that have been previously exposed to concepts such as continuous testing. However, for lack of documentation, upcoming developers are not adequately guided on the final outcome of the projects. Additionally, this model is less suitable for low-budget projects. It is therefore only suitable for complex projects that involve large number of developers. If you are a startup company, this gives you more reasons to choose RAD for your business.