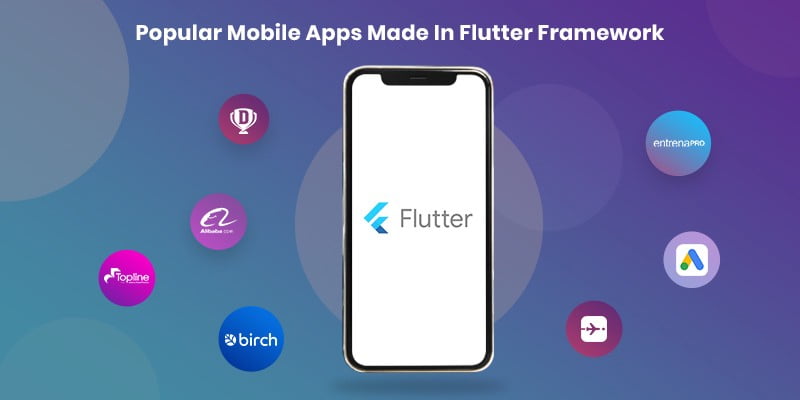 The Flutter framework, launched by Google in 2017, has gained a lot of traction in the developers’ community within a short period and has emerged as one of the best options for cross-platform app development. That happened due to the bestselling capabilities that Flutter comes with, which include:

This article enlists the top Flutter applications that have garnered unprecedented popularity. The following information would prove handy for all the would-be app creators.

This popular application, available on both- iOS and Android, is a necessary tool that helps businesses to manage their ad campaigns effectively. Entrepreneurs can create ad campaigns that allow them to market their services in a better way and expand their customer base without any hassles. Google Ads not only features an impressive design but also enables the users to obtain a host of information with just a few taps on their smartphones. Entrepreneurs using this app enjoy the following benefits:

Birch Finance deals with credit card rewards and assists users in managing and optimizing their existing cards. It guides the users to find the card that is best suited to them based on their spending pattern, helps them to track their expenditure across all accounts, and also provides various options for earning and redeeming rewards.

Cryptograph, another marvel of Flutter app development informs users about the most recent data and figures concerning 1,600+ cryptocurrencies, like Ethereum (ETH), Bitcoin (BTC), Ripple (XRP), Dogecoin, etc. Using this app, users can view the charts on Exchange rates, select as well as add coins to Favorites for easy tracking, and many more such functions.

Healthcare and Fitness: Coach Yourself and Watermaniac

Coach Yourself is a fitness, healthcare, and meditation app that focuses on the wellness and personal development of users. One of its unique selling points is that it helps users perform meditation to enhance mental health and usher in positivity.

With Watermaniac the users can track the amount of water consumed daily. The app empowers users to set a daily goal regarding water consumption, save the history of every drink taken throughout the day, and receive customized notifications that remind them about drinking water.

Reflectly, is an AI-empowered lifestyle app with an alluring dashboard, using which the users can create their personal journal. It sends the users a new set of questions every day, for identifying their lifestyle, stress levels, thoughts, and inhibitions. Users can pen down their thoughts and feelings. The app aims at gauging the users’ state of mental being and provides them handy advice on how to cope with their existing problems.

The users of the Flutter app Hookle, enjoy the facility of sharing posts, monitoring social activity, and most importantly, managing several social media accounts in a single place. One can compose posts and publish them, monitor activities through multiple channels at one go, customize the posts as per the social media channel, etc.

Pairing, the dating app connecting singles, comes with an easy-going and intuitive interface. It is a safe option to pick as the connections and matches made, involve the real-life user community.

Using this Flutter-based app, one can stay tuned to the up-to-the-minute happenings in the world of Broadway musicals, like new videos, news concerning music, and tour schedules. The users can also buy merchandise and take part in Hamilton lottery contests. One of the most notable special offerings of this app is its Karaoke system that allows users to sing their favorite numbers.

The mobile app Xianyu, another end-product of Flutter app development, built by the China-based tech giant Alibaba, functions smoothly on Android as well as iOS. It is appealing, speedy, and easily understandable. It connects buyers with retailers under one single ecosystem. Xianyu has been downloaded more than 50 million times and claims that there are 10 million active users daily. Alibaba already had a pre-existing app with millions of users, but for a smoother UI/UX and a time-saving solution, the Xianyu team opted for the Flutter framework.

This navigation app provides commuters with real-time information about bus schedules like the arrival time, nearby stops, as well as seating availability in them.

This Flutter app enables users to have real-estate information at their fingertips. It not only allows you to effortlessly, find, sell or buy property, but also helps in other related tasks like calculating mortgage.

The aforesaid examples indicate that the Flutter framework can not only create disruptive solutions regardless of the industrial sector but also fetch humongous profits for businesses.

Shelly Brown is author at LeraBlog. The author's views are entirely their own and may not reflect the views and opinions of LeraBlog staff.