A smartphone is pretty personal thing, but a tablet is not the same, and it is frequently used by several people at the same time, sometimes a whole family. "If you allow your husband, wife, grandfather, grandmother or child to use your tablet, why not to give this right to your cat as well", developers. thought So, in this article we will talk about a few “cat-like” mobile applications for Android. 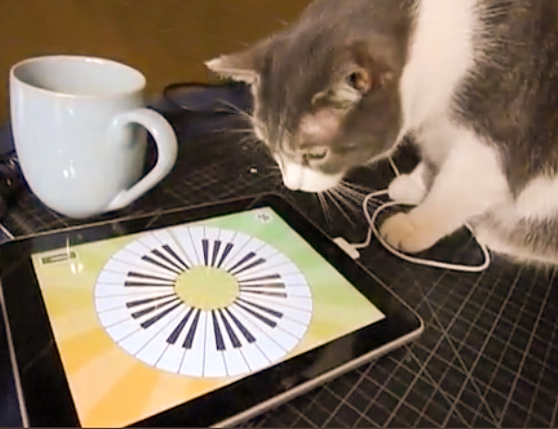 There are dozens of programs in App Store and Google Play such as “applications for cats", and the most popular programs here are games. The plot, if that word applies to a cat’s game, is the same: an object moves across a screen, designed to draw a cat's attention to it and make your cat violently smash with its paw on the screen, hoping to catch a prey. Many cats are offended because they are fooled in all cases.

Top 5 Android applications for your cat include the following programs:

It's one of the first, from a historical point of view, applications for cats. Game for Cats consists of three games. “Laser Pointer” is available for free, for the rest-”Mouse” and “The Butterfly” - you will have to pay $5. Every time when a cat hits a target with its paw, it gets a hundred points. It doesn’t matter for a cat actually, but its owner can share these results on Facebook or Twitter for example. At the same time your pet's achievements are loaded to the “Game Center”.

The same developer as in the previous game created this app, and that's why it has the same principle, but fewer characters: one mouse runs on the screen. But a spot of color appear at the place where a cat strikes. Your pet does a few swats, and you receive an abstract painting, which can be saved to the gallery, sent by mail, put on Instagram or printed and hung on your wall.

The number of applications (more than one hundred thousand in Google Play) proves once again that the main thing is a ridiculous idea, and everything else will follow. The developers claim that they have created a universal translator from any human language (except Swahili) into cat’s one. Download the program, press the record button, say a phrase that you want to convey to a cat, and listen to “meow” translation.

Catch and Paint Games for Cats

This program has six different games inside. The first one will remind you Paint for Cats somehow, but more different tools can be found there: you can choose the color of a background, a mouse type (schematic or naturalistic), and so on. The second, third, fourth and fifth games are such called "catches): a mouse, a spider, a butterfly, or fish moves on the screen, and your task is to catch them with your paw.

This app is perfect for your meditation actually, as it reminds a wallpaper: a pond bottom, fish, relaxing musicâ€¦ If you touch a screen, fish are scared, and they chance the way of their moving.

Despite the fact this application wasn't announced as the one for cats, your cat will definitely like it. They like sitting and watching how fish move, and listening how bids sings.

Provided by Alex Strike, a young blogger and consultant of mybookezz.org.

Alex Strike is author at LeraBlog. The author's views are entirely their own and may not reflect the views and opinions of LeraBlog staff.