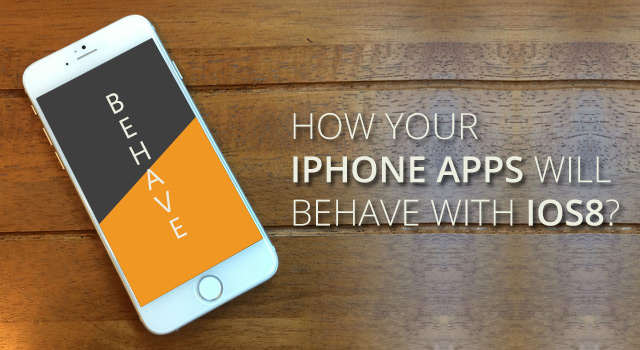 Apple has announced that it has made some very interesting changes with their iOS. With the introduction of various new APIs, widgets, HealthKit, CloudKit, HomeKit and many more have made iOS developers to think a lot before designing their future app. So with some extraordinary number of possibilities they can now think of new ideas where they could take their applications. It looks very amazing to read about the new technology but how it is going to work practically is the question that you have to look for. Here in this post we will discuss about how your original mobile apps will function in iOS8.

A very stiff integration of OS X with iOS is a very interesting development done by WWDC in this year. Particularly the handoff API will allow you to make transitions from a mobile to the desktop and also vice versa to make things as easy as possible. Company like Spotify can use this feature for playing your favourite music across the devices as you leave for work, shifting the songs from your mobile to laptop or vice versa you do not have to skip a single beat.

HealthKit has got a very nice plug with the new Apple iOS8 and that too for a good reason. This application is going to bridge the data across the number of health apps and fitness trackers to make the record for your overall physical and mental conditions. Third party applications like Strava and RunKeeper will also make things possible in both the ways push as well as pull the data and no longer be able to both push and pull data, that no data will be available isolated on either of the platform.

This features that is present on the iPhone is a neat but is a slightly strange feature. Now with the launch of iOS 8 developers it will be able to take advantage of this touch ID authentication within their own applications. Amazon could take this Touch ID API to make your purchasing well organized and well secured instead of asking the user for credit card verification.

With the new update of iOS 8, users will now be able to install custom keyboards that you can access over your system. It is important to know that for using these keyboards you have to ask for the permission to connect your phone online and you won't be allowed to access the secured password fields. Despite of all this, the applications receiving expectations with a custom keyboard is the use of 1Password - an identity and password management tool with applications on Windows, OS X, and iOS.

Your favourite applications will now be able to display custom widgets with the new view of the notification centre. It will also provide some customized interactions for pushing notifications as well as the widgets.

There is no doubt in the fact that it is going to be a very hyperactive time for the iOS developers as they will have to look into the potentials of iOS 8. There is a lot to consider when talking about terms of features and the experiences given by users. All this will definitely result in some good quality iOS apps.

macyjones is author at LeraBlog. The author's views are entirely their own and may not reflect the views and opinions of LeraBlog staff.