In the not too distant past, most top app developers looked down their noses at hybrid apps. These apps were considered sluggish during page and state transitions, and could not harness the power of a native application. The opposite was the case for native apps because they appeared to be faster and with a native feel.

In today’s mobile development world, hybrid apps are starting to catch up on native apps, and Java’s “Write once, debug everywhere” phrase is now being taken seriously by many developers. Thanks to frameworks like Cordova, React Native and more; plus native plugins that now make hybrid app development a dream come true for many developers.

Even though some argue that users are paying a price for quality and speed, the wonderful features of hybrid apps development might convince you to pick this option on your next project. Let’s take a look at the main reason developers and their clients choose to build hybrid apps. 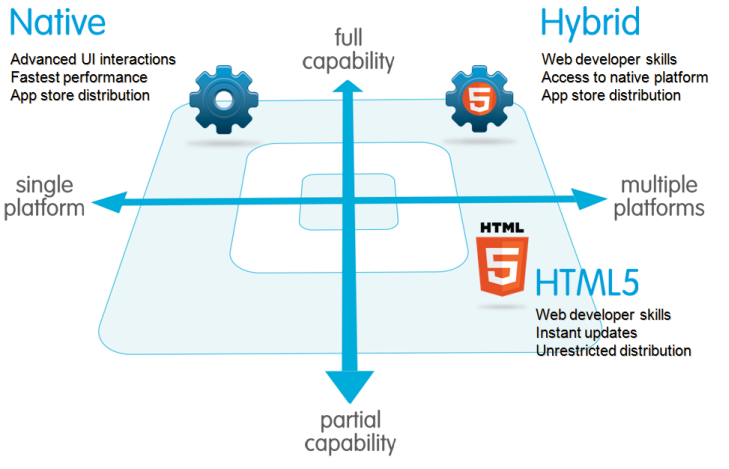 From a business standpoint, the main factor that influences mobile development decision is cost. The core advantage of a hybrid mobile application is that you don’t have to develop a separate app for each platform. Hybrid apps are cross-platform by design, solving most of the financial hurdles faced when developing for all platforms. In many boardrooms, stakeholders will likely question the cost implication of paying for a single native application, which can sometimes be triple the cost of a hybrid app.

Choosing hybrid development means that you don’t have to hire an iOS, Android, Windows or Blackberry developer. Simply because a single hybrid developer will write a source code that can be used across all platforms. This means that the cost of developing your app will be a fraction of what it would have cost originally if you had gone with a native app developer for a single platform.

Hybrid apps at core are regarded as web views. So with existing HTML, CSS and Javascript codebase, a hybrid app can be born. However, don’t confuse web apps with hybrid apps. Hybrid apps are a more advanced form of web apps, as they have more native functionality, look and feel.

For some developers and corporate organizations, this is a better choice. They can use their existing codes to create an app that has the same functionality as their existing websites. This is important as it saves time, money and preserves the original codebase.

Creating a native app means that the developer has to define all devices individually and create separate layouts too. Even though this can be achieved by automated queries, it usually involves multiple stylesheets and javascript. Making native mobile development even more time-consuming and non-transferable between operating systems.

Developing a native application can be time-consuming because a different codebase has to be written for iOS, Android, Windows, and Blackberry. But if developing with a framework like Ionic, all platforms can be built by simply running several CLI commands.

Faster development, mean fast deployment. The Minimum Viable Product (MVP) approach makes this type of application development necessary for some organizations. Products can go to market quicker, making your company the first to penetrate the market and grab a substantial market share.

Easy to Maintain and Upgrade

Another advantage of hybrid apps is the ease of maintenance. Because the source code is a multi platform, hybrid app developers can carry out maintenance and upgrades with ease.

The flexibility of adding extra functionalities can be achieved by using plugins. Most hybrid platforms have modules and plugins are developed specifically to add new and advanced features. Imagine the beauty of having all your multiple app versions benefit from a new plugin or module in one installation. Whereas adding new functionality to native apps, means that mobile developers will have to spend hundreds of development hours replicating the same feature on multiple platforms.

If you are familiar with using various browsers, then you know that websites look different from browser to browser. The user experience of an app built with a hybrid codebase is user-friendly and makes branding easy.

Improvement in UX for users is a key feature of hybrid apps because no matter the device used, hybrid apps will naturally adapt. This doesn’t mean that native apps are less user-friendly. Some native apps have the most amazing UI and UX. But with hybrid apps, it’s relatively easy to brand your app and get your app developer to achieve that look and feel that you want for your organization.

With the use of scripting languages like SASS and HTML5, so much can be achieved. Mobile app developers also make use of themes and design elements to get the desired results for their clients. So next time you start a mobile development project, ask for a sample or prototype. Getting a mockup or design of your app before the development begins, can help you decide on which functionalities you want. This will go a long way in reducing any rework, and will keep you and your developer on the same page.

It is worth mentioning that native apps are the best choice for faster graphics and fluid animation. Native apps are built with programming languages like Java (Android) and Objective-C (iOS) and can access native API’s more fluidly than hybrid apps. Gaming, video and other high resource apps are usually best developed with native code and will perform better than if developed on a hybrid framework. However, if you are planning on developing an app that will not be resource intensive, then your best choice is hybrid development.

Hybrid app developers can now take advantage of hybrid and native functionalities during development. Even though the issues faced by hybrid app developers is a lot; as the years go by, they are slowly decreasing. Multiple solutions are being provided by developers to ensure that these apps live up to the hype. Projects are forked every hour to help newbie developers fix development problems and come up with innovative ways of building hybrid apps.

At this moment the cost of building hybrid mobile apps makes it a very attractive option. For some organizations, the difference in performance when compared to native apps isn’t important enough to justify the extra cost and effort. But, as more native resources for hybrid coding appears in the mobile development world, things are starting to get interesting. Will hybrid apps take over? Are native apps slowly becoming redundant?

So before jumping on the hybrid bandwagon, take a closer look at the project at hand, and consult an experienced app developer before deciding on how you want your app developed.

Melissa Crooks is author at LeraBlog. The author's views are entirely their own and may not reflect the views and opinions of LeraBlog staff.