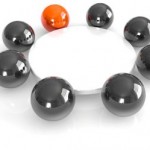 What comes to mind when you think about the greatest partnerships of all time? Simon and Garfunkel? Ernie and Burt? Peanut butter and Jelly? While all of those partnerships successfully feed our hunger for entertainment, they don't exactly change the world for better or worse. For that, we need to look elsewhere.

My candidates for the most important collaborations involve technology. They are particularly important, not just because of what they have produced, but what they teach us about what it takes to be a successful business.

This partnership has just been announced and has born no fruit. In fact, it will not really take effect for another year. But none of that stops it from being one of the most important partnerships in modern business. These behemoths of innovation have crossed paths before with mixed results. For a long time, Apple computers ran on silicon that was based on IBM's work. PowerPC had a good run. But it ultimately could not keep up with Intel's offerings. In 2005, Apple announced that they would be dropping the PowerPC platform like the bad habit it had become. That 10-year relationship officially ended the following year when Apple started shipping computers with Intel inside.

Almost ten years after that WWDC announcement, Apple will be in an even more important relationship with IBM. This time, it is with the express purpose of solidly establishing Apple's mobile offerings in the enterprise. This has a good chance of actually happening for two reasons:

Additionally, Apple already has a strong foothold in the small business world due to the popularity, simplicity, and functionality of the iPhone and iPad. At this point, there are 1.2 million apps in the App Store. Many of those are designed for the iPhone as a business tool. One category that is booming contains the newer iPhone conference apps that make corporate events more accessible to attendees.

This deal with IBM will further solidify Apple's position with small business, and give it momentum as Apple pushes into the enterprise sector

There are also competitive reasons that make this a great time for this partnership. Microsoft has been plagued with recent product releases that have been unpopular with their business customers. Those businesses wanting to update their systems are looking for non-Microsoft solutions thanks in large part to Windows 8. Google's "open" policies have made it a security nightmare. This has forced Google to recently adopt Samsung's security solution, itself, no big win among big business types. Blackberry is in free fall. Suddenly, Apple and IBM look very appealing. It will be a while before the fruits of this deal are made manifest. But make no mistake about it, this is a very big deal.

No one, not even Apple, can make it to the next level without the support of other big corporations. Apple is a consumer company that offers consumer electronics to solve consumer problems. They are about as good at that as any company can hope to get. But consumer tastes come and go. Business tastes tend to be more settled, and can drive a company for decades once their products are adopted. Just ask Microsoft. If Apple wants the kind of stability enjoyed by companies like Microsoft and IBM, they need the support of the business world. After all these years, Apple is finally growing up.

Before the Open Handset Alliance of 2007, the smartphone world knew the true meaning of fragmentation. It was everyone for themselves. The closest thing to a unified platform was Symbian. Even before Apple introduce the iPhone and changed consumer expectations, it was clear that there was no future in mobile phone platforms of that era. Google had virtually no presence on any mobile device. They had obtained near ubiquity on the desktop. They needed a plan to do the same in mobile. They decided to build their own mobile platform and make it freely available to all OEMs.

The Open Handset Alliance was one of the most successful partnerships of all time as it brought together warring factions within the telecom industry under the same umbrella, and working towards a common goal. These were not fringe companies. These were some of the biggest names in the business from the carrier and OEM worlds. This was largely facilitated by the competitive reality that Apple was going to put them all out of business if they didn't cooperate with one another. Whether or not that would have happened is irrelevant. They were afraid of it, and that was enough. Today, there are upwards of 12,000 branded devices running Android from around 600 manufacturers.

Google had already won the search wars. But they won it on the desktop. Today, the desktop is declining while mobile is going nowhere but up. Had Google been satisfied with their winnings, they would likely be out of the game by now. Google didn't form partnerships to secure their dominant position in the current round; they did so to secure their position in the next one. Most other companies never saw the train coming.

This throwback pick is a nod to history which still offers lessons for us today. We all know that Thomas Edison invented the light bulb. Unfortunately, that is all that is commonly known. But Edison's great innovation would have been as obscure as Tesla's great works had Edison not won the financial backing of powerful investors. The lesson is clear: We owe innovation as much to the money men as we do to the inventors. Another lesson is that inventors without a business model have only invented half a widget. Woz may have provided the innovation, but Jobs provided the business sense. Innovation has to be financed with a return on investment.

Perhaps the most important lesson is that no great business ever does it without help. Behind every success is a collaboration that made it work.