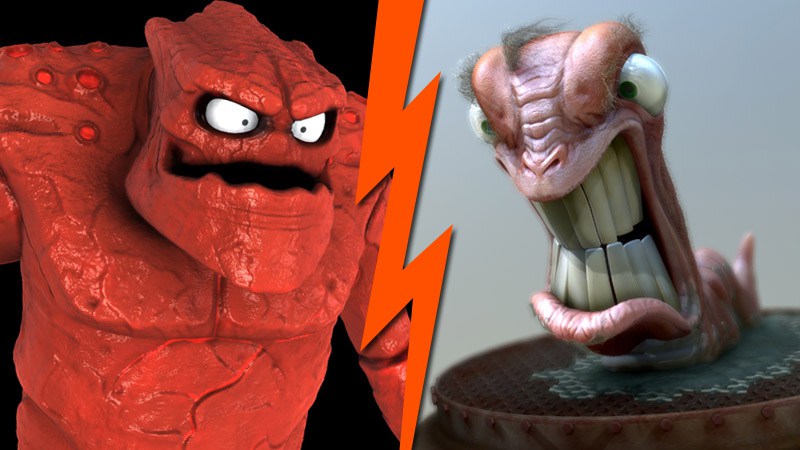 If you have watched any of the blockbuster hits which have adorned the cinema in the past year, you will note that there has been an abundance of features with CGI characters. What is more notable is that these characters are eerily realistic in their design, so much so that you may have missed the fact that the creation was generated by CGI. Why is this? With the advancements in technology as well as a competitive 3D modeling field, 3D animators, texture artist, and modelers have sought out more organic ways in which to model. As such programs such as ZBrush and Mudbox have really come to the forefront in cinematic CGI creation.

Why not the Box or NURB model?

In the end of the production the model will have to be in a format that can be rigged, so the question is “Why not use Polygons and NURB modeling methodologies to get the model?”. The answer is that in using the traditional methods, there is still definitive edges and a roughness to the character (even if turbosmooth and iterations are turned up) which looks fake. By using Zbrush and/or Mudbox, the creator can have the smooth organic look.

In addition to the organic look which can be accomplished through clay sculpting 3D methods, there is the workflow considerations as well. Major studios still use 3D Character artists and Clay Sculptures as a means of capturing the design. However, it is not uncommon for the Character artist to now use the 3D software along with the physical sculpture to present their conceptualizations, especially when the software caters to the tools of the trade rather than to the tools of the 3D modeler. This increases the workflow of the studio minimizing the need for multiple physical models (which are costly) in exchange for the digital clay sculpture that can be edited and then exported into the program.

How Zbush and Mudbox may change the modeling norms

If you look at the clay based modeling programs, one thing that the seasoned 3d modeler will note is that the output is in triangles. And where animation can still occur on triangles, it has always been the industry standard to use quads. However, with the shift to the clay models and the more organic sculpting, it is understandable that this norm has had a paradigm shift. Modelers do not want to have to convert an ultra-high triangle model to quads. Therefore, rigging and animation of these models has gotten a bit more complex.

Where the programs now typically cater to the exporting of the model to 3ds max and Maya for animation, it would not be alarming to find the programs (universally not just zbrush and Mudbox) develop their own set of animation tools which surpass these icons in the near future, especially when taking into consideration the popularity of such programs within the mainstream cinematic productions such as The Jungle Book.

No, polygon modeling still has a very dominant place within the CGI world. Where the organic and clay modeling has taken over the cinema, it has not strongly impacted the 3D printing or the gaming industry as of yet. 3D modelers are still thriving in these markets using the traditional methodologies as box modeling, NURBS, and splines. With this being stated, the 3D modeler must ensure that their models are clean, that they are ready for texturing if the textures are not already included on the model, and that the character can be easily rigged and animated within a game. If developing a 3D model for print, the character should allow for easy printing on systems which require CAD and STL formats. Having a low poly count helps in this area.

Modelers would benefit from diversifying their toolbox to include not only clay sculpting but any CGI modeling methods which are competitive on the market. By diversifying your portfolio you diversify yourself making you a commodity that people want to seek out.

What does this mean for the 3D modeler?

For the regular 3D modeler, this is good and bad news. The good news is that artistry can be focused upon more than the technique of the creation. There is more freedom to create organics and complex designs. Yet, this freedom does not come with a cost. As the models become more complex, so does the poly count. Cinematic films are showcasing ultra-high poly characters because they have the machines which can handle the rendering and the processing of the models. For the common 3D modeler, most systems can still only handle a high poly character, and those renderings must be on a platform optimized for 3D models and animation. Granted, you can use the cleanup functionality of the program and get the poly count down a good bit, but to achieve cinematic quality, a modeler will have to have either a render farm or outsource to get quality results.