Since mankind first discovered the ‘lodestone’, we have utilised the power of magnetism to our benefit. This magnetised rock of iron oxide can be used within a compass where it is affected by the earth’s magnetic field which causes it to point north.

According to the website HowMagnetsWork.com, the most popular legend behind the discovery of magnetism was that it was found by a shepherd called Magnes. He first discovered this seemingly magical rock when he was tending his sheep on the Greek island of Crete in an area known as Magnesia. The iron nails in his shoes and on the end of his staff became stuck to the piece of stone he was standing on 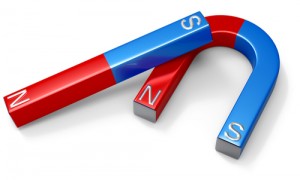 Although the science of magnetism seems perfectly ordinary to us, our ancestors viewed the lodestone with great superstition, believing it to be strongly associated with witchcraft. Its ability to attract iron seemed quite miraculous and it was widely held to have strong medicinal properties. Early Greeks, Romans and Chinese all highly valued the power of magnetism and used the iron oxide to ward off disease and keep evil spirits at bay.

It was not until the 17th Century that a scientist called William Gilbert explored the properties of the lodestone and discovered that the earth itself exerts a magnetic force. By the 19th Century science was developing an understanding of the strong link between magnetism and electricity, culminating in the discovery of the electron in 1897.

Magnets and the modern world

Having fallen out of favour in medicine for many years magnets have made a dramatic comeback in recent years. In addition to their use in alternative therapies to treat pain, insomnia and even depression, they are also used at the cutting edge of modern medicine: MRI scanners for example use Magnetic Resonance Imaging to give doctors a detailed picture of our internal organs and tissues, allowing better disease detection.

The Maglev train system in Japan uses the power of magnetism to ‘float’ the train above the tracks at speeds of up to 300 mph, making this a smooth, fast and energy efficient way to travel. Other industrial-level applications include the use of magnetic sweepers which detect and clear metallic objects from sensitive areas such as airports and loading bays. Systems on factory production lines often make use of the attraction and repulsion of magnetic fields to identify and separate metallic and non-metallic objects and materials.

Within the home, magnetism is used to project images onto our computer and television screens. Data storage makes use of magnetism as does your microwave oven and your phone. There is an astonishing number of different types of magnetic tapes which can be used for everything from fixing together components which need to be frequently unfastened to sticking pictures, photographs and memos to a metallic surface. With the help of self-adhesive magnetic tape it is now even possible to fasten or stick together non-metallic items and components.

Magnetism is all around us and helps our modern world to function and progress. Now thanks to the use of magnetic force in the Large Hadron Collider we can look forward to new scientific discoveries that utilise this powerful force.