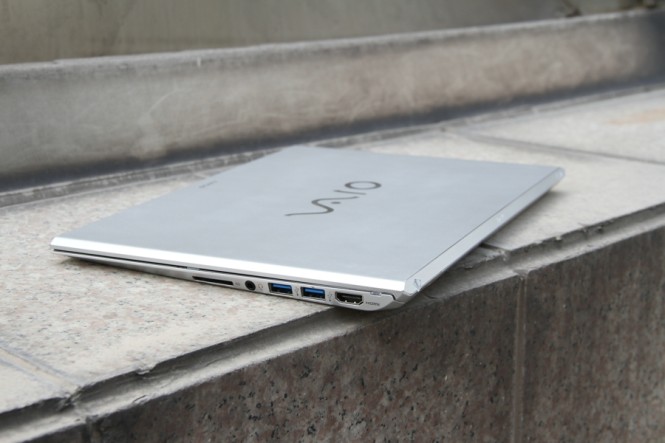 You’ve heard all the hype about how smartphones and tablets are taking the technology world by storm, how internet-reliant netbooks and portable devices are rendering the traditional computer obsolete, and how the golden age of laptops is behind us. However, the laptop is far from dead. Sure, we’re not as reliant on traditional computers as we once were, but nothing can rival the efficiency, practicality and productivity offered by a traditional laptop. The more significant shift is from desktop computers to laptops; this is especially noticeable in 2014, with a new range of cutting edge laptops from leading manufacturers scheduled for release. These laptops pack a portable punch - which means you probably won’t need that clunky tower anymore, not even for games or HD movies. That means that we are, in fact, just entering the true prime time of the laptop world. Let’s look at three fantastic new laptops that are leading the pack, and have already made a splash in 2014.

The famous Vaio has been a flagship for Sony consumer tech for a few years now, and with the 4th generation of its compact 13″ offering, it has truly come into its own. The form factor is quite simply stunning, boasting simple lines and a sleek aesthetic. The real carbon fiber body isn’t just durable and stylish, it’s also incredibly light-contributing to the Pro 13 Touch’s incredibly slight two pounds of weight. Available in Intel 4th gen Core i5 or i7 models, the micro-sized Vaio is also lightning fast, with an HD 4400 Intel graphics card and standard SSD hard drive. Last but not least, it’s one of few 13″ laptops to offer true 1920×1080 support, including an honest-to-goodness full size HDMI port. In case you’re wondering, yes, that ‘Touch’ in the title means this laptop really does have a fully functional touch screen with responsive 10-point sensitivity. The official battery life is a healthy 6 hours, but independent tests have actually exceeded that number, and an optional battery sheet can also triple the original capacity. Of course, you’ll pay for all the ‘ultrabook’ features and the Vaio name brand; 13″ models start at around $1,100 and can easily exceed $2,600 if you opt for the various add-ons and upgrades. If size, weight and quality are your priorities, it’s money well spent.

Can’t decide between a tablet and a netbook? Solving that dilemma without compromise was the major strength of Microsoft’s original Surface, and now it has a sequel. The tablet-with-detachable-keyboard Surface is now more practical with a sturdy double-sided kickstand and longer battery life, resolving two common qualms with its predecessor. It continues to weigh just 2 pounds and the exterior design is mostly unchanged; it’s on the inside where the Surface Pro 2 really earns its stripes. Windows 8.1 OS is the most noticeable upgrade for casual users, but it’s supported by key hardware upgrades like Intel HD4400 graphics and a Core i5-4200U processor. The Surface Pro 2 is available with 4GB or 8GB of ram, which is quite powerful for a tablet! At $899, the price tag puts it on the high end for tablets, but it’s really so much more than a typical touch-only device. Most importantly, it supports all the key Microsoft software that you’re used to having on your desktop, including Microsoft Office. Media sharing, saving and browsing is a breeze with a micro SD card slot, full-size USB port and Bluetooth. The included pen lets you draw on the screen with high precision. Speaking of the screen, its 1080p resolution and 16:9 aspect ratio also ensures that the Surface Pro 2 is the perfect portable theatre for movies on the go. The most praised feature of the new Surface Pro, though, is the battery life, which has been known to exceed 7 hours. That’s an improvement of more than 3/4 over the last model. If you want the benefits of a tablet with the functionality of a laptop, the Surface Pro 2 is a no-compromise solution.

Touch screens and carbon fiber are nice luxuries, but when it comes to delivering maximum security, durability and bang-for-the-buck value, a traditional workhorse like the HP EliteBook 820 G1 fits the bill better than anything else on the market. This laptop would be equally at home on the worksite desk of an engineer, in the research tent of a remote science base camp or in the cab of a police cruiser; a reputation earned in part by its military-grade specs. You’ll have to do more than drop the HP EliteBook to break its back. That functionality and durability shows in the simple, no-nonsense design; the metallic silver frame with black monitor border and keyboard sheet could be considered dated, but the myriad of plastic components are also logically and soundly designed. The EliteBook features a bevy of ports and disassembles easily to support a wide range of configurations. It packs a 12-hour battery life and charges rapidly. A 4G smartcard slot gives you another option for internet access. The EliteBook is available with SSD hard drives with an additional mini-card SSD slot. It belongs to the Intel Core i5 family (dual core, 1.6GHZ with 3MB cache), featuring Intel HD Graphics 4400. The 12.5″ display is also sharp and practical, with HD SVA anti-glare technology. But perhaps the most unique feature of this range, which makes the 820 G1 particularly business-savvy, is its security credentials. Proprietary features like HP Sure Start and Trust Circles are designed to prevent BIOS attacks, hacking, and accidental data leaks, provide easy encryption, and minimize the time required for IT to tackle viruses and other malicious software. Prices start just under $1,000, and if you need a trusty, simple, security-centric laptop with premium features, it’s hard to beat.

2014 is a competitive year for the laptop market, and the amazing models noted above are just a tiny sample of the cutting-edge advancements that are creating an impressive range of options for business and personal users alike. Whether it's a Sony Vaio, a Microsoft Surface 2 or an HP Elitebook, one of these great laptops is sure to deliver everything you need in a laptop and more.

To find more great 2014 laptops, be sure to explore the rest of searchbyproduct.com-tech reviews & guides for the latest tech information.