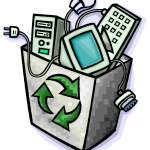 According to the latest Nielsen reports, about two-thirds of the country possesses smart phones. On average, Americans have 4 digital devices and spend about 60 hours a week consuming digital content. And manufacturers keep coming up with new technology enticing young and old to trade in their old gadgets for new ones with gleaming features. So what do people do with their old electronic gadgets?

According to the EPA, about 41.1 million desktops and laptops are discarded every year. Every 18 months, old cell phones are replaced by new ones. And only about 30 percent of these were recycled. The rest of the e-waste continues to be dumped in landfills around the world. And herein lies the silent, almost invisible assault on our environmentâ€”a battle waged by the irresponsible dumping of e-waste. Unconfronted, it could have a destructive effect on our environment. Here's why.

E-Waste Dumping: An Assault on our Environment

Electronic devices are made up of toxic metals like lead and mercury. Up to 60 hazardous elements can be found in complex electronics. These substances leak from the e-waste landfills into the soil and cause undesirable effects on the environment:

Contributing to the Problem

Many recycling companies that accept e-waste do not recycle or dispose of e-waste properly. 70-80% of e-waste that is sent to recyclers is not recycled but is exported to developing countries. These companies compromise on safety finding it more cost efficient to send e-waste to underdeveloped countries rather than having to deal with safely discarding the e-waste themselves. There's also more profit to be had as many of these third world dealers either re-sell electronic equipment, use parts that work in the manufacturing of new electronics or extract valuable metal such as copper and even traces of gold for re-selling.

Interpol has intercepted e-waste that is being illegally exported to countries in Asia and Africa on many occasions. It is legal to export used electronics to poor countries only if they can be reused or refurbished. Unfortunately quite a few companies are now taking advantage of this and are exporting e-waste as "used goods" when they are in fact non functional. As a consequence parts of West Africa and Southeast Asia are being turned into landfills.

Responsible recycling is nothing but going through the right channels to recycle your e-waste (or any other recyclables). Even though 75% of the U.S population recycles their waste, only about 30% of that demographic recycles electronics.

What can you do to mitigate the damaging effects of e-waste dumping? Here are a few ideas.

The Battle against E-Waste Dumping Needs You!

Right now only about 30 percent of e-waste is recycled. When we can recover 70 percent of our newspapers/mechanical paper and 91 percent corrugated cardboard, we definitely can do a better job at e-recycling! Every effort counts. The next time you buy a new gadget, make sure you lay your old one to rest in a responsible manner.