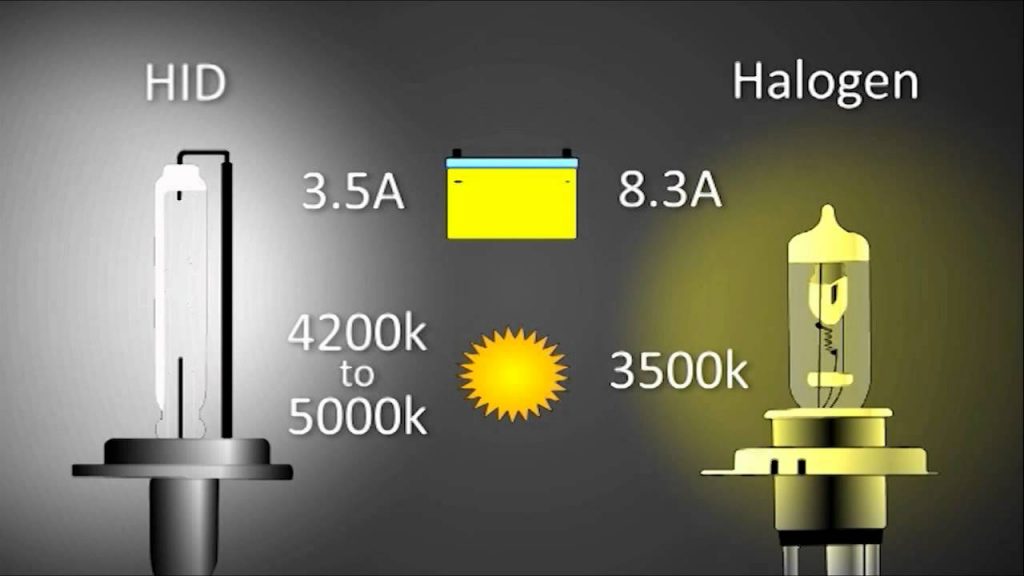 Since the most notable advantage of HID bulbs is their extended lifespan, let’s take a deeper look at why they last longer than halogen bulbs.

A huge number of older cars originally came equipped with halogen bulbs. These bulbs, although considered to be the industry standard, are known to have a shorter life span than some of the latest options.

Older halogen bulbs were designed to produce light through the use of an electric current and tungsten filament. As the current passes through the filament, it glows, producing light as a result.

Originally, halogen-tungsten bulbs were made using a filament sealed in a glass vacuum. In some cases the vacuum is filed with an inert gas. The bulbs usually burn out after the tungsten filament has been depleted due to extended use; after about 500 hours of use. Every time the bulb comes on and the tungsten filament is heated to produce light, some material boils off the filament. The material would then be deposited on to the glass cover of the headlight leading to the gradual depletion of the filament.

Technological advancements over the years helped improve the life expectancy of these bulbs by replacing inert gases and vacuums with halogen gas. Halogen gas reverses the depletion of the tungsten filament by collecting the material that boils off every time the bulb is in use and depositing it back on to the filament.

With time however, even these newer halogen bulbs fail. The material deposited onto the surface of the filament makes it rigid with time. This makes the filament susceptible to damage from vibrations that occur when the bulb is switched on.

Cracks and surface breaches are the main cause of premature failure in sealed beam headlights. Cracks can cause the halogen gas to leak out slowly, causing the bulb to fail, sooner rather than later.

It is also worth noting that Xenon-tungsten bulbs, variations of the halogen-tungsten where xenon gas is used to replace halogen, tend to last much longer than their halogen predecessors, and even HID bulbs.

The bulbs are designed with two electrodes, just like you see on spark plugs, which are electrically charged to produce a spark that excites the xenon gas, causing it to produce a bright light.

Since these bulbs do not have a filament, which can deteriorate over time, they last longer than halogen-tungsten iterations; with an estimated lifespan of 2,000 hours. It is however worth noting that xenon-tungsten bulbs last much longer than HID bulbs.

So, why do HID bulbs last longer than their halogen counterparts?

Now that you have a good idea of the design and operational differences that exist between HID and halogen bulbs, we can look at some of the main reasons why the latter have a substantially lower lifespan in comparison to the former.

First and foremost, as previously stated, HID bulbs do not have a filament that would otherwise deteriorate with time, leading to premature failure as is the case with halogen-tungsten bulbs. The absence of this specific part is the main reason why HID bulbs last almost twice as long as halogen alternatives. As previously stated above, halogen bulbs are susceptible to a variety of contaminants that cause premature failure.

Other Advantages Of HID Bulbs

HID bulbs have become highly sought after by car owners due to a variety of associated benefits, in addition to their longer lifespan.

These bulbs are also preferred for their ability to produce a bright white light that is similar to natural light. As a result, drivers enjoy better front, side and rear vision for better and safer driving.

To make things even better, these bulbs produce a higher amount of light while consuming a lower amount of energy. In practical terms, a halogen bulb rated 55 watts produces a similar amount of light as a 35 watt HID bulb. This means that HID lights place a lighter energy load on the vehicle they are fitted on.

Although HID bulbs are designed to last longer than halogen bulbs, it’s worth noting that there are ways you can actually ensure that they reach or surpass their estimated lifespan.

First and foremost, it’s essential that you avoid handling the bulb with oily hands. Oil deposits on the outer surface of the bulbs can substantially reduce the bulb’s lifespan just like it is for halogen bulbs. The right ballast housing the bulb should be a perfect match to the bulb being used.

The bulbs should be correctly installed, set at the right burn position (-/+ 10 percent) as per the manufacturer instructions. During use, it is important to avoid repeatedly switching it on and off within a short period of time. The bulb should be allowed to cool off before it is switched on, after being switched off.

Car owners who would like to replace older halogen bulbs with long lasting HID lights can do so with the use of HID conversion kits. These kits are sold by most motor vehicle parts sellers, online and at brick and mortar stores. They require effortless and quick installation. The extra cost of the conversion kit will be offset by the savings you stand to make by avoiding regular halogen replacements.