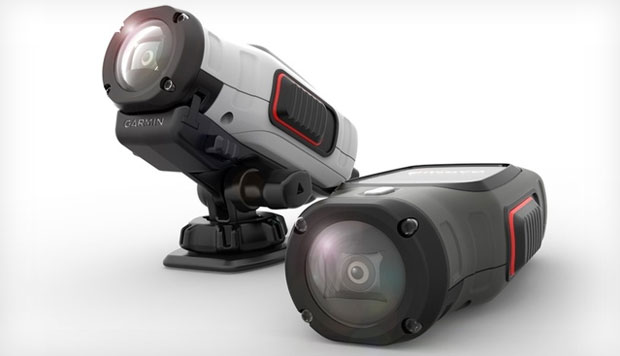 Garmin have recently announced their entry into the action market with the Virb. As a traditional GPS company, this looks to signal a new approach by the brand, possibly in reaction to declining sales in the automotive GPS market. The action camera market has up until now been dominated by one brand, GoPro. The functionality of the new Virb product, as well as Garmin's reputation within the consumer electronics market, means that Garmin look set to challenge GoPro's market share. But how do the two products compare? Let's take a look.

First impressions of the Virb are that it's a lot heavier than rival actions cameras like the GoPro. Weighing in at just over six ounces, the Virb feels like a quality piece of kit, and the rugged design should mean it will be at home in any extreme sports scenarios or adventure activities. The weight of the camera is also not helped by the fact the Garmin Virb has GPS and Wi-Fi built-in - but this is what truly sets it apart from the competition. As an example, with the Garmin Virb it's possible to set it to start recording once you hit a certain speed or height. The user will not have start switching on buttons mid-activity - definitely a bonus for an action camera.

It's also waterproof to a depth of 30 meters which isn't great, but compares similarly to the GoPro camera range. The battery life however is longer with three hours on the Garmin, compared to just two and a half on most of the GoPro devices.

Remotely Controlled Via Other Garmin Devices

Another interesting aspect to the Garmin Virb is the inclusion of ANT+ technology. This is exclusive to Garmin products, and means the action camera can be sync'd up with other Garmin GPS devices. If you own a Garmin Fenix GPS watch you will be able to control the Virb using the digital watch interface - another major difference between the two brands. As a real-life scenario, imagine the Virb is attached to a helmet, then the operator can simply control it from the wrist. This is a very compelling difference considering the target market for these kinds of devices.

Here are just some suggested activities which can be recorded using the Garmin Virb (or GoPro for that matter) to give you an idea of how you could use it.

The list is endless, but it's worth mentioning that the camera comes with digital stabilisation (just as the GoPro does) meaning that no matter how hectic your activity is, the footage should not be compromised.

Prices on the Garmin Virb come in two brackets. The basic model retails at $299 US Dollars, whilst the Elite version will be one hundred dollars more at $399. The difference between the two are the GPS and Wi-Fi capabilities. The cheapest GoPro camera is $200 so the Garmin is a little bit more expensive but a general observation is that it's worth the extra money - particularly if you add in the GPS and synchronisation functionality.

The Garmin Virb is available to purchase direct from the official Garmin web-store, with regular promotional offers being published on the major coupon sites such as RetailMeNot and Coupon Chili. You can click here to see an example of Garmin Coupons on the Coupon Chili website so it is possible to get it cheaper than the listed retail price.

Side By Side Tech Comparison

Conclusion on the Garmin Virb

Whilst the functionality of the Virb action camera does make it top the GoPro ever so slightly, it’s going to take a lot of marketing efforts to get the Virb as the market leader. The GoPro has a loyal customer base and is firmly entrenched as the number one action camera brand. Just go over to Youtube and type in GoPro and you will see the millions of user videos that are already online. I believe that it is going to need some awesome video footage uploaded by proper action camera users to get this camera up to the sales numbers of the GoPro.