The battle between Android-based smartphones and Apple's iPhone has been raging for years and doesn't seem to be going anywhere anytime soon. With the recent release of Sony's Xperia Z3, however, the iPhone seems to be falling behind in its specs and features. A myriad of technological and mechanical advancements have pushed the Z3 to the forefront of the smartphone race for the most effective, practical and desired phone on the market. 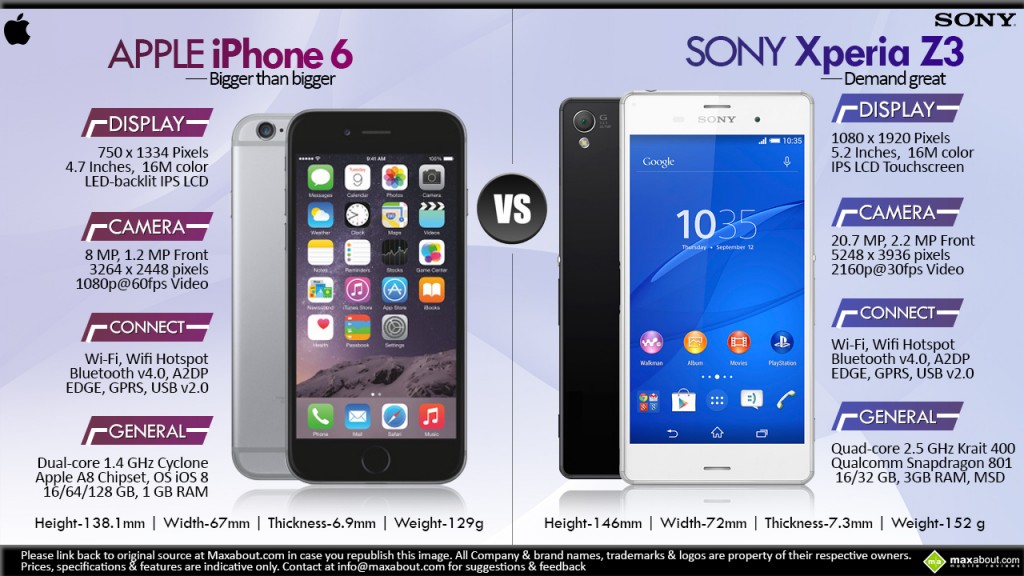 Because smartphones are used heavily for streaming music and videos, the battery life is by far one of the most important issues facing buyers. And, the Xperia is a champion in this area. With its 3100 mAh battery and improved standby processing and configuration, two days of battery life is quite common with average use. Even when pressed, the battery lasts longer than nearly any of its competitorsâ€”the iPhone struggles to make it through one day on average.

In addition to the extended battery, the Xperia has upgraded hardware powering the phone. It has a 2.5 GHz Quad Core processor running the new Android 4.4 operating system. It also boasts 3 GB of RAM, which is more than double that of the iPhone, making it much more stable when running multiple applications or viewing multiple pages on the Internet.

One of the biggest advantages of the Xperia over the iPhone is its durability. It has a durable screen and aluminum frame similar to the iPhone; however, the Xperia is dustproof and waterproof up to 1.5 meters for up to 30 minutes. This means that it will survive when you accidentally get pushed into the pool or you can intentionally bring it with you and take some pretty incredible underwater pictures with its 20.7 megapixel camera. You can even watch a video on International Business Times to see how waterproof the phone is. On the other hand, the iPhone doesn't even boast a splash-proof rating.

The Xperia comes with an impressive 20.7 megapixel camera. It also has a dedicated camera button, which makes grabbing the perfect shot even easier, especially under water. In addition to the camera hardware, Sony continues to widen the features of the software, giving you the ability to fine tune and adjust everything from the focus to ISO exposure. These are all features that the iPhone lacks.

The Xperia has another perk that the iPhone and other Android phones lack. It has the ability to link directly to your PlayStation 4 so you can play your console via high-speed Internet. This means you don’t need a TV to play video games. You can connect your PS4 controller to your phone and play anywhere on your network. You also can bypass the controller and watch your friends play over the PlayStation Network.

Whatever features you are looking to take advantage of, it is clear that the Sony Xperia Z3 beats the Apple iPhone. From battery life to gaming, processing power to durability, the new flagship Android phone from Sony is set to leave Apple in the dust.