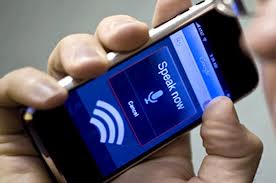 The focus on developing voice commands and technology for mobile devices is reshaping the user experience. Years ago Siri broke onto the mobile scene with the iPhone. This first major development in voice technology revolutionized smartphones for the average person. Now voice chat apps, "Ok Google" commands, wearable smart devices push beyond the realm of interactive mobile technology.

Rather than typing in searches on the smaller touchscreens, the user interacted with the artificial intelligence assistant to expedite the process and augment the experience. You could ask Siri any question and it responds with a valid answer from searching the internet or other resources available via the iPhone.

Despite the enthusiasm for the onset of voice activated assistance, 85% of iOS 7 users have never used Siri. These numbers can't negate the usefulness and benefits of the service. Smartphone users spend a significant portion of their time typing on touch screens texting, surfing the web, and using apps.

Did Google take a similar approach to Siri when developing the KitKat operating system for Android? Tech experts may claim this function draws remarkably similar comparisons, but unlike Siri, Google has the ability to integrate the updated search engine algorithms with mobile devices.

When performing a search for personal information or info online, the Google search bar automatically directs you to pertinent data on web results, your personal organizer or calendar, and preferred apps with the relevant info. The "Ok Google" function may not talk and interact like a personal assistant, but it gets the job done.

Even though Android remains ahead of Apple on the mobile global market, Apple's newer technology is available for widespread use and isn't limited to select devices.

The Changing Chat Scene with Voice

Overseas the rise in voice technology tells a different story than in the U.S. The Chinese app WeChat, Watsapp in India, and the U.S. based WhatsApp all focus on voice messages in addition to text.

Instead of texting, friends talk with one another sending instant voice messages. The ability to talk rather than type saves time. The rise in voice instant messaging signals a change in instant communication in China and India. With a high percent of smartphone users on chat apps, SMS messaging might become a thing of the past.

Other Industries Adapt to Voice

In the banking industry, Wells Fargo is working on developing voice recognition technology that enables individuals to access their bank accounts, manage their finances more efficiently, and take a new approach to online mobile banking. Will these features boast solid online mobile security that's almost unreachable to hackers? As the banking industry takes steps to gain ground in mobile technology, security will remain at the top of the priority list.

Retail and small businesses will start the transition into mobile applications to catch up with fast evolving technology. Even smaller sized businesses should consider speaking with a mobile app development company. Take the food and banking industries as examples of ways eCommerce, voice technology, and business apps make a difference in attracting and retaining customers. To succeed, businesses must quickly adapt to the ever evolving mobile world.

tedlevin is author at LeraBlog. The author's views are entirely their own and may not reflect the views and opinions of LeraBlog staff.