In the past couple of years, several Chinese smartphone manufacturers have entered the Indian market. This year, the latest China-based vendor to debut the country is the media streaming giant LeTV, which ahead of its entry in the country, rebranded itself as the LeEco. The brand marked its debut in India with the Le 1s and Le Max. The former is a budget smartphone that comes with enhanced security features, and is already up for grabs, while the former is a flagship that will go on sale later. One of the closest rivals to the LeEco Le 1s is the Chinese vendor Coolpad's Note 3. 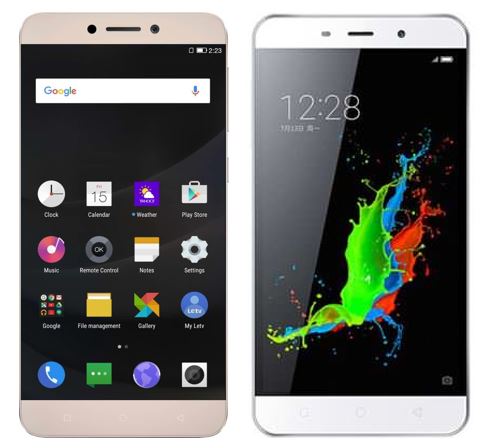 The Le 1s and Coolpad Note 3, both are sub-Rs 11,000 smartphones that offer compelling specs and fingerprint sensors. The Note 3 is one of the few devices to sport a fingerprint sensor in the sub-Rs 9,000 range. If you are finding it hard to choose among these two, let's compare their specs so you can decide better.

Talking about the design first, the Coolpad Note 3 comes with a plastic body with curved edges along with a soft matte finish, which the company has branded as Baby Skin. The device measures 9.3mm around the waist, and tips the scale at 155 grams. The Le 1s on the other hand sports a more premium all-metal design. It is slimmer than the Note 3 at 7.5mm, but gains a few extra grams of weight (169 grams) thanks to the all-metal design. Both the smartphones have fingerprint sensors located below the primary camera. Overall, design-wise, the Le 1s looks much better than the Note 3.

The LeEco Le 1s flaunts a 5.5-inch full HD display with a pixel density of 401 pixels per inch and a layer of Corning's Gorilla Glass 3 to keep it safe from scratches. The Coolpad Note 3 also sports a large 5.5-inch display, but offers a lower HD screen resolution and a pixel density of 267ppi. Overall, the media viewing experience on the Le 1s is much better than the Note 3 thanks to a higher resolution screen. Software-wise, both the smartphones run Android Lollipop with their respective brand's custom UI on top.

The Le 1s is powered by a powerful 2.2GHz octa-core MediaTek MT6795T processor, which is further supported by 3GB of RAM and a PowerVR G6200 graphics processor. It comes with a handsome 32GB of internal storage, which can't be further increased by using a microSD card. The Coolpad Note 3 on the other hand offers a 1.3GHz octa-core MediaTek MT6753 processor, aided by a meaty 3GB of RAM and a Mali T720 MP2 graphics processor. It comes with 16GB of internal memory, which can be easily expanded by inserting a microSD card. Overall, performance-wise, both the devices offer quite similar experience, but the Le 1s gets higher internal memory.

For imaging, the Le 1s and Coolpad Note 3, both the devices sport similar specifications. They have 13-megapixel primary shooter with LED flashes, and 5-megapixel secondary snappers for selfies and video calling. Both the smartphones are capable of recording full HD videos, and offer HDR, autofocus, Continuous Shooting, Geo Tagging etc.etc. However, the Le 1s gets some additional camera features like 4K video recording, slow-mo videos capture and phase detection autofocus, which the brand claims to be the fastest in the world.

In terms of connectivity, the Le 1s and Coolpad Note 3, both offer dual-SIM slots, 4G LTE, Wi-Fi, Bluetooth 4.0 and A-GPS. When it comes to the battery, both are fuelled by 3,000mAh batteries, which deliver a single day of mixed usage.

The Coolpad Note 3 is among the few smartphones to offer features like a fingerprint sensor, 3GB of RAM, a large battery, a powerful octa-core processor and a large display at a pocket-friendly price tag of Rs 8,999. The Le 1s on the other hand is priced at Rs 10,999, but offers slightly better specs for a few thousand extra bucks. It is being touted as the world's first smartphone to boast a mirror fingerprint sensor, and comes with better performance, internal memory, camera specs, and a premium appealing metallic design. The Le 1s is being offered in weekly flash sales on Flipkart, while the Coolpad Note 3 is available to buy right away on several e-commerce portals without any pre-registrations.