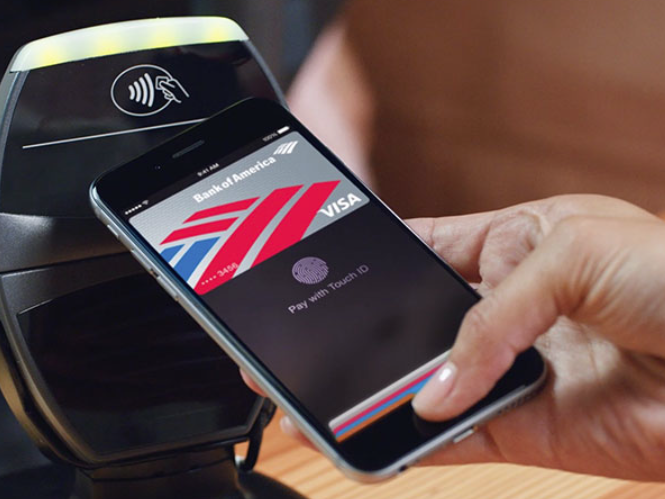 Apple Pay is a contactless payment system that is built into your iPhone; this allows you to pay in retail shops without having to get your wallet out of your pocket, ultimately creating a digital wallet. Apple Pay has been created not only to satisfy the customer's needs, but also to eliminate the use of card-based transactions. Tim Cook, the CEO of Apple has stated: "Apple Pay will forever change the way we pay for things". However, as contactless payment has been around for several years, this is yet to be seen. Only available on the latest iPhone, this teases the customer, as many are stuck in a 24-month contract.

Apple Pay is coincided with the a digital wallet. Even though the digital wallet has been surrounded by a large hype, it has already existed for several years through Android and Google Wallet. However, with an estimated 15% of phones being iPhones, Apple Pay and their digital wallet is expected to hit its target market very hard, with the app being utilised often. Indeed the news has caused much disruption at PayPal and eBay, and other e-commerce websites will be keeping a close eye on just how well Apple Pay performs.

Apple Pay is seen as being a huge success as it is not only a revolutionary product, but also highly convenient for the user. With the digital wallet being able to contain various cards, Apple Pay is pushing the use of technology in everyday transactions. Apple Pay is compatible with both the new model of iPhone and the Apple Watch. The process of paying for items is simple, all you have to do is:

With these three simple steps, you are able to pay for your items, as easy as that!

Many are asking â€˜how is Apple Pay different to any other contactless payment that still exists?' This point can be argued from both sides. Many say that this form of paying for something is exactly the same as android apps and the Google wallet; however, it may be a success due to the influence of the Apple brand.

Apple however are suggesting that through its use of Touch ID fingerprint technology and the secure NFC chip, it will be the most secure contactless payment available. As well as the security from the users side, when you are paying for a certain item, the cashier will not be able to view your name, your bank name or account details.

Apple Pay will benefit the user in many ways. With all of your cards available at a click of a button, you can access all of cards in a free and easy application.

The convenience of the product is easily explained. Many of us carry our phones in our pocket or hand all day long, with having a digital wallet on your device, means that transactions can become simple and easy.

With the payment apps being free on all devices whether it is android or iPhone, there is no excuse to add one onto your device. Ultimately, it is suggested that digital wallets will never replace the physical card, however with the ever-growing technology in the 21st century, no one will ever know until it happens.