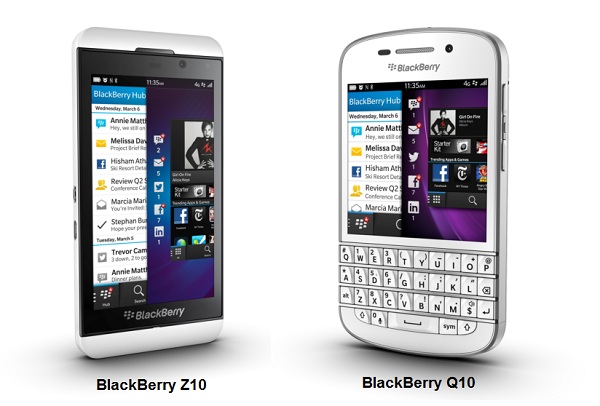 BlackBerry has made incredible progress in the past year, undergoing a significant rebranding and working to make the company truly relevant again. The BlackBerry Z10 and the BlackBerry Q10 for Verizon Wireless were both released, both quality phones, and the company is slowly making its way back into the game. Which of these two phones should you buy? Let’s look at a few of the key differences between the two devices.

As far as hardware specs, the Z10 and the Q10 are nearly identical. Both have a 1.5 GHz dual-core processor, 2 GB of RAM, 16 GB of internal space with a MicroSD card slot, and an 8-megapixel rear camera. The one main difference is the screen. While Z10’s screen is a little bit larger, the Q10’s screen is better, with more viewing angles and sharper colors. The Z10 has an LCD display at a resolution of 1280 x 768 pixels, while the Q10 has an S-AMOLED screen at 720 x 720-a much better picture.

The Q10 also gets the nod when it comes to battery life. While BlackBerry batteries are usually fairly consistent, the Z10 has only an 1800 mAh, while the Q10 has a much better 2100 mAh battery. Sometimes the specs on a battery don’t actually make much of a difference, but that is not the case here. You’ll notice the much stronger battery life on the Q10.

BlackBerry is known for its excellent hardware, and their newest devices are no different. They feel solid and high-quality. As far as which one is more comfortable to hold in your hand, the nod goes to the Z10. As far as its build and its feel, the BlackBerry Z10 resembles the iPhone, also comfortable and pleasant to hold and use. While the QWERTY keyboard on the Q10 is a nice feature, the truth is that there are fewer and fewer people who use that. Phones that have QWERTY keyboards are starting to feel old and outdated, as opposed to the Z10’s slick new build.

Which One is Better?

When it comes down to making the choice, it largely depends on what you’re looking for. The Z10 is likely to appeal to the most people. While, yes, it gets the short end of the straw on a few of the specs, it overall is much more in line with what smartphone customers are accustomed to today. The Q10 appeals to a much smaller audience base, one that would continue to choose a physical QWERTY keyboard over a newer model.

The Z10’s larger screen comes into play as well. Today’s smartphone buyers are seeking out bigger and bigger screens, and the Q10’s 3.1″ display is just not going to draw people in. In short, the Z10 is paying attention to what new customers want-a good move if they want to revive the brand-while the Q10 stays faithful to the original designs and long-time customer preferences.

Here is an interesting comparison between the two models.

For those looking for cheap BlackBerry phones to buy and not sure which one to pick-If you are a devoted BlackBerry fan who wants to keep the same classic style and feel of the handsets you’ve always had, then the Q10 will be good for you. If you’re looking for a more typical smartphone or want to switch things up a little bit, consider the Z10.

Published on behalf of Mr. Chen. He loves to blog everything mobile.