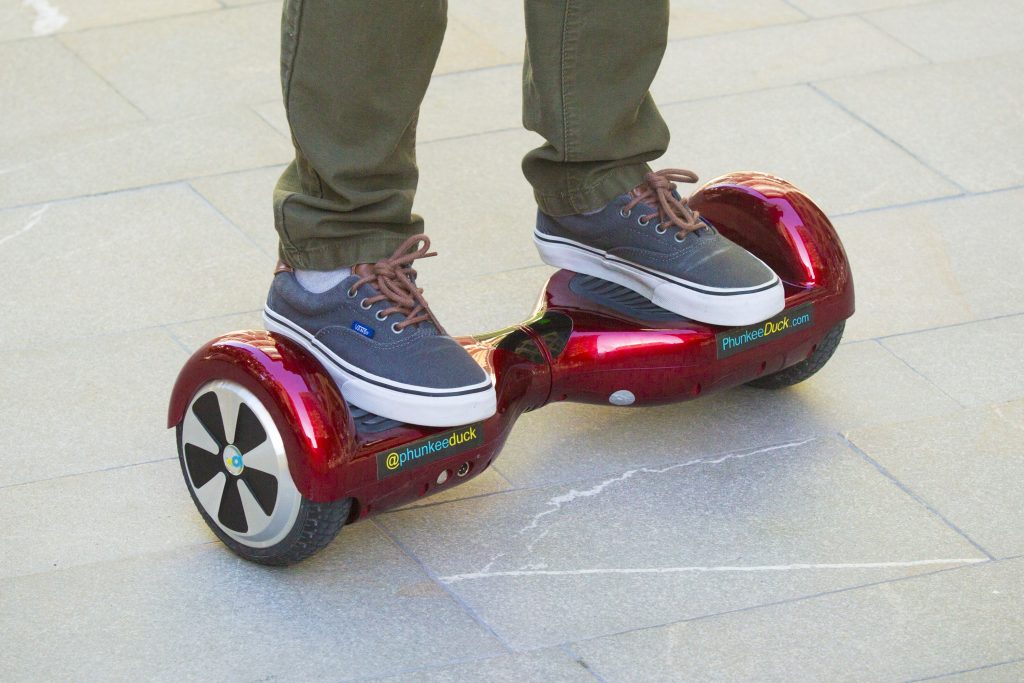 When someone mentions hoverboards, the first image that pops in my mind is the hoverboard that can be seen in Back To The Future movies. Unfortunately the hoverboards that are currently available to the mainstream are far from that. They do not hover, they have two wheels that very much so touch the ground. Today I decided to have a look and make a list of hoverboards that actually hover. It’s a bit weird thing to have to say that, hoverboards that actually hover, but that’s where we’re at. Note that even though all of the machines from the list down below hover one way or another, they are nowhere near actually looking like the one seen in Back To The Future.

You can see it in action on the video above. Hovering is made possible with the help of powerful magnetic fields. They are of course opposite magnetic fields that repel each other. It’s the same concept that can be found found in Maglev trains, only it’s been adapted to a hoverboard. This approach to a hovering hoverboard has it advantages and disadvantages.

One major advantage is that you actually hover. It’s true that the board is currently large and bulky, runs for a short period of time on a battery and you can’t easily control the direction in which the board hovers, but if you disregard all those downsides, you do get hovering. On top of all the downsides that I mentioned up until now, there’s another that’s probably the worst, this hoverboard only works on copper or aluminum surfaces.

Since hovering using Hendo employs magnetic fields, the board needs a material that will repel the magnetic field generated by the board. Sheets of copper or aluminum are currently used to achieve this effect. This sort of limits hovering area where Hendo can be used. Still it’s hovering, but if you’re interesting in owning one of these you will have to spend a minimum of 10,000$, which is what backers on Kickstarter paid to get first 10 commercial Hendo hoverboards that will be released to the market.

Next hoverboard that actually hovers is Flyboard Air by Zapata Racing.

As you can see in the video that I linked above, this hoverboard isn’t so much a board, but more a pad that has jet engines strapped to the bottom it. I’m not kidding, these are actually jet engines that are providing lift. Fuel is kept in the pilots backpack and a joystick is used in order to control how high the board is flying, its direction and of course the speed.

Unlike Hendo Hoverboard, Flyboard Air does not have any limitations when it comes to what surfaces it can fly on. That’s pretty much obvious since the levitation here is made possible with the help of jet engines. With Flyboard Air we can also talk about top speeds, which it has set at around 90 MPH. Flight time is limited to 10 minutes. Despite that, this hoverboard currently holds the world record for the longest distance crossed in one sitting, at 2.2 kilometers.

Currently this “hoverboard” cannot be purchased, not even if you have huge piles of cash, because it’s still pending proper licensing documentation from governments around the world. Even if you do manage to get your hands on one of these things, you won’t be able to hover right away. Some training is needed if you don’t want to hurt yourself, since this is a bit more volatile piece of machinery that can hurt you if you’re not careful enough.

Zapata Racing isn’t only focusing on development of Flyboard Air, which pushes air in order to achieve the hovering effect.

There is also Flyboard Pro which, like you can see from the video above, focuses on using water in order to achieve lift off. Great thing about Flyboard Pro is that it’s actually available for purchase. Price varies on where you are in the world, but it should be somewhere around 3000$, depending on what kind of additional equipment you get (in other words whether or not you buy the bindings).

Flyboard Pro is limited in the type of surface that it can hover over, just like Hendo. Only difference is that with Flyboard Pro you are limited to water. A long hose is attached to a jet ski down below which sucks in water from the ocean, lake, river, etc. and sends it up through the hose into the hoverboard.

Just like Flyboard Air, here you actually have a pad that the person that does the flying stands on. Underneath the pad are nozzles that shoot out jets of water that provide lift. Water is provided by the jet ski down below. Jet ski is unmanned and follows the Flyboard using a strong tether.

Omni Hoverboard is a propeller based hoverboard, very similar to Flyboard Air in functionality. Check it out in action on the video down below.

Hoverboard is basically a circular pad with 8 propellers strapped around it. Propeller output is controlled via a joystick. What’s interesting about the Omni Hoverboard is that it can actually be controlled like the hoverboard in Back To The Future by tilting the entire board.

When you want to go forward, you need to lean forward with the board in order to change the direction in which the propellers are blowing. This will make it move forward. Do the same thing for going back, left, right or any direction basically.

So far there is only a prototype of the board, it not available commercially. Before Flyboard Air broke the flight distance record, this is the board that held it. It managed to hover for about 275 meters before going down. Newer and improved version of this board is expected to be released soon which should be available for purchase to the general public.

It’s a bit of stretch to call Flike a hoverboard, but I have to be honest, it’s the closest thing I found that hovers and I really wanted the list to be a Top 5 type of thing.

Flike is basically more closely related to a bike, but instead of driving on two wheels it actually hovers. This is another propeller based hovercraft. Propellers are placed all around the central seating area. That’s the difference between Flike and Omni Hoverboard. Instead of a standing pad, here you get a seat in the middle.

Still there’s hovering and what’s more, Flike can hover between half an hour and up to an hour on a single tank of gas. There are control sticks for controlling speed and direction. If you planned on buying one of these, you’ll have to wait until it’s out of development and it becomes commercially available. What’s more, you will need a special license for driving this thing, since it’s a bit more advanced than previously mentioned crafts.

techandgadgetsweb is author at LeraBlog. The author's views are entirely their own and may not reflect the views and opinions of LeraBlog staff.