Those who think viruses and malware are only for desktop and laptop computers should think again; they affect mobile devices as well. According to Kaspersky, one of the leading global data security providers, some 99% of all mobile threats target Android devices. So does this mean iPhone owners are off the hook? Not by a long shot. iOS devices are just as prone to the wide swatch of breaches that can effect any computer device, namely WiFi security attacks and theft.

But even though modern smartphones come stock with decent security software and features, it is still a good idea for the typical mobile user to have a redundancy plan in place. To this end, apps work like a dream. There are many security apps out there for both platforms that have proven effective at mitigating the fallout of mobile loss and data theft. The best part? All of the below options are free.

Racking up glowing user reviews since its release a few years ago, Lookout has come to be the mobile security suite by which all others are measured. It protects the phone and all of its downloads from spyware, malware and viruses, and it offers safe mobile browsing as well. Advanced security features include a smartphone locater as well as a remote alarm system. It even comes with a full remote lock-down and Lock Cam that snaps a photo of any thief trying to use the device.

Nipping at Lookout's heels is the relatively new entry Prey. This all-encompassing security provider (it covers computers as well) puts the focus on theft and loss. Those who do find themselves without their phone but with a Prey account can remotely access the device's GPS to get a bead on its location. It also comes with remote snapshots, screen grabs of unauthorized activity, and even an option to hide Outlook and Thunderbird data. 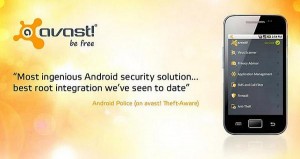 Boasting an impressive 4.6 out of five stars on the Google Play store, this Android-focused app now works with the iPhone as well. First and foremost, Avast! offers full anti-virus protection for Android devices, as well as well as the ability to filter incoming calls and text messages. If the smartphone happens to get rooted, the app will throw up a firewall in order to mitigate fallout. It even warns of infected websites. On the security side of things, Avast! comes with a tracker and remote access to the device.

From the first name in anti-virus protection comes the free lite version of their mobile security suite (the premium service costs $29.99 per year). Users of this app get malware scans on app downloads, SD card scans, browser protection, call and text blocking, remote access, remote alarm, remote camera control and more. Many users respond to the simple and sleek interface that leaves little room for confusion.

Ultimately, it goes without saying that there will be countless more security apps released in the near future, and so on and so on until the earth falls off its axis. Having said that, each of these options should prove viable for the foreseeable future.

Published on behalf of Ms. Sara Wells. She is a writer who blogs for LeraBlog and companies like Protectyourbubble.com, an ID Theft services provider.