The terms artificial intelligence, machine learning, and deep learning are hyped a lot and every now and then we hear them but most of us are either confused or don’t even have a clue about what these terms really mean. Why everyone is talking about them, are they significant breakthroughs in science about which I really need to know? The article is intended to provide introductory education to people about artificial intelligence and its relative terms.

The idea to develop an intelligent machine is lingering since the 1300s but the real breakthroughs were introduced in the 19th and 20th century. Alan Turing is considered as the father of computation and artificial intelligence because of algorithmic and computational models that were introduced with his Turing test models. This Turing test model is the foundation stone of neurons which ai neural networks that we are using today for training ai models. A book called Perceptrons published in 1969 by Marvin Minsky, Seymour Papert helped a lot to cognitive computer scientists John McCarthy & Geoffrey Hinton. 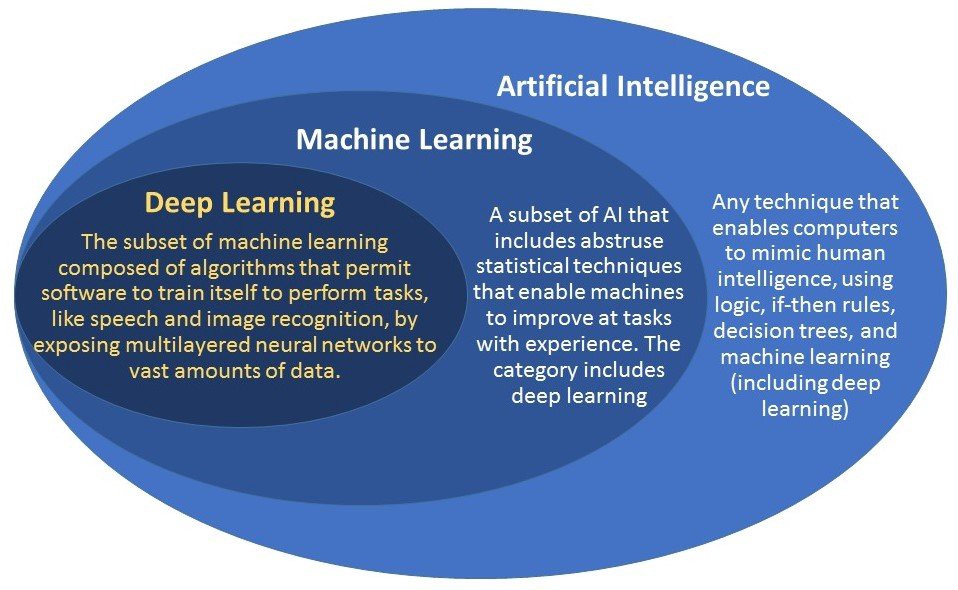 Artificial intelligence is the part of computer science where research and development are being done to make computers and machines who have the capability of cognitive thinking i.e. make machines who can perform tasks and take decisions on their own just like we humans do. As computers can perform calculations millions of times faster than humans, critical researches in medicine, quantum mechanics, quantum physics can be completed in a year which otherwise would have taken decades to do so.

Artificial intelligence can be developed with two approaches

Solving a problem from initiation to a solution for every possible move this type of approach is used in neural networks.

Solving a problem from initiation to a solution for every wrong step system is punished and for every right step, the system is rewarded this approach is called reinforced learning.

When developers can control the learning behaviour of computers then it is categorized as supervised learning. For example, Users can add or remove the word from autosuggestion dictionary of on-screen keyboards that we use in all sorts of the device, so the user is permitted to control the behaviour of the keyboard app.

Search engine’s crawler goes through enormous data available on the web and learns about the relevance of searched queries with respect to mapped data over the internet.

Machine learning is an approach of artificial intelligence where old data is fed to these models from past experiences. These experiences are used to train AI (Artificial Intelligence) models for a specific set of tasks, more the training data more the accuracy. The best part of machine learning models in artificial intelligence is that these models do not necessarily require large sums of data so therefore less complicated problems can be solved in a short span of time.

Deep learning is not just focused on a single set of problems instead it brings a broad intellectual level and intelligence for computers. Deep leaning models are trained with AI (Artificial intelligence) neural networks where a problem is solved in every possible way in which it can be solved since computer can do it lot faster than we do so after a while computer is able to draw a pattern where it knows how to proceed on next step to successfully solve the problem. Imagine a game of chess where computer plays the game with itself for every possible move from an opponent on each step then after analysing every game computer knows how to manipulate the opponent to a scenario where computer wins every time.

Deep learning can be used to analyse human DNAs to know the patterns which lead us to terminal diseases so it can figure out what needs to be done to avoid the scenarios where we get terminal diseases.

Why we couldn’t achieve the breakthroughs in AI (artificial intelligence) earlier?

Imagine a Super Car which uses high octane fuel, the car cannot give its maximum performance without a large quantity of high-quality fuel. In 1950 we neither had Super Car i.e. AI training models nor the data to achieve the accuracy with rigorous training. In the 2000’s we had the Super Car but the fuel i.e. the data was neither high quality nor it was in abundance. Therefore, experiments performed in this era couldn’t attract the limelight as the results lacked accuracy. Now high-speed data connections, large chunks of data gathered by web applications, standalone applications, mobile applications and sophisticated high-speed computers have collaboratively made it possible.

Mahipal Nehra is author at LeraBlog. The author's views are entirely their own and may not reflect the views and opinions of LeraBlog staff.