Earlier wireless networking uses 802.11n which significantly became the standard of any Wi Fi networking. This standard uses new technology and tweaks to provide higher speed with longer range for better performance for streaming media. The most notable technology was called the Multiple Input and Multiple Output (MIMO) which used different antennas to transfer several data streams from one place to another. MIMO also had the capacity to transform three streams of data and receive two. Thus this technique was able to increase the range and the distance over which data can be transmitted.

Another important technology integrated into 802.11n was channel bonding which has the capacity to use two distinct nonparallel channels at the same time to transform data. The main advantage with channel bonding is the increased amount of data that was possible to transmit. However, a third technology called packet aggregation or payload optimization was also included in 802.11n through which more data was stored into each transferred packet.

With the evolution of 5G Wi-Fi it has essentially become the next Wi-Fi standard. Among the Wi-Fi â€˜a', â€˜b', â€˜g', and â€˜n', with â€˜n' being the latest and the fastest option available across the globe. 5G WI Fi is popularly known as Wi Fi ac or 802.11ac. This is an incredibly faster form of Wi Fi to take over the â€˜n' and become the hottest network globally.

Although 802.11ac integrates similar key technologies as 802.11n, however, it does work a bit smartly.

Let us see the function of channel bonding. Channel bonding is one of the effective methods to essentially make the data rate double. Although, 802.11n is designed for both 2.4 and 5 GHz bands, the majority of the users are installing 11n only in 2.4GHz band. However, with tight channel allocation and restricted bandwidth in 2.4GHz, the channel bonding cannot function flexibly. Therefore, in case it is configured incorrectly, it can cause serious interoperability issues.

In order to prevent this issue, 11ac is designed for 5GHz band which offers several channels with extensive channel spacing. Most importantly, it is less sensitive to any kind of interference. Moreover, additional protocol enhancement is also designed to make channel bonding make less interoperability issue. This feature makes the ability of the devices whether the end-to-end channels are clear and accessible for channel bonding. Also it makes the devices to reserve extensive bandwidths in advance of data transmission. This allows channel bonding to increase even up to 160MHz in 11ac.

Even data rates are increasing as high as 6.93Gbps under certain situations; however, consumption of power will decrease for equivalent data rates making 11ac friendlier for any mobile devices. On the contrary, 11n is pushing the power limit for any portable or mobile devices to such an extent where most of the portable devices cannot take the full advantage of the capabilities of 11n. Moreover, through the utilization of several efficient data encoding mechanism, 11ac allows devices to use fewer transmission paths and simultaneously achieving higher data rate. There is 3x improvement of data rate in 11ac over 11n for the same number of Multiple Input and Multiple Output bit streams.

802.11ac has introduced several new technologies with 802.11n including MIMO to make them even more efficient. In 11n, the maximum number of MIMO was 4, but with 11ac the supreme number of MIMO streams has increased to 8. Thus, with improvements, 802.11ac has almost double the overall throughput. Besides, an increased number of streams, 11ac have also introduced advanced encoding rates while altering digital traffic for RF modulation. This advanced encoding rate has improved the overall throughput which is realized for each individual data stream. 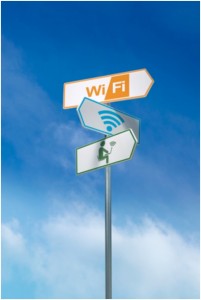 With MIMO, 802.11ac has also incorporated Multi-User MIMO or (MU-MIMO). This technology allows numerous stations to transform or receive the same data concurrently. For instance, if you are hosting a game show and want to display the game on the video screen such as iPads or on a 3D TV monitor, 802.11ac can distribute the video stream on all devices simultaneously.

MU-MIMO provides significant improvement in the WLAN throughput and thus the enhanced performance continues to develop by leaps and bounds.

The additional improvement with 802.11ac is the efficient use of beam forming and the introduction of 802.11ad which improves upon the wireless capabilities introduced in 802.11ac and 802.11n.

Steven Scheck is the Principal of Inspire WiFi, the nationwide leader of Wi-Fi networks for the multifamily, hospitality and healthcare industries. He is also very involved in philanthropic causes in Miami and nationally.

StevenScheck is author at LeraBlog. The author's views are entirely their own and may not reflect the views and opinions of LeraBlog staff.