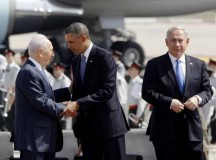 [youtube http://www.youtube.com/watch?v=EMSkkT9mPVM] Wikileaks have published a cache of Sony's internal emails which demonstrate the close relationship between Hollywood executives and the Israeli government and pro-Israeli lobbying groups in the USA. The emails reveal how Sony bosses had dinner with Israeli Prime Minister Benjamin Netanyahu and how other entertainment execs met […]