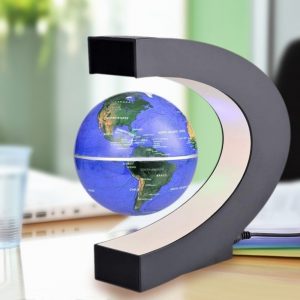 In as much as most adults think they are, well, adults, there is still a little kid inside them who loves to have fun and is fascinated by cool things. The cool thing that’s guaranteed to arrest the interest of anyone who’ll see it is a C shape LED World Map Décor Home Electronic Magnetic Globe Antigravity. It’s a home office décor you will love. Most offices are dull and lack a sense of interest or entertainment. With this device as part of the items on your desk, your office is going to be one of the most interesting and coolest in the building. Here is why.

Anything that floats in thin air fascinates its observers, regardless of whether it’s due to dark magic, magnetism, or some other unknown force. The C shape LED world map décor home electronic magnetic globe antigravity is a really amazing device. I must say though that the name is a mouth full. Saying that over and over is going to be problematic. Even typing it over and over will be a problem. That’s why for the purpose of this article I’ll be calling it EMAG (Electronic Magnetic Antigravity Globe).

One of the coolest features of this device is the fact that it floats. Just imagine it; you enter into someone’s office and there, right before your eyes is a globe that actually floats in thin air. That’s amazing, right? And that’s exactly what this device does. It employs the laws of electricity and magnetism to create a magnetic field around the globe that gets it to float in plain sight. Unless someone is aware of what’s happening in the background, one can actually conclude that it’s magic. And if floating is not enough, you can even get the globe to spin around, just like the way the earth rotates on its own axis. It’s like watching the earth spin from a distance. Trust me, it is a beautiful spectacle.

Furthermore, you can make things even more impressive. I bet you noticed the term LED in the title of the article as well as the original name of the device. EMAG actually comes with an LED light, which means it glows. Placed in a dark room, or if you turned off the lights in your office and it is completely dark and you let it do its thing, it’ll look as if it’s actually floating in thin air. This will be so because the table its place on won’t necessarily be visible and the entire thing will just seem like it’s just floating in space. This device will blow away the mind of anyone who witnesses it in action. 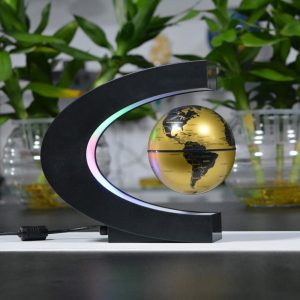 EMAG is a perfect gift for anyone, whether young or old. Children will love it, although they are more likely to shorten its life spun due to too much curiosity and also the fact that they won’t let it just float. Adults and the elderly will just love to have this thing in their offices or whatever space they would love to have it. It’s the perfect gift for those with offices because the chances of you finding a globe in other rooms of a house or any other building are really small.

EMAG comes in two main colors; Gold and Blue. Depending on your taste, you can choose the color that suits your needs. It’s an electric device, so an electric power source will be necessary. It’s made of ABS plastic, metal, and its rubber oil coated.

With EMAG in your office or personal space, you will never get bored. It’s a good device to help you think and brainstorm. When you are looking for ideas on how to solve a problem, you can spin it and watch it rotate as you come up with ideas on how to tackle your issue. When you are bored, it can entertain you even if it’s just for ten minutes. Sometimes, that’s all you need. When your kids visit the office, it’ll keep them busy while you deal with a client. And sometimes you’ll just want to spin it because, well, it’s just fun to watch it spin. As I sign out, I believe you agree with me that the C shape LED world map décor home electronic magnetic globe antigravity is one of the best and most entertaining devices or gadgets anyone can have in their office.