The offer of Spotify is great, the selection is enormous with over 30 million songs. As a music lover I am thrilled. I listen to and discover music that I would probably never have heard of otherwise.

But of course, the question arises to me: how many songs can I actually store in my music collection and hear offline?

What is offline mode anyway?

If you have a premium subscription for $9.99 a month, then you can save your playlists and albums on your smartphone so you can play them without an internet connection instead of streaming them as usual.

For example, if you go on vacation and you do not have a network, a stable connection, or just a data roaming option, then offline mode is fine. For example, I have a 3GB data option on my mobile phone contract, but in my music consumption this would be very quickly used up with pure streaming over the mobile network.

How can the songs be saved offline?

The playlists and albums can be saved on the smartphone by sliding the slider to the right in the playlist at the top, directly below the green shuffle button, with the “Offline available” option. By default, the songs are only downloaded via Wi-Fi, which makes sense.

But once you are on the road the insatiable desire to download a playlist on the mobile network, then you can adjust in the settings under the point “Music quality” -> “Synchronize over mobile network”.

Before you download the songs, be sure to set the sound quality. Under “Settings” -> “Music Quality” you can choose between “normal quality” (96kbps), “high quality” (160kbps) and “extreme quality” (320kbps) for streaming and downloading.

My tip: “Normal quality” for streaming on the go, “Extreme quality” for downloading the songs via Wi-Fi. The offline mode ensures carefree mobile music enjoyment without nasty surprises in data consumption.

Spotify: how many songs can I save offline? 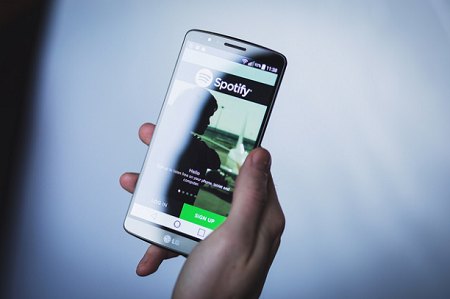 Spotify itself provides the following information about this question :

“With a Spotify Premium subscription, you can sync up to 3,333 tracks from the Spotify catalog on 3 different devices (smartphone, tablet, computer, etc.).

This is a bit flippant formulated, and this limit attracts the displeasure of some heavy users. Particularly annoying with this limitation is the circumstance that neither the programs on the desktop nor the apps for smartphones point to this limit.

At some point, albums simply will not be saved anymore or already saved ones will disappear again from the music collection, as the limit has been reached in the meantime.

And also the number of 9,999 songs is not correct . Because technically Spotify does not count the songs, but so-called items. An item is not just a song, but also the album title or the name of the playlist, for example.

The limit of 10,000 songs apparently comes from the technical playlist approach of the streaming provider, because such a list can hold a maximum of 10,000 songs. Respectively 9,999 songs plus the title of the playlist, which makes a total of 10,000 items.

Behind the scenes of the software, your own music collection seems to be handled like a huge playlist. Of course, this restriction is very annoying and, above all, paying premium customers feel unfairly treated in terms of the limitation.

Spotify sees no need for action

The Spotify team is well aware of this problem, but we do not see any need for action here for the time being  :

“We’ve just reviewed this internally and at the moment we do not have plans to extend your music limit. The reason is because less than 1% of users reach it. The current limit ensures a great experience for 99% of users instead of an “OK” experience for 100%. ”

This entry dates back to September 2015, and if I read through the comments, not much has happened in this regard until today.

Now, of course, the question arises for you: are you among the 1% of music lovers with such a rich musical taste that 9,999 songs are not enough for you (or 3,333 songs on the go)?

Then maybe you should test Apple Music, because there you can download up to 100,000 songs . Personally, I’ve been using Spotify for about seven years now, and I’ve never hit the limit. But Android user are lucky as always, they can download Spotify Premium app offline and use it without paying a single penny.

I definitely hear a lot of music. But I also delete albums and playlists again and again. And I continue to use MP3s, because I like to own the albums that I like.

Soundever is author at LeraBlog. The author's views are entirely their own and may not reflect the views and opinions of LeraBlog staff.