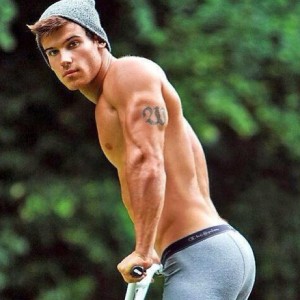 According to one survey, about ten percent of all online dating profiles are fake. That means that about 1 in 10 of the people who might message you online aren't swinging singles ready for some romance, but rather bots, scammers, and other unsavory characters who are hoping to pry personal information out of you. This creates problems for honest daters who have to sort the bad eggs from those who sincerely want to make a connection. Fortunately, the majority of phony profiles give themselves away with a few telltale signs.

The next time some tall, dark, and handsome stranger messages you, look for these serious red flags to see if you're dealing with a fictitious person.

When you're running a shady online operation looking to dupe online daters, you don't have a lot of time to spare. So you cut corners wherever you can, hoping to rope in as many people as possible. One of the most common shortcuts that scammers make is through the online profile. Rather than actually filling out each section in hopes of helping you understand who they are as a person, they will just do the bare minimum. If you notice that their profile is lacking basic info, it's a sign that it's fake (or they're lazy, which isn't good either).

2) They Don't Pass a Background Check

Online dating phonies might be able to fake a lot of things, but they aren't able to fabricate public records. If you suspect that somebody might have a totally concocted identity, you can verify the truth by checking local, state, and federal records. A people search service like Instant Checkmate can tell you who's real and who's just faking. Plus, if they are real, you can find out if they have a history of committing identity theft or other not-so-nice crimes. It's a simple and fast way to filter out the duds in your dating pool.

Online fakers are a lazy lot, and they don't want to spend the time required to craft a personalized message to every single online dater they want to swindle. So instead they'll just write one and copy/paste to every single new profile they come across. If someone sends you a message that is suspiciously generic, almost as if you could send it to a thousand other online daters and it would apply to all of them, that's a good sign that they aren't particularly interested in you as a person.

People who have a tale of woe to tell will usually wait until they get to know you better before spilling their guts. People who set up fake profiles, however, want to earn your sympathy as quickly as possible. So they will often concoct a story about how they were widowed, or triumphed over adversity, or spin some other yarn designed to tug on your heartstrings. That's not to say that all sad stories on dating profiles are fake. Just that you should remain alert for other problems if it appears like your suitor is trying to win you over by taking advantage of your natural empathy.

Published on behalf of Mr. Frank Grimes. He is a blogger living in Springfield, Missouri. He writes about online dating, relationships, and social media.