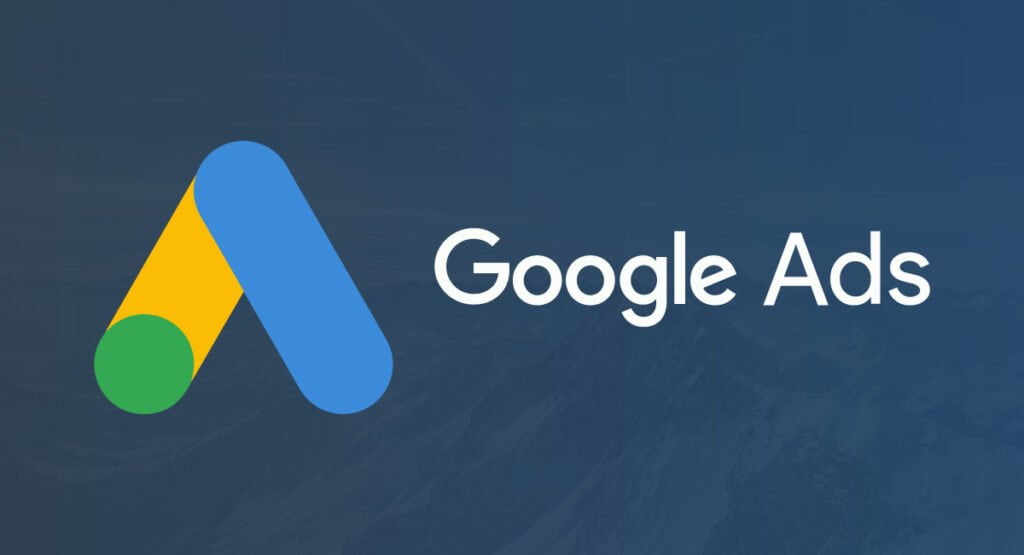 COVID-19 shock has passed, but it still has impact In April 2020, we conducted a study on how COVID-19 is impacting Google Ads advertising. For industries such as Travel, Fitness, Dinning, and Construction, the pandemic has become a real shock, dropping business performance crucially. According to Statista, 89% of marketers delayed campaigns or put them under review.

However, it is not all bad. Branches like Delivery Services, Sports Equipment, and Online Education received an impetus to develop.

Time has passed, and things have changed. We’re used to wearing masks, observing quarantine mode, and not sweeping products off the shelves after another outbreak of disease.

The virus has become a part of our life, though not the pleasant one. In this regard, we decided to conduct a more extensive study covering the period from October 2019 till November 2020.

We’ve analyzed 30,000+ Google Ads accounts linked to PromoNavi and uncovered the major trends in ad spend and performance change across various stages of the pandemic.

Let’s dive into what we’ve discovered…

The Ad Spend Is Not Influenced by Disease Rate, But Likely Lockdown Policies

The impact of the first illness cases on the economies was sufficient, especially when the virus began to spread in Europe. By the end of March 2020, the overall ad spend decline, compared to the previous month, was about 30%.

Businesses were frustrated. It seemed that further decline was inevitable. But the reality turned out to be different. The bottom was reached in March, and, since April, we observe sustainable recovery. 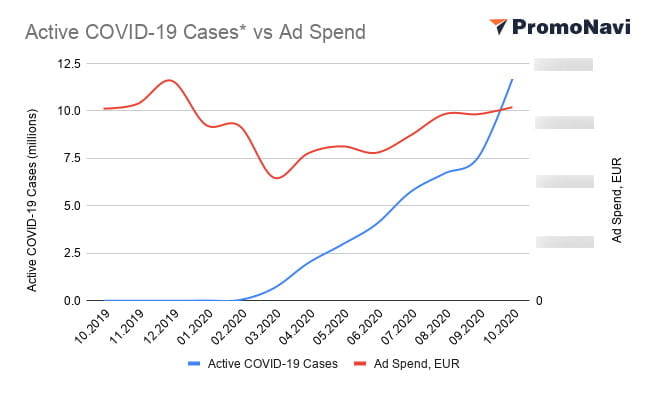 Ad spend more likely is influenced by the disease rate dynamics rather than the number of active cases. And this has its logic: a sharp jump in the number of cases forces governments to tighten quarantine measures, which results in stagnation in “sensitive” branches.

However, the COVID outbreak at the beginning of autumn brings no serious consequences for advertisers. The ad spend in October 2020 was 3.7% higher than in September 2020, and even 0.7% higher than in October 2019, meaning that advertisers are reaching the pre-crisis turnover. This is the highest level of ad spend since the beginning of the pandemic.

It is difficult to predict how things will change further. We assume that increasing demand before the Christmas holidays will have a knock-on effect on the economies, particularly on advertising. In PromoNavi, we expect further growth in advertising costs, despite the local lockdowns.

Let’s look through the changes in Impressions compared with Ad Spend. 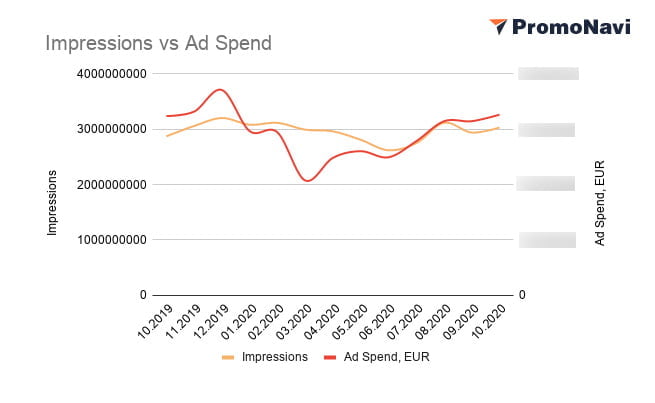 In March and April, Ad Spend decreased faster than Impressions. Here we can observe how Google’s algorithms work. While Impressions were relatively stable, Google had to sell the inventory at lower prices. The Average CPC decreased in March by 23.5% compared to February.

This gap remained until June, meaning that advertisers who continued to show their ads were able to drive traffic on a lower CPC.

Another observation is that Conversions remain stable during the whole year. Advertisers reduced costs primarily on Display and other brand campaigns with low Conversion Rates, focusing on Search Ads. 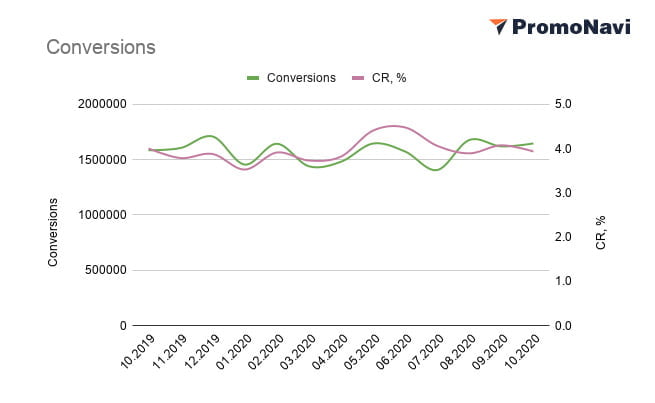 Besides, difficult market conditions forced advertisers to quickly optimize campaigns and find conversion growth points. That is why, from May to June, we see a “delayed” Conversion Rate growing. To put it simply, advertisers got a good kick to become more effective.

The Affected Industries Strive For Recovering

Travel & Tourism is one of the industries that crashed during the March COVID outbreak. The decrease in Ad Spend was crucial: advertisers reduced their costs by almost 50%. The CR followed the costs, decreasing to 3.2% in March. 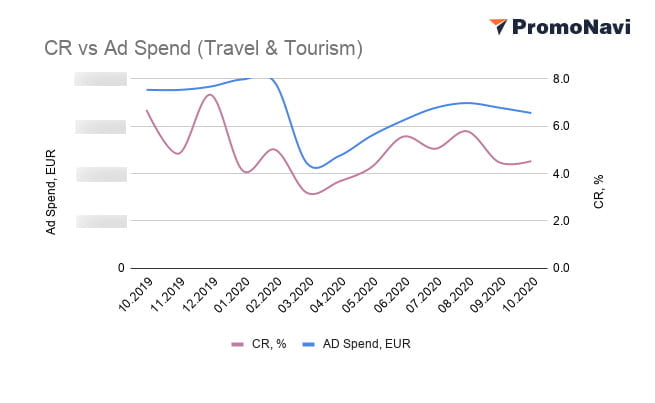 However, removing restrictions by summer influenced the beginning of industry recovery. While the borders remain closed, many companies focused on internal tourism, thereby supporting sales. As a result, the summer was not so bad. The ad spend permanently increased, peaking in August.

September and October were not as optimistic as August, but we can do nothing with seasonal factors that negatively impact the Ad Spend in Travel & Tourism.

The other suffering industries showed similar trends, with some differences, of course. For example, Sport & Fitness adapted its business model by providing online training. Restaurants supported sales due to delivery services. Combined with the adaptive quarantine instead of the total one, this led to a step-by-step recovery. 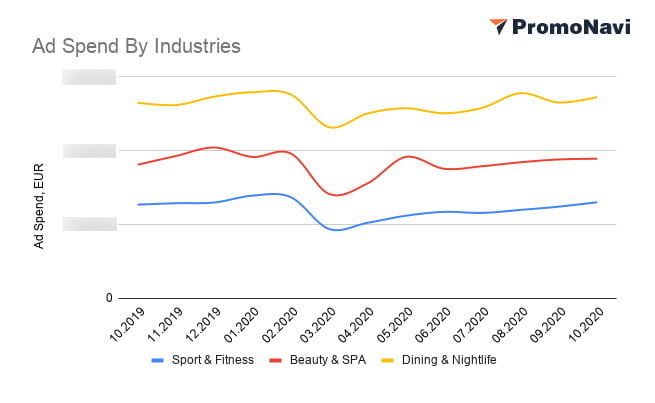 Please note that there is pent-up demand in some industries. For example, there was a boom in Beauty & SPA after the total lockdown in the spring. Keep this in mind when planning your advertising costs.

The Booming Industries Are Not Hurrying into Fall

Some industries are doing well during the epidemic, while others even received a serious impetus for development. The latter include, for example, Delivery Services, Sports Equipment, and Health Insurance. 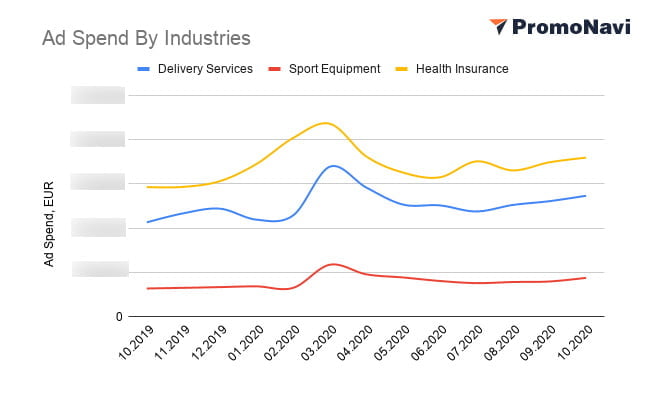 These industries show extremal growth during the first wave of the pandemic. Later, there was a drop. However, the ad spend was higher than in months before COVID.

There are a few takeaways: