Santiago de Compostela is the heart of Galicia’s culture. Each and every one of the city’s attraction echoes what you can expect as a tourist when traveling across the region. If not for the cathedral and its major role in the Way of St. James, a good reason to travel to Santiago, Spain is that it perfectly sums up Galicia in one beautiful city.

Santiago de Compostela may be a “big village” as locals would say in jest, but it has a sizeable reputation among the thousands of tourists who come by every year. All pilgrimage routes of El Camino de Santiago or “The Way of St. James” lead to this single destination. For the peregrinos (pilgrims), it is where their sacred sojourn ends. But for any curious traveler asking what to see and do in Santiago de Compostela, Spain, the end of this pilgrimage marks the beginning of a deeper exploration of the city. The cathedral in which the relics of St. James the Greater are kept is but one of its main attractions, and there’s much more to see in this touristy capital of Galicia. 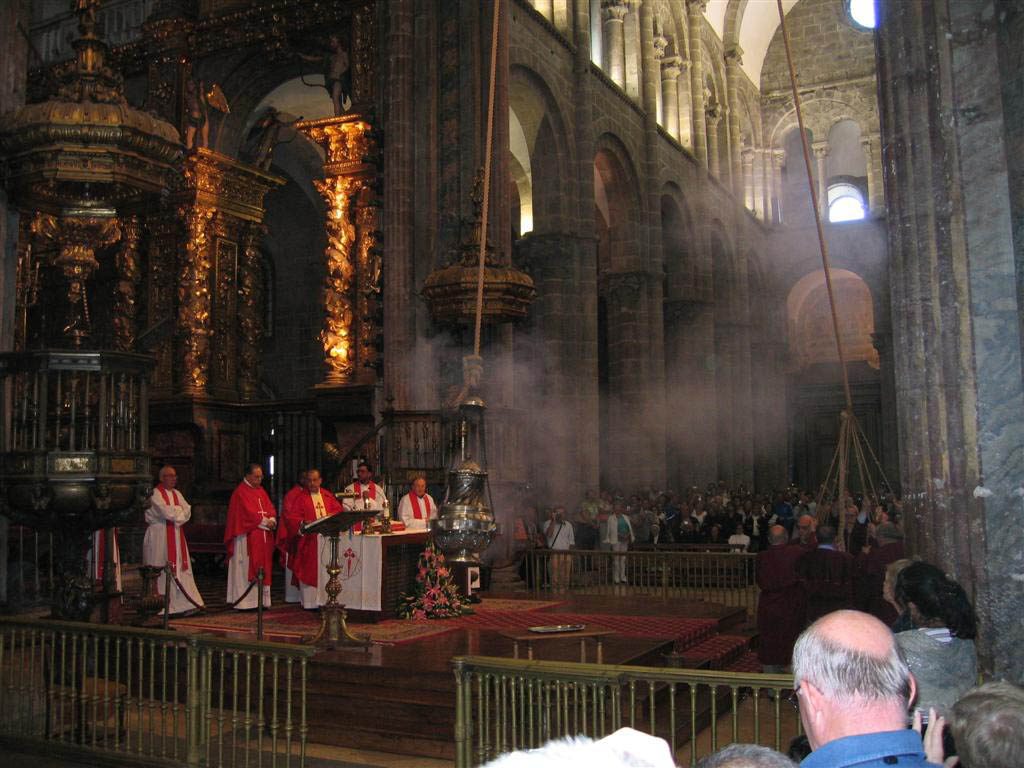 It is mainly a Romanesque-style cathedral with Baroque and Gothic features. Each of its four façades flaunts a style from a different era and has its own adjoining square. Namely, they are the Baroque Obraidoro (west) and Da Quintana (east), the Romanesque Das Pratarías (south), and the Baroque and Neoclassical Da Acibecharía (north). If you’re obsessed with details, the façades’ varying elements both in their interiors and exteriors would make for an enjoyable visit.

Amidst the dozens of attractions within and around Santiago de Compostela Cathedral, there are only three you shouldn’t miss. First of which is the 12th century Pórtico da Gloria just behind the main western façade. The Portico of Glory is renowned for its intricately carved tympanums and column sculptures. Important personalities and hair-raising motifs from the Holy Bible are depicted in them. The Chapel of the Reliquary is another must-see in the cathedral. Here you will find an 8th century gold crucifix containing a fragment of the “True Cross” where Jesus was crucified. Last but not the least is the crypt underneath the main altar. This is where the relics of St. James the Greater and his two apostles, St. Theodorus and St. Athanasius, are to be found.

As soon as you finish delighting in Santiago’s Cathedral from every imaginable angle, explore the surrounding historic district of Zona Valle where the city’s casco antiguo or Old Town is located. Most of the Old Town has been closed off from traffic, so it would be safe to walk along its winding granite streets, across beautiful archways, spacious squares, and historic monuments such as Casa del Deán. Aside from the cathedral, you can pay a visit to any of the museums in the area, as well as one of the world’s oldest universities that remain in use, the 16th century Universidad de Santiago de Compostela.

Rúa Nova and Rúa do Vilar, two major streets parallel to one another, are particular points of interest on the south end of the town. These stone-paved roads are decorated on either side with arched, covered walkways called soportales. The soportales not only provide good shade from rain or the sweltering sun, for underneath these arcaded streets are cafes, restaurants, and boutiques where you can shop and dine.

The former Dominican farm and cemetery were reinstated into a park where some of the most popular Santiago landmarks are located. Within St. Dominic’s Monastery is a Gothic and Renaissance church that remains closed to the public, and the Pantheon of Illustrious Galicians which serves as a tomb for several local personalities. One architectural feature you shouldn’t miss is the triple-helix staircase by architect Domingo de Andrade.

The Museum of the Galician People is also inside the Baroque Convent of Santo Domingo de Bonaval. It highlights the region’s history, culture, and traditional customs. Right beside it is the Galicia Contemporary Art Centre (GCAC) which showcases modern day art and reveals a stark contrast to today’s culture.

The street’s name harkens to a time when French pilgrims used it as a pathway to get to the cathedral. Nowadays, Rúa do Franco is the hub of Santiago’s foodie and wine culture. Tourists and locals alike flock in this part of the city for a few drinks, or perhaps to enjoy Galician delicacies – many of which involving seafood such as shellfish and octopus.

The casa was an aristocratic house back in its heyday and is now used for art exhibits. It was built in the midst of Plaza de las Platerías during the mid-17th century. Considered to be one of Galicia’s finest examples of Baroque architecture, it should be no surprise that its awe-inspiring beauty was immortalized by Spanish author Valle-Inclán in his work, Mi Hermana Antonia.

Situated in Plaza de la Colegiata de Sar on the outskirts of Santiago’s Old Town is the Collegiate Church of Santa María. Built in the 12th century, it features the usual Romanesque architecture of its time, but with the addition of a tower and flying buttresses from the 17th and 18th centuries. The church’s side windows and rose window create a play of light on its interiors, illuminating the barrel-vaulted naves, ribbed arches, beautifully carved capitals, and the outstanding cloister. Outside, the arcaded colonnades offer relaxing views of the groomed garden.

You can visit the church anytime during the day since it is kept open for public viewing.

Pazo de San Lorenzo is set in a thick oak forest right outside the walls of Santiago’s casco antiguo. Recognized as a national monument of Spain in 1979, it was formerly a hermitage dedicated to St. Lawrence before it was converted into the Franciscan Monastery of San Lorenzo de Trasouto and then later, into a private palace. It was constructed in the 13th century during the medieval era and boasts a Romanesque-style architecture much like most historic buildings in Santiago de Compostela.

Sadly, the palace is only accessible to tourists upon appointment, since it is currently used as a hotel and a venue for private gatherings. But if you do get a chance to visit, make sure to see the main altar’s 16th century Italian Renaissance altarpiece made of Carrara marble, the two side altars in Sevillian Baroque style, the 16th century carving on the epistle, and of course, the idyllic gardens surrounding the complex.

lesliegilmour is author at LeraBlog. The author's views are entirely their own and may not reflect the views and opinions of LeraBlog staff.