Chiang Mai, the rose of North as it is referred, is an ancient city nestled in mountains of Northern Thailand. City is dated back to 1296 AD when it was built as a walled city; a combination of old city in centre and New city build around the old city, gives a magnificent combination of Ancient arts and modern day architecture. History, preserved culture, modern metropolitan city and outside the premises of city nature in its purest form with all greenery, wild rivers, treks and rough mountains make Chiang Mai a dream place for nature explorers, culture enthusiasts and city connoisseurs. A chat with the down to earth inhabitants of city, monks in the temples, tribal in mountains and tourists from across the world makes a journey to Chiang Mai, a life time experience.

Experience Nature in its purest form

Chiang Mai is surrounded by some of the most breath-taking scenic views. City is surrounded by a number of national Parks. National Parks reflects the classical Northern lush green look. Dense forests, adventurous trekking routes, eye catching waterfalls making them perfect spots for picnics and camping.
Immediately outside the premises of city is situated the Doi Suthep-Pui National Park, famous for many waterfalls, statues of Kruba Srivichai, “the builder monk"; a number of temples high in Mountains and signature trekking routes. Doi Inthanon National Park in South of city with highest mountain in Thailand, magnificent waterfalls and a camping ground is nectar for tourists. All in the vicinity of city are some dozen Parks, giving Chiang Mai a unique identity in Tourism world.

Chiang Mai is home to a diversified graceful and refined culture. From ancient Lanna kingdom to golden ages of Sukhothai, Ayutthaya and more recent times, Chiang Mai culture has developed, evolved and grown more colorful. Traditional music, Thai dance, museums rich in arts, social graces like Wai gathering are unique to Chiang Mai. Mountains in North are home to all ancient 6 hill tribes with their own preserved and distinct culture, appealing to the appetite of culture explorers. The rich culture Chiang Mai holds, make it different from any other tourism destination.

The Lanna kings, the once ruler of North have left Chiang Mai with a multitude of Temples. These Temples are embellished with mirrored mosaics, chimed rings and gabled rooftops soaring high, giving a reflection of 13 and 14th century architecture. The intricate carving and spectacular handmade paintings inside temples are a treat to watch.
Over 200 Temples in and around Chiang Mai makes it a spiritual city with all its charm. Temples like Wat Chiang Man, were built in 13th century. Monks in the temples offer mediation courses to tourists, if they are willing to feel more than just visiting and applauding the architecture wonders of Chiang Mai. The Chiang Mai City Art & Cultural Center in old Provincial Hall hosts a permanent culture exhibition, giving an opportunity to cherish the rich history, arts and architecture of North. 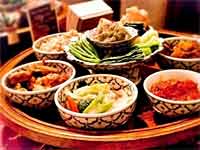 Like its distinct arts, architecture and culture, Chiang Mai food is also different and a reason to attract the tourists. Khao Niao (sticky rice) is the signature staple of Chiang Mai, eaten with a range of Chili dips, unique only to North! A range of dishes, tourists can cherish include Khao Soi (Egg Noodle Curry), Sai Oua (Grilled Herb Sausage), Gaeng Hang Lay (Burmese-style Sweet Curry ) and Larb Kua (Pan-fried Spicy Meat Salad). Eating Chiang Mai food is on the bucket list of many pro tourists.

For many travelers, ridding on the back of Elephant is one of the main reasons that attract them to Chiang Mai. On every corner, a billboard touts elephant rides or shows. A journey to Chiang Mai without visiting an elephant camp is incomplete!

A visit to Chiang Mai, commonly referred as the culture capital of Thailand, is an equally life time experience for both culture enthusiasts and adventure seekers. Listening to the stories of Hill tribe people, an exciting elephant ride in North, uncovering the beauty of nature on trekking trials, all coupled with the taste of Thai food makes Chiang Mai a bucket list visiting site. With so much fun ahead, there is little time to waste. Plan your tour, pack your bags, cut your tickets and head to Chiang Mai!

pibanyen is author at LeraBlog. The author's views are entirely their own and may not reflect the views and opinions of LeraBlog staff.