Ethiopia is on its way to becoming one of the top tourist destinations in Africa. The county's capital Addis Ababa, once known as Abyssinia, is a modern city typified by low-rise accommodation blocks and busy, traffic-jammed main streets. Founded as recently at the late 19th century, Addis Ababa is built high up in the Semien Mountains and is, after La Paz and Quito, the third highest capital city in the world. Thanks to its high altitude location and fledgling status as a tourist destination Addis Ababa and Ethiopia as a whole have a lot to offer the adventurous traveller. 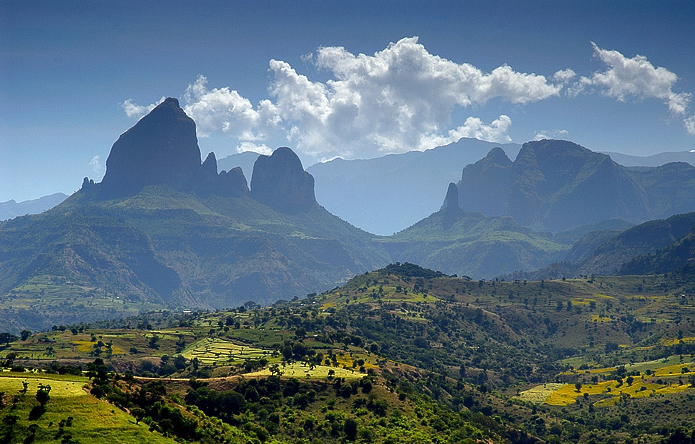 For dedicated hikers, trekkers and mountain climbers, the Semien Mountains are a great location for some seriously challenging hikes and climbs. If you're more interested in taking in the sights with a slow hike than hanging off the side of a mountain, the lush green Bale Mountains offer good hiking opportunities. It's worth using the services of a professional tour guide in Ethiopia to make the most of this region.

The southern part of Ethiopia offers good value safari tours where you can see elephants, baboons, monkeys and rare species of big cats in the wild. By visiting certified wildlife reserves you are playing your part in protecting some of Ethiopia's many endangered species. For bird-lovers Ethiopia is a paradise as there are over 800 species of bird indigenous to Ethiopia.

Believed to be one of the oldest locations of human life, Ethiopia's human history can't stretch back any further. One of the most powerful places on earth around the 3rd and 4th century, Ethiopia's recent past is a chequered one where periods of peace and prosperity have been interspersed with civil war and a series of devastating famines. The ruling powers of various periods in this country's history can be seen all over in its castles, monuments and churches.

The second earliest known adopter of Christianity as its state religion, Ethiopia has a deep rooted connection to organised religion. Within this diverse country there are also large number of followers of the Muslim faith and traditional African religions. Generally tolerant of believers and non-believers alike, you won't have to go far in this spiritual location to find a place to pray to whichever god you choose.

Don't bother trying to learn any local lingo before you head off for a holiday in Ethiopia, it is believed there are up to ninety unique languages spoken across the country. The two most spoken languages are Oromo and Amharic. Using a professional tour guide in Ethiopia is a good idea, but don't be afraid to venture out on your own as English is used in most high schools and is the most widely spoken second language.

Although Ethiopia's heart-breaking battles with famine are well known worldwide, thanks in part to the efforts of Bob Geldof's Live Aid in the 1980s, they of course have their own unique cuisine. Meat stews make up a big part of the diet in this part of the world, often served with flatbread. It's rare to find anywhere serving pork or shellfish as the dominant Orthodox Christian, Islamic and Jewish faiths forbid it. Don't be afraid of being impolite, it is almost universal to eat this type of meal with your hands and it is a common custom for diners to feed each other.

The information in this article was provided by tourhq.com.