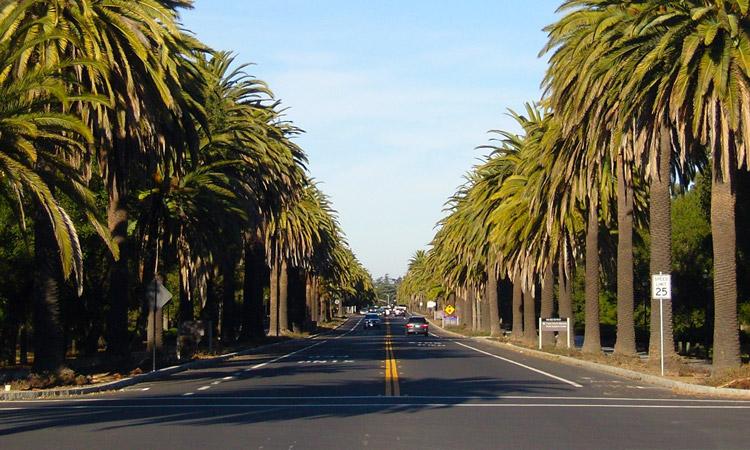 One of the most interesting places to visit in the San Francisco Peninsula is Palo Alto, the home of Stanford University, electric automaker Tesla and Hewlett-Packard. The area is called the “Birthplace of Silicon Valley,” where plenty of the world’s most popular technology is designed. The town is located in the South Bay Peninsula area. Here are things to consider when planning a visit to one of the world’s wealthiest communities.

Palo Alto offers unique points of interests not far from the luxurious The Nest Hotel. Frenchman’s Tower, built in 1875, is an historic Gothic-influenced landmark made of brick. It’s a round two-story building where visitors carve their names on the exterior. Interestingly, it’s a building without doors and is connected to underground tunnels. Much mystery and folklore surrounds this structure.

It’s a great place for hiking, bike riding and admiring scenic beauty. The area offers over 15 miles of walking trails. Some of the most picturesque destinations include Arastradero Preserve, Elizabeth Gamble Garden and Palo Alto Baylands Nature Preserve. Public transportation includes trains and buses, but you’re also likely to see many people on bicycles. At the same time, it’s not a very crowded town, as its population is about 65,000.

Since it’s near the Bay, there is usually fog throughout the year with temperatures that usually don’t get too hot or too cold. There are noticeable precipitation levels in all seasons except summer. Redwood City, which is within 10 miles, has been the site where several major films have been shot, such as scenes from Harold and Maude, Mrs. Doubtfire, Shrek, Shark Tale, Madagascar and Over The Hedge.

Landmarks in Nearby Cities

Palo Alto is within a 30-minute drive of several giant tech company headquarters. Keep in mind if you want to go on a tour of a place like Googleplex, you must be escorted by an employee. Here are HQ offices and other points of interest.

Stanford University is one of America’s most prestigious universities and is Palo Alto’s top employer with 11,500 employees. It’s worth visiting if you’re a fan of inventions since it was one of the first three hubs of the internet back in 1969. The campus was built by railroad pioneer and California Governor Leland Stanford, who named the institution after his son. It opened in 1891, the same year that future president Herbert Hoover enrolled.

The campus, which is easily the region’s most prominent landmark, encompasses seven schools and 18 interdisciplinary institutes. Its number of students is equivalent to nearly a quarter of Palo Alto’s population. The university is rich in scientific history, such as the first synthesis of biologically active DNA, computer time-sharing and early stem cell development.

Two of Stanford’s most historic places include Hoover Institution and Stanford Research Institute, now known as SRI International. Hoover Institution, named after the former president, is a vast library of archives of global political research. SRI is a nonprofit scientific research center located in nearby Menlo Park. It’s famous for many things, including the meeting place for Walt Disney to discuss feasibility studies for Disneyland. The first mobile robot named “Shakey” was developed at the research center.

The world’s most famous search engine, Google, was developed at Stanford by students Larry Page and Sergey Brin in 1996. Many people don’t realize President Kennedy also attended the campus briefly after graduating from Harvard. Other famous alumni from the university include:

Palo Alto represents the crossroads of nature and technology. It’s in one of the most beautiful parts of America and is near many historic places. Travelers who want to experience Bay Area culture will find it to be a relaxing getaway that’s peaceful but not too far from world class city life. Consider it for a vacation destination where you can enjoy exploring sites where many modern ideas and pioneers came from.